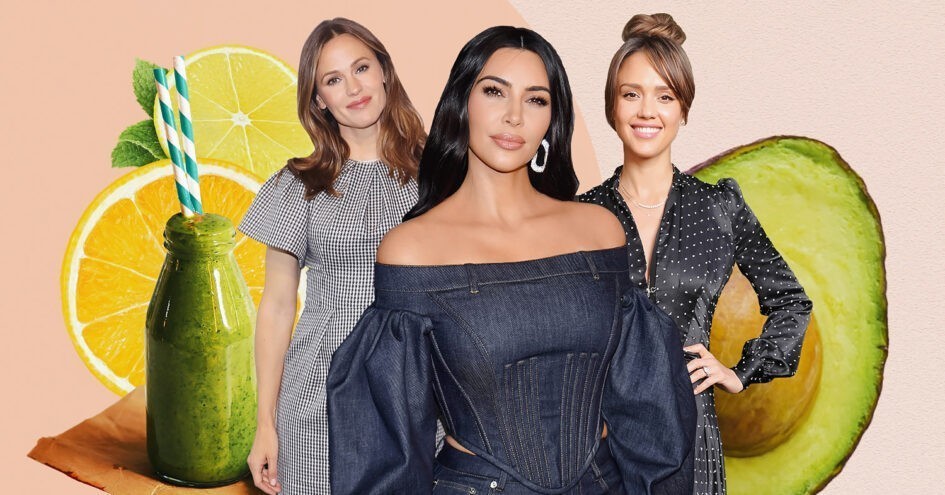 Celebrities have a lot of “secrets” to their health and beauty regimens—rare elixirs, special tonics, good genes, wealth and access, to name a few. But one is available to all of us too: plants. That’s right, the nutritional superpowers of plants are undeniable. They can boost energy, eliminate toxins, and make your skin glow. And the more, the merrier, which is why the smoothie is the perfect vehicle to pack as many plants as possible into a single meal. We tracked down the favorite smoothie recipes of 10 celebrities to share with you. While we can’t promise you’ll get skin like Jessica Alba or Kim Kardashian, you can share in one routine these and other celebs swear by. Here are the best celebrity vegan smoothie recipes.

The model is partial to a drink called the Heavy Metal Detox Smoothie, which she drinks every morning. The beverage, from author Anthony William, combines bananas, wild blueberries, cilantro, barley grass juice powder, spirulina, and Atlantic dulse, which is similar to seaweed.

“This smoothie is full of lots of vitamins and minerals. As Anthony explains, it is antiviral, anti-bacteria and really healthy for you,” Kerr explained on her Kora Organics website in August 2020. “Each ingredient has a different strength for removing metals from the body.”

The Alias alum, who loves to experiment with vegan dishes, crafted her first recipe for her Once Upon a Farm brand in 2019. She shared the results in a January 2020 Instagram post, which also delved into a bit of the star’s family history. “My mom grew up really poor on a beautiful farm in Locust Grove, Oklahoma, where my uncle Robert and aunt Janet now live,” she explained. “A year ago I said to them: ‘Hey guys, you wanna plant some Koginut squash for Once Upon A Farm?’ And they did! We harvested it and it was beautiful.”

As Garner explained, she was able to create her “first-ever recipe” using that hearty squash grown on her family’s farm. And, she developed a smoothie for Once Upon a Farm called Farmer Jen & the Giant Squash, which contains squash, apple, cinnamon, dates, coconut milk, and oats.

While Garner is a fan of all of the Once Upon a Farm smoothies, it’s clear that this one holds a special place in her heart. “100% of the 12,000lb of squash used in #FarmerJenandtheGiantSquash was planted, tended to, and harvested by Robert, Janet, and (on several occasions) ME!” she explained in the Instagram caption.

The Morning Show actress shared her go-to morning smoothie recipe on Instagram in May 2020. The vegan drink, which Witherspoon noted she’s enjoyed “every single day” for nearly a decade, was inspired by nutritionist Kimberly Snyder’s Glowing Green Smoothie recipe. It’s made with hearty ingredients such as spinach, romaine lettuce, celery, an apple, a banana, a lemon, a pear and coconut water.

Witherspoon also suggested tossing in some protein powder, almond butter, flax seeds, or any other greens you might have in your refrigerator.

According to the Academy Award-winner, she was inspired to make this smoothie a part of her regular diet after being influenced by another boldface name. “The person who told me about this recipe for the first time was Kerry Washington,” she explained at the time. “I sat next to her at an awards show and I didn’t really know her but I was like, ‘Your skin is so beautiful. What do you do?’ And she said, ‘I think it’s from this drink!’”

The supermodel loves to start her day with a plant-based smoothie. She posted the recipe for one of her favorites on Instagram in May 2020, writing that she was “kickstarting” her morning with the nutritious beverage.

“Here’s my favorite at-home smoothie recipe, if you guys want to try it!” she captioned a pair of photos of herself preparing the drink. Crawford’s recipe calls for almond milk, a frozen banana, fresh spinach, fresh mint leaves, protein powder, WelleCo Super Elixir Greens, and cacao nibs. If you decide to make the star’s smoothie at home, just make sure you use a vegan protein powder.

Leave it to KKW Beauty founder to elevate the smoothie game by opting for a colorful, textured smoothie bowl instead of a simple veggie and fruit blend served in a glass. Kim’s vegan smoothie bowl, which was developed by her chef, Marina Cunningham, is made with plant milk, frozen dragonfruit, frozen bananas, frozen strawberries, agave nectar, and cinnamon syrup pears. Other toppings can include granola, cherries, and toasted coconut chips.

“This recipe is super flexible and any toppings can be added, including various fresh fruits, nuts, chia seeds, hemp seeds, and cacao nibs,” Cunningham told Poosh. Since Kim loves anything cinnamon sugar, I added cinnamon pears to this bowl.”

While Kim loves a smoothie bowl, her older sister Kourtney Kardashian is a fan of something a bit simpler but just as delicious. The Poosh founder’s beloved avocado smoothie includes avocado (duh), plant-based milk, vanilla protein powder, MCT oil, and honey or dates. Dates are the obvious choice if you want your smoothie to be plant-based, but vegan honey also works!

“Since avocados are high in fat, it’s best to eat the fruit in the morning so your body can burn the calories throughout the day,” the Poosh post states. “Kourt recently updated her recipe by swapping honey for dates. This tweak still adds a bit of sweetness and provides an additional source of fiber.”

In November 2018, the Goop founder shared what she tosses in the vegan breakfast smoothie she drinks before the start of each day. According to Us Weekly, the ingredients include a cashew milk base, “a ton of spinach,” cardamom, turmeric, salt, “and one date to give it a little sweetness.”

Paltrow also occasionally adds protein and metabolism powders to her morning smoothie, but noted that those add-ons often vary.

For The Resident star, a morning smoothie has replaced a more traditional breakfast. “Years ago, I stopped eating breakfast in the morning and I make a big green smoothie,” she shared with Us in June 2018. According to Dewan, the healthy drink includes a combination of romaine, celery and spinach to ensure she’s getting enough fiber. “It’s tons of fiber in the morning, all your nutrients,” she added. “That really transformed my body, my skin and just my energy level throughout the day.”

In a YouTube cooking tutorial in which she made the smoothie for her fans, Dewan gushed: “I swear this will work for everybody … you can really tailor it to you and what you like.”

The Friends alum shared an Instagram video of herself whipping up a smoothie in September 2021. The drink includes chocolate almond milk, cherries, a banana, stevia and ice. While this version is also made with non-vegan collagen peptides, you can always omit the collagen or use a vegan version instead.

Additionally, Aniston also shared a similar smoothie (that’s vegan from the start) made with maca powder, frozen cherries, blueberries, and more, during a January 2015 chat with InStyle. “Everyone says I should market it!” the actress said of the tasty drink.

Given that she’s a hardworking mom, business woman, and actress, it’s no surprise that The Honest Company founder relies on more than one vegan smoothie recipe to get her through a busy day.

When she’s done breaking a sweat, the star told Shape in July 2017 that she’s all about a more dessert-like Chocolate Peanut Butter Smoothie. As you may have guessed, that drink combines almond butter and chocolate coconut water, as well as a banana, vanilla protein powder, and an optional handful of granola.

“[It’s] like a Yoohoo but healthier, because it has electrolytes,” Alba explained.