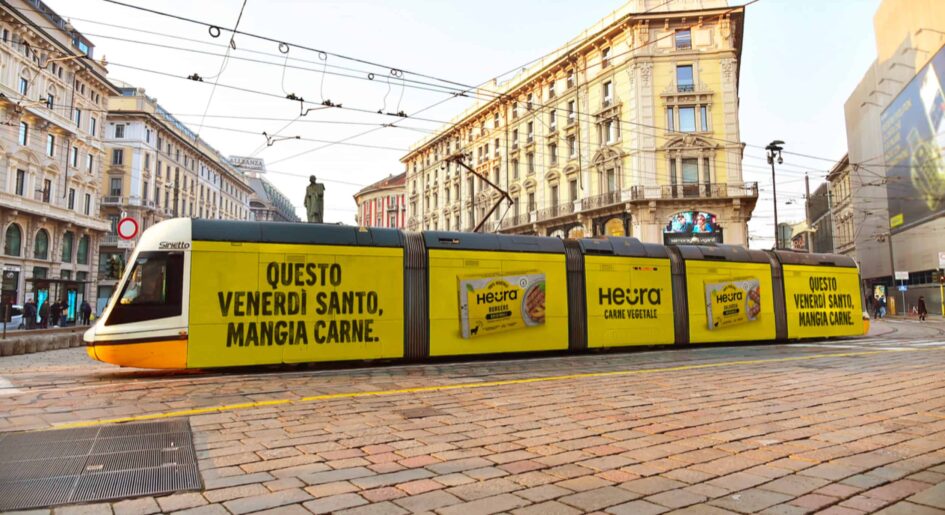 In a week where allplants and THIS in the UK, as well as Eat Just in the US, have challenged their counterparts with disruptive ad campaigns; we take a look at ten plant-based brands that have taken on the food industry over the past 12 months, causing the public to consider their food purchasing choices through the use of thought-provoking factual information or humor. And, in one case, nudity.

This week, vegan meal delivery service allplants has announced it is “taking a stance to break the industry free from ultra-processed foods with wholefood plant power”. The company has erected billboards in the UK comparing the ingredients in an allplants dish to those in a supermarket ready meal, after conducting a survey showing that 87% of Brits believe ready meals should be more nutritious.

Founder Jonathan Petrides says, “allplants has always been about championing plants, ever since we started in our North London kitchen in 2017 – and that’s never going to change. We’ve always thought it was mad that so many companies are putting chemicals into our bodies, and no one is saying anything about it. allplants is now taking the brave step to be loud about the change we expect to see from the food industry, and we’re ready to lead this change.”

Also happening this week; Eat Just is running a promotional campaign for JUST Egg outside US supermarkets, featuring the phrase “Plants don’t get the flu”. As egg shortages abound and prices soar, in part due to bird flu, the company is working to convince consumers in over 800 locations to make the switch. A full-page New York Times ad with the same message also ran on January 15.

According to Andrew Noyes, VP Head of Global Communications & Public Affairs at Eat Just, the ad has already received “incredible feedback” from the public. And reportedly, JUST Egg’s unit velocity in retail is higher than it has ever been, with the company expanding distribution exponentially.

Today a press release comes from THIS, describing the latest in its PR stunts titled “THIS™ Holds a State Funeral for Bacon”.

The UK alt-meat producer conducted a marketing stunt appearing to mourn the end of animal bacon, saying the product is now “essentially redundant”. After launching its plant-based bacon 2.0, THIS Isn’t Streaky Bacon, the company drove a coffin labelled “BACON” through the streets of London in a hearse, complete with a procession and a marching band.

Co-founder Andy Shovel says,” Of all people, we at THIS™ truly understand the widespread joy that pork bacon has brought our nation. So with that in mind, there was no option but to celebrate its historic reign over our fryups, with a public state funeral. We will take up this mantle with pride, but we’re also mindful of the heavy burden of responsibility that comes with catering for so many million butties and breakfasts. RIP bacon. And thank you.”

The list wouldn’t be complete without French vegan bacon producer La Vie, which has used marketing campaigns to successfully achieve its goals on multiple occasions. This included convincing Burger King to begin using the bacon via a combination of Instagram posts, newspaper ads, and a petition.

Next, La Vie advertised on UK billboards, despite not yet being available in the country. This resulted in listings at UK supermarket chains Sainsbury’s and Waitrose. The company then took out tongue-in-cheek billboards in Haarlem, Netherlands, after the city became the first worldwide to ban the public promotion of animal meat.

Another Oatly campaign in June illustrated children smuggling oat milk into school, calling for plant-based milk to be available alongside dairy in educational establishments.

In 2022, Daring Foods kicked off the year with full-page ads in the New York Times, calling attention to ethical issues in poultry production and urging consumers to switch to the company’s plant-based alternative. Daring says it aims to “remove animal chicken from our food system entirely”.

Speaking in interview with vegconomist, founder Ross Mackay said, “Our long-term mission is to replace and rethink chicken in the global food system. I wanted to continue creating plant chicken for chicken lovers, with a product that is a true 1:1 substitute for animal chicken without the animal.

“To date, we’ve sold 1.7M lbs of plant chicken which is the equivalent of removing 579K cars off the road, saving 1.3K football fields of land, and saving 4.4M showers worth of water. I will never lose sight of our mission and look forward to increasing our positive impact on the environment.”

For Halloween 2021, an Oumph! campaign appeared to have created a plant-based burger that replicated the taste of human meat. Passers-by in Stockholm were invited to sample the burger, which was created to demonstrate that any kind of meat can be replicated with plants.

The campaign was so successful that it took the Silver Brand Experience and Activation Lion at the Cannes Lions Festival.

In October, alt meat brand Planted (operating as Eatplanted in the UK) enlisted comedian Oliver Polak to promote its products in Berlin. Polak sat naked on a plinth in front of a Planted billboard advertising “Kebabs Without Anything”.

A play on the common request for a “kebab with everything”, the phrase aimed to communicate that Planted products are free of animal suffering, additives, and environmental issues — unlike their meat-based counterparts.

From 2021-22, Unilever-owned The Vegetarian Butcher conducted a TV campaign called “Sacrifice Nothing” in various European countries.

Showing a butcher’s shop that on closer inspection doesn’t contain any animal meat, the ad plays on the idea that plant-based eaters don’t need to sacrifice on taste — while also implying that animals don’t have to sacrifice their lives for The Vegetarian Butcher’s products.

Last but not least, Spain’s Heura — also no stranger tlarge-scalele ad campaigns — took advantage of the fact that Catholics abstain from meat on Good Friday to launch a provocative campaign in Italy.

Placing the message “Eat Meat This Good Friday” on the side of trams in Milan, the brand reminded Italians that by choosing plant-based products they wouldn’t have to miss out. Heura is also well-known for its social media campaigns.

In a world where animals are getting abused and sick, causing humans to become unwell and society to experience food shortages, we salute the brands brave enough to challenge the status quo with marketing campaigns. Clearly, they are effective, and make people think.

More of this please, vegan brands.

Presenting: The 12 Funniest Vegan Commercials and Most Memorable Ad Campaigns of 2022

From McCruelty to McPlant: PETA’s McDonald’s Campaigns Through the Years

Provocative Exhibit to Expose Violent History of Animal Experiments, Including at UF