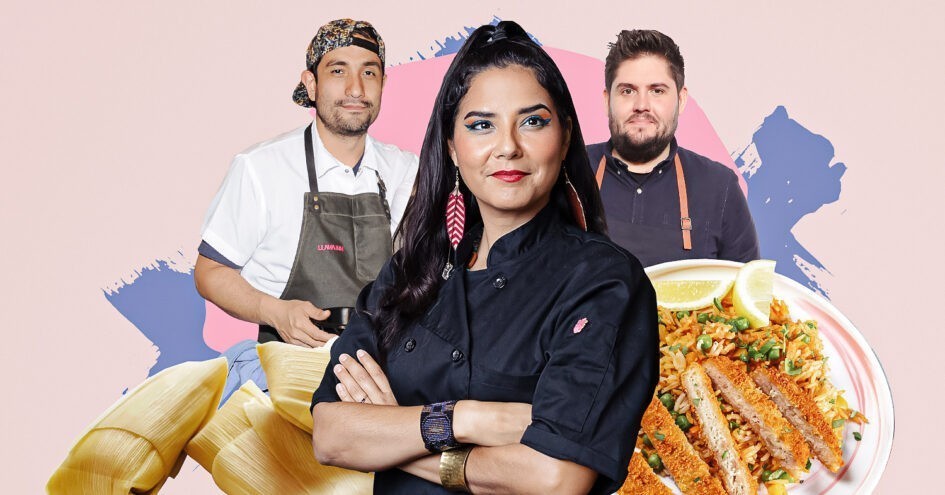 Most people associate Latinx food with meat and dairy, like chicken tamales, pork posole, barbacoa, and fish tacos. But today, so many meat-based Latinx dishes can be made with jackfruit or alternative meats—and a deft hand with flavor. In fact, many vegan Latinx chefs have found that a lot of Latin and South American dishes were actually plant-based prior to colonization by Europeans.

As the popularity of plant-based eating spreads, vegan Latinx chefs are opening eateries to serve the growing, hungry audience. Southern California is a hot spot for vegan Mexican food, especially. But the Golden State by no means has a monopoly on plant-based tacos. Latinx chefs are everywhere from Toronto to Boston to Miami, helming restaurants, pop-ups, and event catering companies, many of which feature vegan dishes.

Here are 10 Latinx chefs who are putting fresh vegetables and vegan ingredients center stage. They’re proving they can deliver on the traditional flavors of their origin countries in a meat-free format.

Jasmine Hernandez is only 27-years-old but already she’s reached a goal many chefs only dream of: restaurant owner. Hernandez opened her vegan Mexican restaurant Chicana Vegana in Fullerton, California, in summer 2020, after growing the business as a pop-up tent, according to the LA Times. She makes vegan Asada, al pastor, carnitas, and shrimp for street tacos, burritos, and loaded nachos. Her MexGogi tacos are a specialty: a slow-cooked plant protein, cucumber, cilantro, scallions, and spicy sauce.

It is clear why Ivan Castro calls himself Vegan Artisan on Instagram. His plant-based Mexican dishes are serious works of art. Castro is the chef at La Bartola, his vegan Mexican restaurant in Toronto. He grew up in Mexico City and cites his hometown and Oaxaca as inspiration. One impressive dish from his brunch menu is the pipian enmolatas: chicken enchiladas with a nutty, spicy house mole. Save room for chocolate atole on the rocks: Mexican hot chocolate on ice. Some of the best Mexican food you can eat might be in…Canada?

Food is a family affair for this married chef duo. Cecilia Flores grew up in Massachusetts. But her parents sent her to the Dominican Republic for many summers when she was young. Today, she is a public health researcher and doctoral candidate studying racial health inequalities. (How cool is this woman?) Ivannoe Rodriguez grew up in Santo Domingo. Together, they are Coco Verde Vegan Latina Kitchen, an Afro-Latina vegan catering business in Boston. Some of their most-ordered vegan Domincan dishes are asopao, a plant-based seafood stew with rice; chimichurri mushroom sliders; and ropa vieja, a plant-based beef stew.

Denise Vallejo is the force behind Alchemy Organica. She grew up in California surrounded by Mexican food that she now makes with plant-based proteins, which more closely resemble pre-colonial indigenous diets, she told Bon Appetit. Vallejo also brings her interest in astrology and alchemy to her cooking, according to Hip Latina. It’s reflected in dishes like her Zodiac Special, which centers a dish around the current zodiac sign. Check out Vallejo’s black magick tamalli, made with blue corn masa; activated charcoal; roasted jalapenos; and her cashew quesillo, a Oaxaca-style melting cheese.

Charly Garcia calls his Tulum, Mexican-inspired plant-based meals “designed for meat lovers, made for vegans.” Whether you’re eating at his shop, Charly’s Vegan Tacos, in Wynwood, Miami, or Quintana Roo, Tulum, Garcia makes his thick tortillas and his traditional toppings and sauces in-house. Yum. His nachos are a big hit on his Instagram, because obviously. But of course, tacos are the main attraction, like his carne asada tacos: grilled seitan steak roasted in garlic, with creamy avocado salsa, onion, and cilantro.

Jocelyn Ramirez, both a yogi and a talented chef, leans on her Ecuadorian and Mexican roots at Todo Verde, her plant-based restaurant in East Los Angeles. According to Bon Appetit, she began selling smoothies at farmers’ markets in Los Angeles and then broached vegan Latin American food. Ramirez grew the business into a pop-up and catering business, serving dishes like jackfruit al pastor or papas con chorizo for lunch. This spring she published a cookbook, La Vida Verde: Plant-based Cooking with Mexican Flare. It’s ideal if you’re looking to spice up your quarantine cooking with some vegan Latin-American dishes.

His taqueria was named the best tacos in Los Angeles in 2018. But native Californian Raul Medina promises his plant-based tacos will always be $3—accessible to anyone who wants them, he told OC Weekly. Head to the Taqueria La Venganza Instagram to see what he’s preparing: it’s usually a Pollo Loco pack (grilled, marinated vegan chicken); a Barbacoa Pack (smoky, fatty vegan barbacoa); or BBQ chicken.

Loreta Ruiz began exploring plant-based foods after her daughter was diagnosed with an autoimmune disease and became vegan. Her Mexican father introduced the style of eating to Ruiz as a kid. But she eschewed for a typical diet with meat and dairy. She soon realized that many Mexican foods are already plant-based, though. Now she helms La Vegana Mexicana, a vegan Mexican restaurant in Santa Ana. Look to Instagram for what’s available from La Vegana Mexicana’s pickup menu: a tamal variety pack, including a black bean and mole tamal and the El Enamorado tamal, made with pozole and cashew cheese.

Desiree Flores’ grandmother and mom raised her in the Boyle Heights neighborhood of Los Angeles. She credits her grandmother with teaching her how to cook. Flores began transitioning to a plant-based diet at 17 before heading to college to study business management and marketing, she told VoyageLA. Now she is the owner and chef behind Dear Mama LA, a pop-up restaurant and catering business serving plant-based Mexican-inspired dishes. (Perhaps you’ve seen them on episode two of the Starz show Vida?) Check out her Jalisco-style birria (meat stew) or asado tacos.

The word “delicatessen” probably brings to mind thick sandwiches stuffed with cold cuts. But not at The Plantisserie, a plant-based deli in Miami that makes it easy to grab a vegan lunch. Chef and co-owner Maria Laura Alemann is from Buenos Aires, Argentina. She came to Florida at age 18 to study hospitality, according to the Miami Herald. The Plantisserie, which opened in 2015, offers an extensive menu of fresh foods and frozen goods, including empanadas; quiches made with cashew cheese or cashew mozzarella; tempeh kabobs; and even shepard’s pie made with Beyond Meat. A pasta-less, almond ricotta lasagna is one of their top sellers and it’s no surprise why.

Mariposa, who goes by Reb Mari, is a Yanaguana-based, Native queer Tejana with a passion for ancestral healing through food, art, and activism. They founded a vegan restaurant and art space in San Antonio called La Botanica, and though the establishment was forced to close because of the COVID-19 pandemic, Mariposa still remains active in the San Antonio food and art scene.

“Back in college I started thinking about how what we eat and consume [harms us all]. The meat industry, the dairy industry, exploitation of animals, exploitation of workers … that’s really where it started for me,” they told Collective Kitchen about how they became interested in plant-based cooking. “I moved to California in 2006 and really got into working within the vegan world and eating vegan. I really do love sharing plant-based food, and teaching people about vegetables and herbs.”

Many of Mariposa’s vegan dishes have Latinx influences—check out the chef’s recipes for a Tex-Mex burger, arroz con “pollo” and more here.

Ramirez was one of 10 chefs tasked with creating a vegan menu for the Met Gala on September 13. He is the chef at the Llama Inn located in Williamsburg, Brooklyn, and he draws upon food memories from his Peruvian-American upbringing in New Jersey for the menu at his popular restaurant.

The Peruvian spot has a large, devoted following thanks to tasty dishes such as charred bean toast, quinoa with banana, avocado, bacon, and cashews, and other things Ramirez ate as a child. While there is meat and fish on the menu, several dishes are plant-based.

“I always try to make sure I’m representing a dish in a way that would make any and all Peruvians proud, because at the end of the day, our cuisine is unique, delicious, and needs to be tasted,” Ramirez told Zagat.

He briefly studied at The Art Institute of Philadelphia, and then worked at Eleven Madison Park, Nuela, and Irving Mill before opening Llama Inn in 2015. Although he didn’t always want to cook Peruvian cuisine, he later traveled to the South American country and learned from the godfathers of modern Peruvian cooking—Gastón Acurio and Virgilio Martínez.

Together with his partner Jeremiah Stone, von Hauske was half of the chef/owner duo behind adjacent New York restaurants Contra (which earned them a Michelin star) and Wildair. Von Hauske, who hails from Mexico, was also one of the 10 chefs who created a plant-based feast for the Met Gala.

The culinary pro moved to New York in 2007 to enroll at the French Culinary Institute, though visa issues later forced him to go abroad. He made the most of his time away from America and worked in the kitchens of Noma in Copenhagen, Fäviken in Sweden, and Attica in Australia.

When the pandemic hit, Von Hauske and Stone decided to merge their eateries and create a new delivery-only restaurant called Contrair on the Lower East Side. It featured dishes such as tabbouleh with pomegranate and a miso kale, and a chopped beet salad served alongside natural wine,, as well as items with Mexican influences thanks to von Hauske’s heritage. Contra and Wildair have both since reopened.