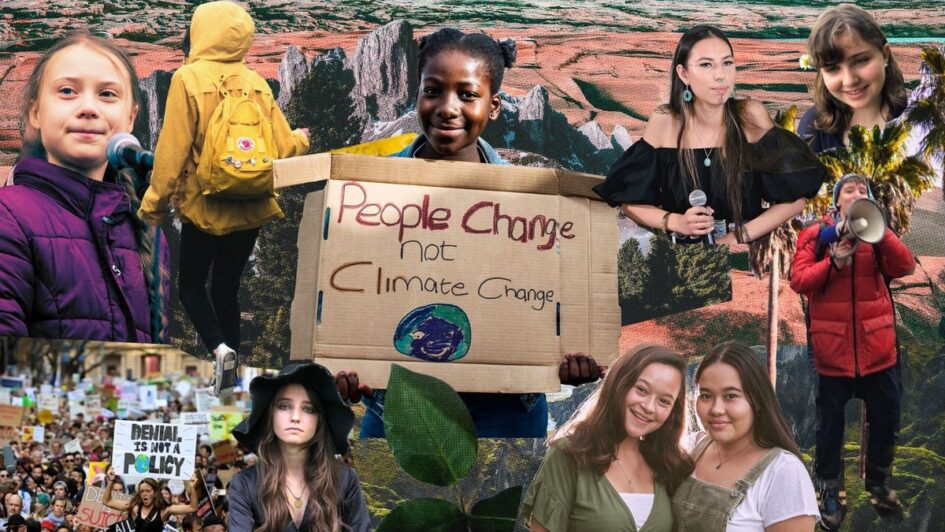 This Climate Week, we’re debuting the Vegetarian Times 20 Under 20 highlighting 20 youth climate activists who are making a splash with their Earth-saving ideals.

Gen Z has had it with older generations trashing the planet and is stepping up to make a difference. Young people around the world report experiencing acute climate anxiety as they see their world hurtling through wildfires, hurricanes, sea level rise, and mass extinctions.

The young change-makers featured here hail from all corners of the world and focus on an array of advocacy areas, from protecting endangered animals to reducing plastic pollution to rethinking how we dress and eat for the sake of the planet and its inhabitants. They are presented in no particular order and represent just a sampling of the energetic, passionate youth climate activists out there, pushing to make the world a better place.

Colombian-American organizer, author, public speaker, youth climate activist, and filmmaker Jamie Sari Margolin, 19, is the co-founder of Zero Hour. Jamie Sarai Margolin’s international youth climate justice movement led the Youth Climate Marches in Washington, D.C. and in over 25 cities around the world during the summer of 2018. She’s also the author of Youth To Power: Your Voice and How To Use It, which received the gold medal Nautilus Book Award for YA nonfiction.

Activism is in Genesis Butler‘s blood. The 14-year-old’s great uncle was civil rights leader Cesar Chavez, and she’s taken up the family mantle. Butler went vegan at 6 years old and became an advocate for animals. Now she leads Youth Climate Save, the first youth-led environmental organization that focuses on animal agriculture’s impact on climate change, and serves as a board member of animal rights lobbying org Social Compassion in Legislation. The teen is a visible figure in the movement – she one of the youngest people to ever give a TEDx talk, American Girl designed a doll inspired by her, and she was the “Amazing Animal Ally” on Disney’s Marvel Hero Project.

Chanté Davis, 17, has been a climate activist her entire life. The New Orleans native was forced to relocate to Houston, Texas after her home in the Lower Ninth Ward was demolished by Hurricane Katrina when she was just 2 years old. That formative experience showed that the climate crisis undeniable and urgent. Davis was able to attend an elementary school that focused on environmental science and later joined up with activist groups Ocean Heros and the Sunrise Movement. She speaks often about the connection between racism and environmental injustice, and is working to foster a more diverse and inclusive environmental movement with One Oysean, a new platform she’s created for BIPOC in climate activism and STEM fields.

Known as @SustainablyMaija on Instagram and TikTok, eco-influencer Maija Elizabeth, 19, focuses on finding alternatives to single-use products. She’s doing everything she can to keep plastic out of the ocean and provides her followers practical tips on how to reduce their plastic waste and properly dispose of plastic to protect marine life.

Bella Lack, 18, is dedicated to raising awareness of the sixth mass extinction. She’s the youth director of Reserva and a youth ambassador for the  Born Free Foundation and Save the Asian Elephants. Her efforts aim to preserve animal species and conserve their wild habitats through fighting illegal mining activity, deforestation, and other threats to wildlife.

Even though it seems like she’s been a fixture in the climate conversation for years, Swedish activist Greta Thunberg is just now 18. In 2018, she created the School Strike for Climate (also known as Fridays for the Future), a movement that began when Thunberg missed school and sat outside the country’s parliament with a protest sign for three weeks before the Swedish elections. Thunberg has since used her popularity to create space for other youth climate activists around the world to share their stories.

When she was 11, Yola Mgogwana realized that pollution, unusual weather patterns, and a looming water crisis in her native South Africa were signs of climate change. Now 13, she’s been urging the government and her fellow South Africans to take action on the climate crisis ever since. As an active member of Earthchild Project Eco Warriors, she joined climate strikes including the March 2019 #FridaysforFuture global action protest. The pre-teen was the keynote speaker at the UNFPA’s symposium on Sexual and Reproductive Health, Gender and Climate Change Resilience in Johannesburg in 2019.

Helena Gaulinga, 19, is an Indigenous forest protector of the Ecuadorian Amazon. Fighting the climate crisis is her legacy as she comes from a family of environmental guardians. She’s spoken at many climate conferences including the United Nations Climate Change Conference regarding the impact of big oil companies on the Amazon Biome and how floods and deforestation are destroying her homeland.

Jayden Foytlin, 18, is one of 21 youth climate activists who sued the federal government for violating their rights to a livable planet in one of the most high-profile environmental lawsuits to date. Foytlin has witnessed the devastation from the climate crisis at home in Louisiana from countless floods, storms, and the BP oil spill. She was the keynote speaker at the North American Forest and Climate Movement Convergence and has recently been campaigning against the Bayou Bridge Pipeline, which would carry oil from the Dakota Access Pipeline across the state of Louisiana.

Gaia Ratazzi, 19, uses her Instagram, @ssustainably_, to raise awareness about the environmental impact of the fashion industry. The Italian sustainable fashion advocate shares tips and tricks for how to build a more sustainable wardrobe and encourages her followers to demand transparency and accountability from fashion brands.

Youth climate activist and techie Joe Brindle, 19, found himself concerned his generation was unaware of the effects of climate change, so he launched Teach for the Future, a campaign to create more robust education on the climate crisis in schools across the United Kingdom and helped draft the Climate Emergency Education Act to implore Parliament to take action. Now he’s putting his web design skills to work, offering services to create slick sites and online fundraising campaigns for orgs he supports, and was recently featured on the Sunday Times Green Power List.

British-born 12-year-old Lilly Platt picks up trash everywhere she goes. Collecting garbage is even how she learned to count in Dutch after her family moved to the Netherlands. Platt has gathered over 100,000 pieces of trash so far – and picked up a passion for fighting the plastic pollution crisis. She’s determined to get schools to educate students about the climate crisis and has been striking outside the town hall in Zeist since 2018.

Mauritian youth climate activist Hannah Testa, 18, is an international speaker, author, and founder of Hannah4Change. Her organization helped encourage Starbucks to develop a sustainable coffee cup and for other restaurants to switch from plastic to paper straws. She was involved in the passing of a bill in Fulton County, Georgia to eliminate single-use plastics from government properties in 2019. In 2020, Testa was on the team of advocates that introduced the federal bill, The Break Free from Plastic Pollution Act.

Ashley Meeky, 19, is a Youth Ambassador Member for the Foundation for Climate Restoration. The Vanderbilt University freshman started a training program for youth to be certified in climate restoration around the world. She’s dedicated to educating youth on how to effectively inform others about the climate crisis and actions that can be done now to reverse the devastation.

Fast-rising fashion model Quannah Chasinghorse, 19, has witnessed how climate change creates devastation. From the Han Gwich’in and Oglala Lakota tribes, she grew up with stories of land stewardship and preservation through Indigenous traditions. The Arctic Refuge is a key issue of concern for the Fairbanks, Alaska-based Chasinghorse, who raises awareness in honor of her ancestors and in hopes of preserving the planet for future generations.

Sisters Isabel Wijsen, 20, and Melati Wijsen, 18, deserve a lot of credit for reducing plastic consumption in their home of Bali. They started the Bye Bye Plastic Bags campaign when they were just 10 and 12 years old. To garner attention for their cause, the young girls went on a hunger strike that resulted in the governor, I Made Mangku Pastika, signing a styrofoam-, plastic bag-, and plastic straw-ban that has been in effect since 2018. The sisters have spoken at the United Nations World Ocean Day and Melati founded a youth empowerment platform, Youthtopia.

The young fashion designer focuses on sustainability in both her professional and personal life. Maya Penn was only 8 years old when she debuted her eco-friendly fashion brand Maya’s Ideas. The collection is made with organic, vintage, and recycled materials. When the entrepreneurial Penn was just 12, she delivered a TED talk about eco-friendly business. Today she lends her green ideas to Maya’s Ideas 4 the Planet, her nonprofit where she focuses on issues such as Indigenous land reclamation.