3 Sisters Challenge Each Other: Go Plant-Based for a Month! What Happened? 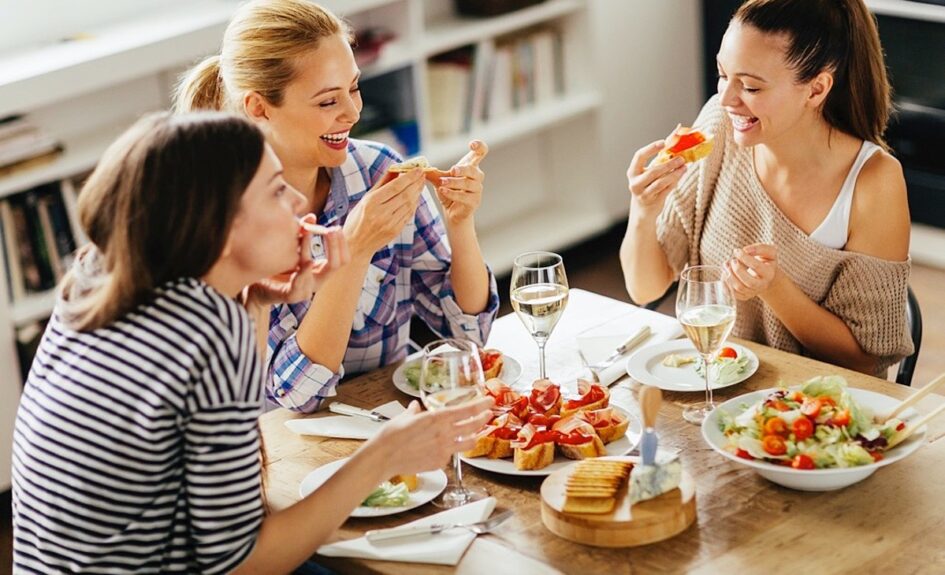 Three sisters, each very different, chose to create a plant-based challenge to go vegan or plant-based for a month. They were nervous about the idea of “missing out” on their favorite foods or that they’d crave certain things like cheese and burgers. They didn’t want to impose their plant-based lifestyle on loved ones, but they wanted to get healthier, lower their impact on the environment, and of course, they all love animals.

How’d it go? Well at least one of them got her husband to cook a mean bean burger. None of them loved using the word “vegan” because every time they did, the reaction was negative since it sounds “too restrictive.” As for their energy levels, health and overall outlook? Well, all those things were impacted positively.

Each sister has a different approach, and different dislikes: One hates tofu, the other dislikes salads and a third one doesn’t want to ever taste vegan cheese again. They each knew that going plant-based was better for their health than eating animal products, and they care deeply for the planet, and of course animals, but going into the month of plant-based eating, each had different health concerns, from high blood pressure to cholesterol to the desire to lose a few pounds. But mostly they wanted to see if they could do it. The chef-iest of the three thought it would be part of the fun to get creative in the kitchen with vegan recipes and plant-based ingredients and loved experimenting with her husband, also a good cook. Here is their story: How it went, how they felt, and whether they would try to keep going.

Meet Melinda, Darci and Susan, three sisters who, though they share the same genes, are as different as could be. They all live in separate cities and states, one in the mountains, in Vail Colorado, one in the south, in Nashville Tennessee, and the other in Orlando, Florida. Two cook while one doesn’t. One loves the foodie life, spending hours with her husband creating meals, while the other two are on the hunt for easy fast food or simple healthy options.

Yet when they all were talking about their health and wellbeing goals, they all wanted to try to go plant-based and do it together, starting on the first day of October and going until the beginning of November. The three of them tried cooking and ordering in and preparing foods that ranged from pre-packaged to homemade. Here’s what happened, and whether they will continue to be plant-based now that the month is over.

What were you most nervous about?

Susan: I love cooking but I was scared of tofu. As October 1st approached. I looked at this “sister challenge” as an opportunity to walk the walk. But, the recreational cook or baker in me was, well, not so excited. My biggest trepidation was that I would be missing things I would be craving, but by and large, I didn’t really crave anything. Until the end when I wanted a little bit of seafood.

Darci: I was about to go on vacation, so that would be a challenge. And I thought giving up cheese would be a big challenge since she had heard bad things about vegan cheese.

Melinda: I had trouble with meals in general since I am not a major cook. But I found vegan options!

What did you find when you went shopping for plant-based food?

Susan: My grocery shopping cart sure looks a lot prettier, bursting with greens, yellows, purples, reds and oranges. Breakfast and lunch were easy: Oatmeal with berries and almonds or avocado toasts and raw veggies, hummus and berries, fruit or nuts were my Go-Tos. Jeni’s Scoop Shops have D-licious diary free offerings!!

How was your energy?

Melinda: I felt better when I ate plant-based but I always do

Susan: I agree! In general, I feel better after a plant-based meal, I’ve noticed I tend to have more energy on busy days (no mid-afternoon slump) and I’m sleeping better.

Darci: My energy felt more steady. I just didn’t have the ups and downs. The first couple of days I felt totally energized. And that didn’t change. I had more energy than ever.

What were your highs and lows?

Susan: I actually had fun going plant-based. I had never spent a lot of time going down the aisle for plant-based and organic items. We found those Nashville chicken tenders from Gardein. They have a little true Nashville kick to them! They were good! I probably won’t buy regular chicken tenders again. You have to be willing to try stuff. I had never tried lentils and now I love them.

Darci: The biggest thing that surprised me was I didn’t find myself craving the meat. I don’t know whether it’s because there are so many things that substitute for it.

Melinda: I don’t love any of the vegan cheese. I did buy pepperoni. It’s lant-based and I liked that.

How did you deal with loved ones? Did they get into it:

Susan: With friends, it’s been an interesting conversation starter when dining with friends. Some were excited to hear more – while others should have just sent me a sympathy card.

Susan: My husband and I share a love of cooking and great meals. My plant-based journey often found us both in the kitchen but cooking different meals. I thought it was going to be easy for him to just grill an animal protein and throw it on top of what I was having but often that was not the case. Instead, we often shared meatless pasta.

I am not really a milk drinker but cheese is a guilty pleasure. There’s just something about sharing a cheese board and a bottle of wine with friends. I really didn’t miss or want the cured meats.  I decided the best way to do a dairy-free cheese test was on pizza. We actually enjoyed So Delicious shreds.

Advice to others starting a plant-based journey

Darci: My advice would just go into it. And don’t be afraid to go out to eat. If you explain to the waiter at a non-plant-based restaurant exactly what you want to eat you will be fine.

I went on vacation and was blown away by the restaurants. An example would be, I would look at them and say: Newly vegan! Have to have something potato-based with some veggies on the side. And I don’t like cauliflower. Can’t have it at the table. I would tell them that. And I would end up with a baked potato or sweet potato and I loved that.

Melinda: My advice is not to wait. Just to do it. You can do it. Get creative. Everything can be made plant-based or vegan. Don’t hesitate! There is no reason to wait.

Susan: It’s like training for a marathon. You are not going to go out and run all 26 miles at a time but you can train a little at a time.

Darci: I have heard that advice, about starting out gradually, but I did just the opposite. I just went all in. And that would be my advice. I did better than I thought I would. Just go all in. I thought I would miss certain foods, but I didn’t miss anything. And I really still don’t.

Susan: The other interesting phenomenon that I experienced, mostly if we were eating with friends, if I said I was on a plant-based or plant-focused diet I was met with encouragement. But when I said the word vegan I heard, “Awwwww…” like it was a downer. So I stopped saying that. But a growing number of Nashville restaurants offer separate vegetarian menus.

Darci: Vegan sounds too restrictive. But if you say plant-based everyone wants to join in.

Will you keep going on your plant-based journey?

Susan: I will continue. To some degree. Darci, you can have your cheese and put it on some celery.

Darci: I did miss cheese, but I don’t want cheese.

Susan: Will I keep going? Short answer, YES… to some degree. I wish I could say I have what it takes to go 100 percent plant-based. Moving forward, I’m definitely going to be more plant-forward when it comes to what I put on my fork or spoon. For now, perhaps I’m more a flexitarian. The animals we consume and the planet still weigh heavily on my mind. I’ll try to do my part one meal, one week, one month at a time.

Darci: I am going to keep going. Each time I think about having something with meat or cheese I don’t do it. I think about it and then decide not to!

I have been twice now to Burger King since we’ve been back. I would stop at the Burger King and I was going to allow myself a kid’s size regular burger but when I got up to the ordering voice box, I couldn’t do it. So I got an Impossible burger instead.

Another time I made myself polenta and I thought as a treat I am going to use some real parmesan cheese in the polenta – and then I thought “Why would I do that?” I have an almost perfect meal here. So I skipped it. I just haven’t wanted to give it up. I thought I would get to the end of October and blow it until my stomach hurt, but I haven’t wanted to do it yet.

Melinda: It’s been really good for me in terms of it definitely has me thinking about what I am putting in my body. Like I love dairy-free yogurt. I like the coconut milk yogurt and the oat or almond yogurt. So now I choose healthier ingredients and am checking the labels.

You don’t have to be perfect to get health benefits

Melinda: I went to see my doctor and I told her I had been vegan for 30 days and she said you should really wait to take your blood and test your cholesterol after three months. So my next blood work will be then, so I will keep it up. But I know I eat too much sugar. That’s what Susan kept saying to me when I was at her house. “That is full of sugar!” So healthwise I am going to keep going and get my results in two months.

Susan:  I think everyone should try going plant-based, if even for only a short time. It will make you think twice about what you are putting in your body and where your food comes from. I will live by Michael Pollan’s food rule: “If it came from a plant, eat it; if it was made in a plant, don’t.”

Bottom line: To go plant-based, be creative! Just don’t be too hard on yourself

The three sisters all went plant-based and did it differently. They found that no matter how you choose to do it, you can go plant-based or vegan and get healthier in just one month. Then you may even want to keep going, since you’ll be surprised at how easy and delicious it is.

So What Happened at the Plant-Based Expo in London?