5 Health Benefits of Lupin Beans. They Have More Protein Than Other Legumes 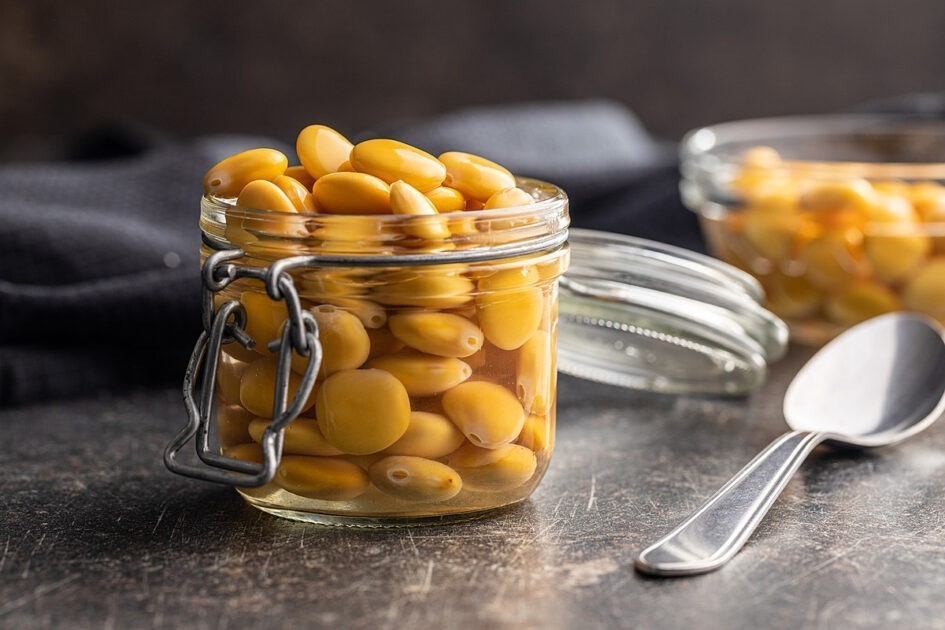 Could a yellow legume from the Mediterranean be the latest superfood to grip the US? In recent years, bean mania has focused on other protein-rich legumes such as lentils, red kidney beans, chickpeas, and more recently, mung beans. But there is a new rising star within this food family: The lupin bean – sometimes referred to as the lupini bean due to its Italian popularity.

Lupins have 26 grams of protein per cup

Lupins are protein-rich, highly nutritious, sustainable, and versatile. The only hitch is they take a long time to prepare, since they are extremely bitter and even toxic, so they require soaking for days. Leaching the alkaloids from the bean is the only way to mellow the taste and make them safe to eat. Long a staple of a traditional Mediterranean diet, the Lupin (or Lupini) is experiencing a sudden surge of popularity as widely as Egypt, South America, Australia, and of course the US. This past week, Beyoncé was connected to a lupin launch when her longtime chef announced he had created a new lupin-based product called Lupreme. So lupins are all over the place, all of a sudden. But why?

Scientists, dieticians, and food developers all recognize the major health benefits delivered by the tiny legume. Eating lupin beans has been linked to reducing illnesses such as diabetes and cardiovascular disease in studies. Along with vitamins and fiber, they provide a substantial source of complete protein, with an astonishing 26 grams of protein in one cup of cooked beans, more than any other popular legumes including chickpeas and soybeans. This versatile bean is being touted as a viable option in an economy that is increasingly interested in inexpensive sources of plant-based protein and how to feed the world’s population affordably and sustainably.

The lupin’s rise coincides with a rapidly expanding consumer preference for plant-based protein and meat alternatives. Several companies have started searching for sustainable crops that allow them to supply plant-powered protein in their products. JUST Egg, for example, uses mung beans, which are closely related to the lupin in the legume family, to make its signature vegan eggs. A market report projects that the plant-based protein market will be valued at $15.6 billion by 2026, and be valued at $10.3 billion. Cultivating new plant-based proteins will be especially important to this growth.

Consumers should keep their eyes out for the lupin bean, and consider incorporating it as a snack into their diets. Here is a list of the top five reasons why the lupin bean is a likely candidate for the next superfood, ranging from individual nutrition to environmental health.

Lupin beans can be toxic

Lupin beans are toxic if not prepared properly, because of their high alkaline content. Plus if you have a peanut allergy you are likely also allergic to lupin beans and lupin-containing foods.

Lupin poisoning is a nervous syndrome caused by alkaloids in lupins. Lupin poisoning affects people who eat the beans without correctly preparing them, by traditional leaching and soaking in water for days. Improper preparation of bitter lupins with insufficient soaking allows significant amounts of the alkaloids to remain in the beans, and poisoning symptoms may result. However, once they are washed and leached of the alkaloids, they are safe to enjoy.

When compared with other legumes, lupin beans score ahead of chickpeas, fava beans, lentils, and other popular plant sources of protein. Lupin beans have nearly twice the amount of protein as chickpeas and nearly 5 grams more protein than soybeans. With 26 grams of complete protein in one cup of cooked beans, or 13 grams of protein per 100 calories, according to Superfoodly. They also are a complete protein, meaning they contain all 9 amino acids that your body can’t make and that you need to get from foods you eat.

Beyond protein, the lupin bean is an excellent source of fiber. While most legumes boast high fiber content, the lupin bean exceeds most others, making it a powerhouse food for gut health. There are 18.9 grams of fiber in every 100 grams of bean – equal to about half a cup.

The dietary fiber in a cup of boiled lupin beans is nearly 30 percent of the adult daily value with a lower calories count than other legumes. “They’re such a fantastic, dense source of both protein and prebiotic soluble fiber with additional fibrous carbohydrates with little starch or sugars,” Registered Dietitian and Uplift Food CEO Kara Landau, RD said.

“Lupini beans lend themselves very well to so many people’s dietary requirements who need to keep blood sugar levels balanced, feed the good gut bacteria, and feel full—all this without a particularly high-calorie provision for those that are mindful of their energy intake.”

Compared to other beans, lupins are lower in calories but higher in nutrients, including thiamine, riboflavin, vitamin C, calcium, potassium, phosphorus, magnesium, iron, and zinc.  Lupin beans stand as one of the top foods with vitamin B1 – containing enough B complex vitamins to fulfill several nutritional daily values. Lupin beans also contain significant amounts of vitamin B2, B3, B5, B6, and vitamin B9.

And Lupin beans contain more vitamin C than any other legume. One cup of raw lupins contains 8.6mg of vitamin C, boosting the immune system, skin health, and more.

Lupin beans are also a great source of phosphorous, calcium, magnesium, manganese, iron, and zinc. They are relatively low in carbs and fat, with fewer calories from fat than other beans which average at 10 to 20 percent of calories in the form of fat. As a snack option, they have 80 percent fewer calories than almonds

Eating lupin beans has been linked to helping prevent chronic diseases such as type 2 diabetes, and cardiovascular disease. One study found that a lupin-rich diet correlates with lower insulin levels and lower blood pressure, due to the high fiber content.

Alongside the fiber and protein count, the lupin beans contain a substantial level of phytochemicals that have been linked to preventing coronary heart disease, certain cancers, as well as neurodegenerative diseases, and osteoporosis.

Another study found that lupin beans contain conglutin – a protein isolate that maximizes the cell glucose consumption and keeps insulin steady. This reaction is beneficial to anyone with pre-diabetes. The legumes decrease blood plasma glucose, beneficial for weight loss.

Lupin beans present several environmental benefits for farmers and for the environment. To produce lupin, it takes less water, than other crops and can help to enrich the soil and reduce greenhouse gas emissions.

“Not only are lupini beans more protein-rich than soy, but they’re also an incredibly sustainable food because they are used as a rotation crop,” LUPii founder Isabelle Steichen said.

Farmers in Australia started introducing lupin beans into the crop rotation technique that keeps the fields and agricultural systems healthy. Fifty years ago, the Australian farmers decided to use the bean and now stand as a leading supplier of lupin worldwide.

Companies and chefs worldwide have noticed the lupin bean, developing plant-based products that feature the protein-rich plant. Brands like Brami, LUPii, Carrington Farms, and Uplift Foods have started introducing the lupin bean to market towards high protein consumption. The companies aim to introduce the world to ingredients that are relatively unknown outside of the Mediterranean region. Carrington Farms developed the protein-rich Ground Lupin Bean – designed to replace quinoa or rice.

The ground-up beans have mostly a neutral taste, so they really take on whatever spices you add,” Carrington Farms CEO David Eben says, adding that he often keeps his simple, adding just lemon juice and garlic. “This makes it very versatile and allows people to use it similarly to how they use rice or quinoa.”

Uplift launched its Gut Happy Cookies after Landau felt inspired by the fiber content. The company released the new plant-based, lupin-centric cookies to promote gut health while providing a delicious treat. The brand aims to market the lupin beans to more consumers worldwide, promoting the extensive nutritional value of the legume.

Recently, professional chef Scott Findlay – the celebrity chef to Paul McCartney, Beyonce, Rihanna, and more – announced that he discovered a “breakthrough” vegan protein with Eighth Day Foods‘ Lupreme. The signature lupin-based protein alternative showcases the versatility of the legume: The plant-based meat alternative features only one ingredient that is 43 percent protein and 30 percent fiber.

“We are regularly being told that no other protein tastes as good and it’s proven that no other protein is as kind to the planet,” Inventor of Lupreme and Co-founder of Eighth Day Foods Roger Drew said. “Its unique versatility provides food producers everywhere with endless opportunities to develop their own wide range of quality products, that they develop to their own requirements.”

How to Eat Lupin

Brami is a snack food made of lupin beans that are easy to pop like candy, by a founder inspired by his years in Italy where lupini beans are frequent bar food snacks.

Lupin beans can be worked into many plant-based meals: The yellow legume is delicious when prepared alone flavored with Italian herbs or baked to top a salad or pasta dish. The bean also holds a relatively mild taste, allowing them to be easily flavored for a variety of recipes.

Carrington Farms also changed the game when it introduced its ground lupin bean product. This allows for consumers to prepare grain bowl dishes with a highly nutritious, protein-rich base – with nearly twice the amount of protein as quinoa.

The nutrient powerhouse is also extremely adaptable. Whether baked, boiled, ground, or in a protein-rich snack, consider adding lupin beans to your next meal. Keep an eye out because no matter what, this legume is a key player as the plant-based protein market expands.

How Good Is Spinach For You? A Closer Look At The Health Benefits