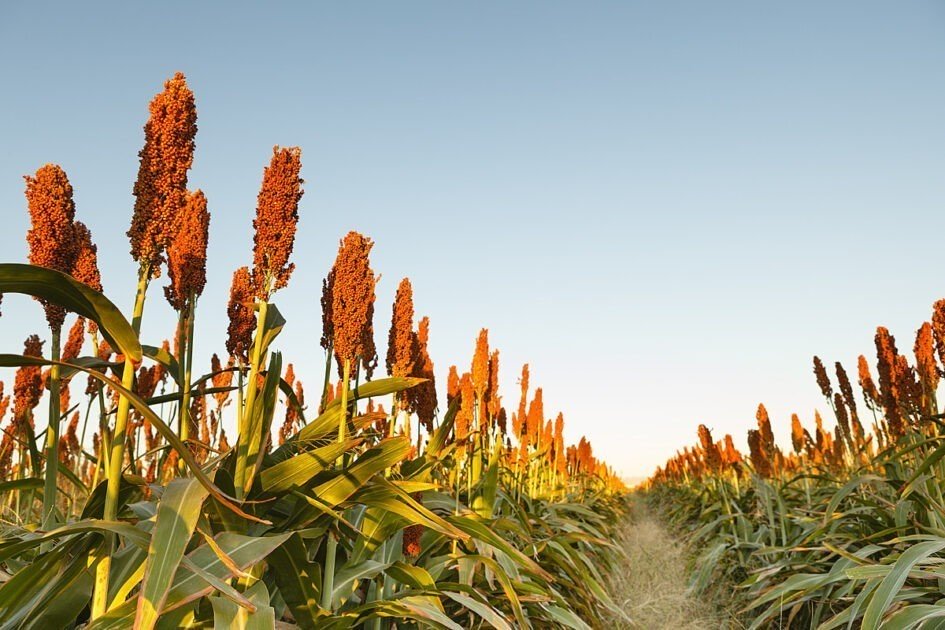 Looking for a little more protein with your grains? Look no further than sorghum, which may be the most healthy, protein-packed, fiber-filled, and overlooked grain in America. For anyone seeking to avoid wheat, get more nutrients from their meals, and power up the protein, sorghum is the answer.

With 10 grams of protein in a half a cup of sorghum, along with 6 grams of fiber and a host of healthy nutrients such as: Potassium, Niacin, Thiamin, Vitamin B6, and Magnesium, and Maganese, sorghum reads like a multivitamin of whole foods – and it definitely deserves more respect. An ancient grain believed to have originated in Africa, sorghum is a staple the world over: It’s the fifth most commonly grown crop in the world – after wheat, rice, corn, and barley – and across the globe, some 500 million people rely on sorghum as a staple of their diet. So why are Americans still not familiar with it?

Outside of the Southeast US, sorghum is relegated to animal feed, or as an ingredient in packaged or processed foods, as a syrup or alcohol to fill out the nutritional value. Yet sorghum is a versatile plant food: It’s gluten-free, easily grown, and inexpensive. The sorghum crop is known to withstand drought and extremely arid conditions as easily as it can grow in the wake of floods, and sorghum is better for the environment than most other grains. Still, it’s most commonly added to our foods across categories as “cheap filler” from cereals to beverages but is largely passed over as a staple in Western diets.

What is sorghum and Is It healthy?

Worldwide, there are more than 30 different species of sorghum grown in various regions. Other names for sorghum are great millet, Indian millet, and jowar. In many parts of the world, sorghum is a popular animal feed and more recently, an emerging biofuel.

The main application for sorghum in the US is as animal feed – or used as a syrup added to processed grain products. However, in other parts of the world, sorghum is a household grain often used to make bread, couscous, and a delicious popped snack. It can also be fermented and added to beverages. The versatile grain is a great alternative to wheat among gluten-free consumers since it is safe for anyone with a gluten allergy.

Sorghum is used in more than 350 products in the US market, across food categories. But most commonly sorghum is used in agriculture as an environmentally friendly option that is less impactful to grow than wheat. Sorghum is both cheap and healthy – packed with plant-based protein.

Sorghum is also healthier for the planet

But when looking at the future of food, it has one other benefit: Sorghum captures carbon released into the air and sends it back down its stalk and root system to replenish the soil and create a more enriching environment for crops to grow in. Unlike most crops that require rotation and allowing the soil to replenish, sorghum does this naturally, and now the Salk Institute – with a grant from the Bezos Global Fund –  is looking into ways to further enhance this function and grow super-sorghum crops that will help the world’s climate crisis by sucking carbon emissions out of the atmosphere.

Here are the top 5 health benefits of sorghum

1.  Sorghum is rich in antioxidants

Consumers worldwide look for antioxidants in their foods, beverages, or just about any way possible. One key highlight of sorghum is that it’s rich in antioxidants. Sorghum contains several phytochemicals including flavonoids, tannins, and anthocyanins. In short, sorghum delivers several active nutrients that help reduce oxidative stress in the body. Diets high in antioxidants have been connected to a lower risk of chronic diseases such as cancer, heart disease, diabetes, and more.

Specific varieties of sorghum contain even rarer nutrients that are difficult to find in nature. Sumac sorghum contains condensed tannins known as proanthocyanidins that help protect the cardiovascular system. Black sorghum contains 3-dexoanthocyanins that are the purple, blue or deeply pigmented antioxidants that give berries their color but once eaten, they help fight free radicals in the body. Studies have found that eating sorghum can help combat the development of malignant cells associated with certain cancers, such as melanoma.

2. Sorghum is one of the highest grains for protein

Among the grain family, sorghum is among the leaders when it comes to protein content. The grain contains approximately 22 grams of protein in one cup of cooked whole grain sorghum. Other grains such as rice contain 6.5 grams; quinoa contains 8.1 grams; Kamut contains 11.1 grams. When looking to boost your protein intake, sorghum is an easy substitute for other grains, especially mixed into salads, soups, and cereals.

Sorghum is a key example of how a plant-based grain can be eaten to supplement this protein value. The recommended daily protein intake ranges from 46 grams (for women) to 56 grams for men, and about 10 to 20 grams more if you are active. So one cup of sorghum contains approximately half of what women need daily and about one-third of what active men require. When looking for plant-based sources of protein, sorghum is a key source that is similar to other grain sources in its amino acid profiles.

Sorghum offers a rich source for dietary fiber, containing 12 grams per cup, or close to half the daily recommended intake for fiber (which should exceed 24 grams per day). Sorghum’s fiber content surpasses several other popular grains: Quinoa is a high fiber grain, but one cup of quinoa contains 5 grams of fiber, whereas sorghum has more than twice that. This is one reason sorghum is beneficial for digestive health.

Research has found that the active nutrients in sorghum have been linked in lab studies to preventing – or at least reducing – the growth of certain cancer cells, including gastrointestinal cancer and skin cancer, specifically melanoma, the deadliest form of skin cancer.

The phytochemicals in sorghum have been associated with a lower incidence of cancerous cell development in the lab. Still more studies have linked eating a diet high in sorghum with suppressed rates of esophageal cancer in countries where the population lives on sorghum: South Africa, India, China, Iran, and Russia. The study points out that other grains such as wheat and corn have been linked to elevated esophageal cancer levels. Yet another lab study showed that sorghum haled cell growth in breast cancer cells in animals.

Sorghum contains vitamins that are often lacking in a standard American diet, such as iron, B vitamins, and phosphorous. A single cup of sorghum provides 8.4 mg of iron, which is 47 percent of the daily recommended value for iron; 55 percent of the recommended amount of phosphorous, and large quantities of magnesium, copper, calcium, zinc, and potassium. Sorghum’s profile of micro-nutrients is a list of powerful vitamins and minerals known to help boost overall health.

Sorghum is an excellent source of niacin and thiamin, two B vitamins that help the body maximize metabolism and help get more nutrients from the food you eat. One cup of sorghum contains 30 percent of the recommended daily amount for both these B-vitamins. Along with metabolic support, niacin and thiamin help convert calories into energy easier so that anyone who eats sorghum is likely to feel energized and burn off their food rather than store it as fat. These important B vitamins also benefit skin and hair health, and neural development.

Sorghum’s value has been enhanced beyond nutritional value to human health. The Salk Institute is betting that sorghum can become a climate hero, and is funding a project to investigate sorghum’s ability to store atmospheric carbon. Sorghum essentially vacuums the carbon out of the atmosphere and delivers it back into the soil to help create more nutritious crops in the future and reduce our greenhouse gas emissions.

Salk launched its Harnessing Plant Initiative to develop a strain of sorghum that pumps up this natural ability, making its carbon retention as efficient as possible. The five-year, $6.2 million campaign plans to test sorghum strains and determine how to best utilize the crop one of the reasons sorghum is enjoying renewed attention.

“Our research community has the opportunity to use cutting-edge science and innovation to help change the course of climate change,” Nadia Shakoor, the senior research scientist at the Donald Danforth Plant Science Center, which is working with the Salk HPI, said. “Sorghum is an incredible plant that holds great promise as a carbon-sequestering crop”

How to eat more sorghum: Make it a pantry staple

For many consumers, this is their first time hearing about sorghum. Even though the grain is commonly grown, many of its applications are unknown. When cooking sorghum at home, there’s plenty of ways to prepare the ancient grain. The common crop can be cooked and boiled into a substantive base for any grain bowl or even grain salad.

The grain works perfectly as a substitute for many mixed dishes including couscous, risotto, and farro salad. To get more experimental, sorghum syrup is a perfect base for a dressing, providing a natural sweetness that can make for a delicious marinade or possible salad dressing. Finally, there is the classic popped sorghum. Similar to popcorn, the grain can be popped to produce a similarly textured snack, but full of the nutrients and health benefits that sorghum brings to the table.