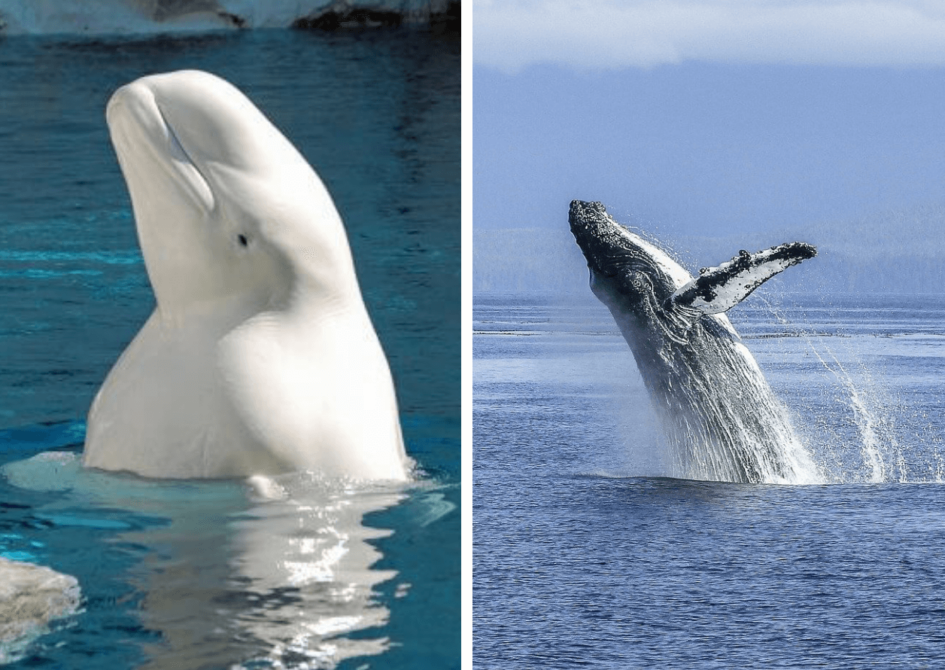 A whale’s life is not all leaps and blowholes! Whales may give us a peek into their lives when they come up for air, but all of their secrets are kept under the waves. Keep reading to dive deeper into the hidden lives of whales. 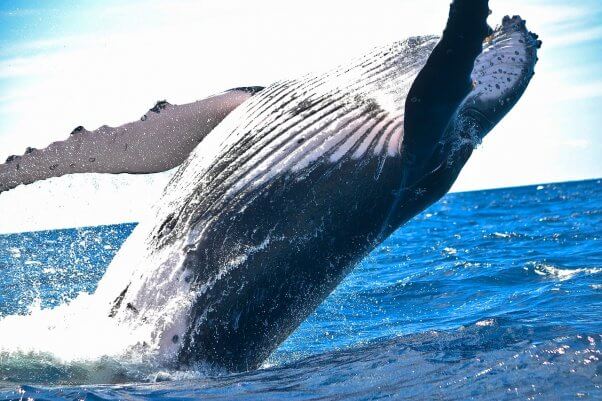 1. Not All ‘Whales’ Are Really Whales

That’s right—just as eggs labeled “cruelty-free” aren’t really humane, orcas, melon-headed whales, and pilot whales are technically not whales but dolphins. While this may seem like the con of the century, dolphins, porpoises, and whales all fit into the broader category of cetaceans. The main factor that determines whether a marine mammal is a whale or another type of cetacean is size, and the term “whale” commonly applies to larger animals. However, in the same way that all squares are rectangles, all dolphins and porpoises could be considered whales taxonomically, but whales don’t fit the criteria to be called a dolphin or porpoise.

Regardless of their classification, dolphins and whales are suffering. More than 40 orcas and 300 other dolphins and whales have died at SeaWorld parks. The abusement park doesn’t discriminate based on taxonomy, but it does create a world of hurt for the animals it imprisons. 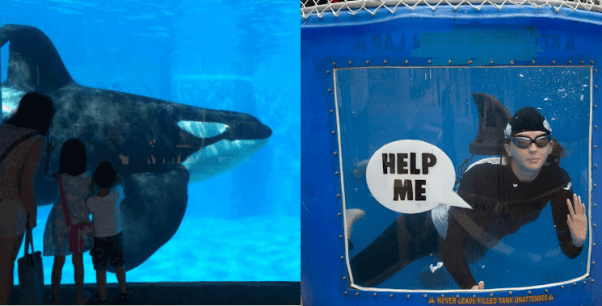 Urge SeaWorld to End Its Dolphin and Whale Breeding Programs

Just like us, whale moms will do anything to keep their babies happy and healthy. In lieu of a baby monitor, whale moms spend as much time as possible with their calves. Baleen whales even stop eating for several months after a baby has been born so that they don’t have to leave their calf alone—and maybe you thought giving up coffee sounded hard! While mom is fasting, her calf is enjoying an “all you can drink” whale milk buffet. A whale calf grows very quickly, so the milk that mom produces is anywhere from 13% to 53% fat, depending on the species—no wonder the calf of a blue whale, the largest animal ever known to exist, can gain 200 pounds a day. 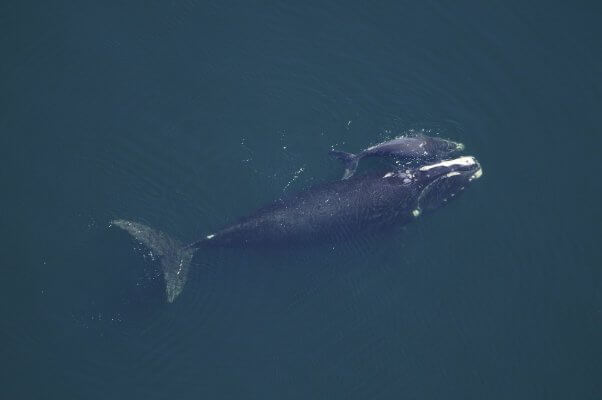 In their natural habitat, female toothed whales often play a role in the rearing of calves who aren’t their own. Some females even become appointed babysitters. However, many of the animals at SeaWorld either were born in tanks or were violently captured very young and never learned how to be a mother. This could be why Luna, a beluga whale held in a cramped tank at SeaWorld San Antonio, rejected her first baby. Luna has had at least three more calves, all born at SeaWorld. She and her newest baby, born in July, are doomed to a life of commercial exploitation and confinement, and this will also be the fate of other animals unless SeaWorld ends its sordid breeding program.

This viral sonogram of Luna, the pregnant beluga is ANOTHER reminder that @SeaWorld still sucks & continues to stoop low for visitor attraction. Exploitation is nothing new to Luna who was sexually abused & forced to give birth to her first baby.

Perhaps because whales are such devoted mothers, the death of a calf can be especially difficult for a whale to deal with. Toothed whales often have strong family bonds, so belugas, orcas, and other dolphins are the cetaceans most often seen mourning the loss of a baby. Orcas and other dolphins have been spotted carrying deceased babies for hours, days, or even weeks after their passing. Belugas have even been known to “adopt” an object as a substitute while they mourn—one mother looked after a floating buoy for several weeks after the loss of her calf.

Because of PETA’s campaigns and mounting public criticism, SeaWorld ended its infamous orca-breeding program. However, it continues to create generational suffering and grief by continuing to breed other dolphins and whales.

In the same way you can differentiate between the accent of someone from Texas or New York, some whale species develop unique calls that are used only by their pods. This is thought to be one of the reasons why orcas usually stay with their family for life—they’re the only ones who understand them! 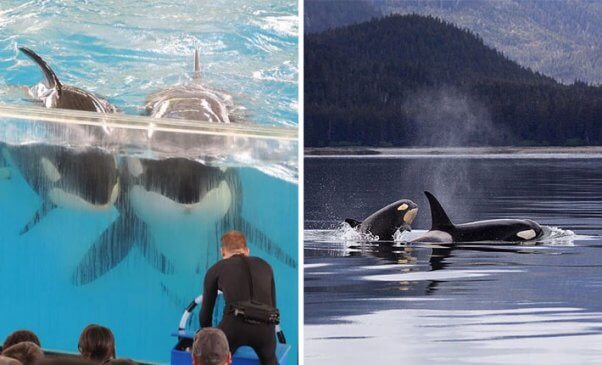 5. Whales Are Essential to Saving Our Planet

Whales also help save the planet when they poop! Whale poop is rich with iron, a nutrient that aids in the growth of phytoplankton, microscopic organisms who grow near the ocean’s surface and capture a whopping 40% of all CO2 produced in a year—roughly four times the amount of carbon that the entire Amazon rainforest captures annually. Iron-rich whale feces contain the perfect nutrients for healthy phytoplankton to grow in. Because phytoplankton need sunlight to survive, deep-diving whales provide them with iron and other key nutrients that they wouldn’t be able to obtain on their own, much the way a gardener provides plants with new soil and water. 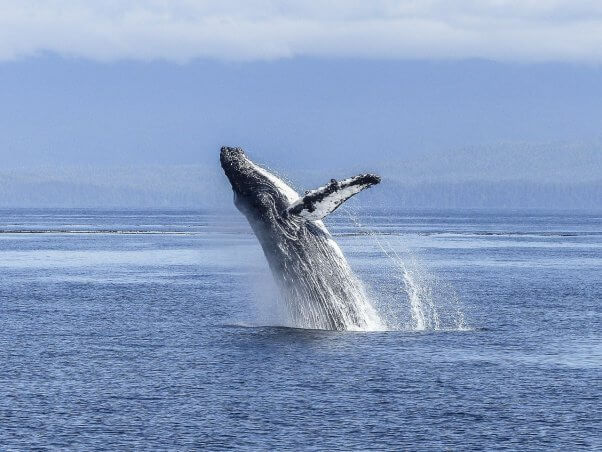 6. Whales Are Dying, But You Can Help Them

While we all know that the ocean is filling up with humans’ trash, most of us don’t actually see the damage that humans are causing on a daily basis. However, whales have to live with garbage every day. Recycling and avoiding single-use plastics are great ways to keep trash out of the ocean, but not eating fish is the best thing that you can do to help save whales. Fishing nets are one of the most common types of trash in the ocean, and they are only being used because humans eat fish. To learn more about the harm that eating fish causes, watch Seaspiracy on Netflix. 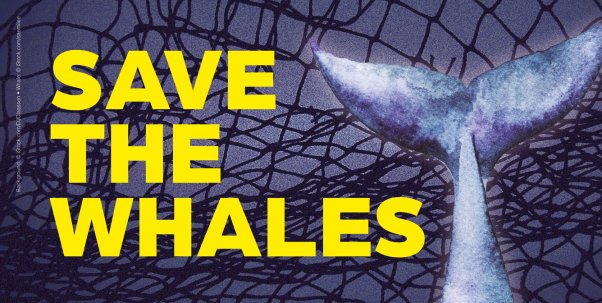 Every year, an estimated 300,000 whales, dolphins, and porpoises die after being injured in nets or lines designed to target other species. The only reason those nets are being cast is so that people can eat fish. Do your part to “Save the Whales” by keeping fish off your plate.

Help Save The Whales

Save The Whales, Don’t Eat Fish

Here’s How You Can Help ‘Save the Whales’—Don’t Eat Fish!