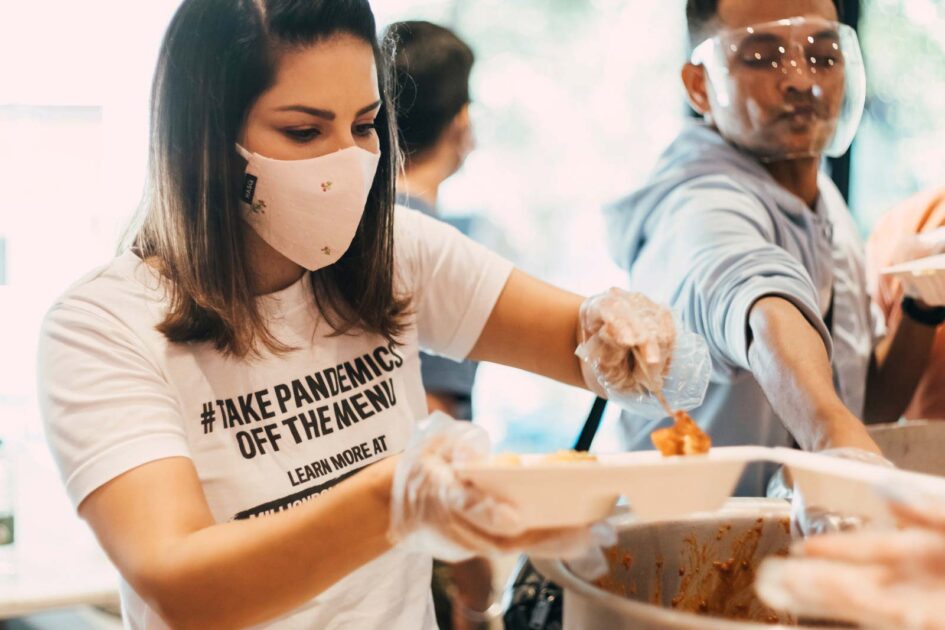 June has certainly been a busy month, with food actions taking place in Argentina, India, Spain, Uganda, the UK and US. And we’ve been joined by some truly amazing supporters. This is what we have been up to.

We were honored to have Bollywood star Sunny Leone and her husband Daniel Weber join us to reach out to 2,000 people in underserved communities in and around Bandra, Mumbai. Sunny not only distributed these meals herself but also helped with the preparing and packing of the meals at Earth Café, Bandra. The delicious biryani made with soy kheema and vegetables accompanied with a salad was well received by recipients who have been badly affected by the pandemic.

Speaking at the event, Sunny said: “We are facing a crisis, but together with compassion and solidarity, we will come out ahead.”

… and also by Sadaa and Amy Aela

We also handed out 2,500 meals of vegan biryani in Mumbai with the help of our supporters, vegan Bollywood actress and owner of Earthlings Café Sadaa, and vegan actress, model, and philanthropist Amy Aela. Sadaa says, “The food is not only nutritious, but it is also introducing the idea that plant-based nourishment is the only way forward, especially to prevent a future pandemic of this nature; since three out of four zoonotic diseases stem from animal agriculture. We have to wake up and realize the time has come to change our ways and adopt a plant-based diet to ensure a brighter tomorrow.”

Both events were incredibly successful, not only in helping to provide nutritious food but in reaching millions more people with an important message about the dangers of animal agriculture. More than 50 media outlets covered our Indian events and we reached more than 1.6 million people through Sunny’s Instagram post alone!

Our India manager Darshana Muzumdar teamed up with Animal Save Movement India to arrange these food giveaways and we thank them for always supporting us.

At the event, Alicia – who has been vegan for two decades – gave a short talk on the health benefits of adopting a plant-based lifestyle, and handed out free copies of her bestselling cookbook: The Kind Life.

Alicia Silverstone said: “A plant-based diet can protect us from chronic conditions like heart disease and diabetes – conditions that are prevalent in under-resourced communities like this one. Shifting towards a plant-based food system would also reduce our risk of future pandemics, by alleviating climate change, deforestation, and the need for factory farms. That’s why providing food aid focused on plant foods is more crucial now than ever.”

Kurtis Sundblom from the Boys & Girls Club said: “We are so blessed to have Million Dollar Vegan and Alicia Silverstone partner with us in providing healthy meals and education, and could not do it without their support and the support of many others!”

This month we donated 750 meals to the children in Lead Vegan Orphanage in Uganda. Through our partner Brian Muwanika, we provided large quantities of rice, grains, fruits and vegetables to help support the children there. They loved the food but seemed even happier to show off their new T-shirts!

Says Brian Muwanika: “Every day is a new day to battle with hunger and starvation which is killing our people. Over here, experiencing 42 days of lockdown causes a huge problem to the local people who know nothing about the world. Lead vegan orphanage is a non-profit organization that’s here to help where necessary and little by little we are doing our best.”

If you would like to support these children, you can do so via this Go Fund Me page.

Million Dollar Vegan teamed up with Refugee Community Kitchen (RCK) to provide more than 400 meals to communities across London. RCK provides nutritious and culturally appropriate food to refugees in Calais, as well as the displaced and underserved in London, and Joe Stratton, our UK manager, was delighted to roll up his sleeves and help.

Says comedic legend Frankie Boyle: “There is a humanitarian crisis in London as refugees, the homeless and other underserved communities are repeatedly let down. While much of Britain may have entirely forgotten how to be welcoming and look after people, Refugee Community Kitchen gives dignity and choice when they offer nutritious, culturally appropriate meals to these communities. So, I’m delighted to support their London outreach, which is part of Million Dollar Vegan’s wider pledge to donate one million meals across the world.”

Our Argentina manager Jacqueline Guzmán coordinated an activity day for 300 people in Buenos Aires. Not only did each person receive a meal with delicious vegan chorizo, but they learned more about the role of animal agriculture in environmental degradation, and a vegan doctor spoke about plant-based nutrition and health.

Million Dollar Vegan has been working in this neighborhood throughout the year and people there are very interested in veganism as a healthy, cheap and compassionate way of eating.

Maria, who has offered her house as a local soup kitchen for those who are severely affected by the pandemic, told us: “I am interested in what you have taught us. We didn’t know this information and it is a great learning experience because we grew up eating meat, so we don’t know what veganism is.”

Proving that protecting the planet does not mean giving up the things we love, Paula González, our Spain manager, coordinated a give-away of 350 delicious plant-based burgers and dairy-free ice cream in Madrid. Million Dollar Vegan loves to support and showcase local vegan businesses and so the burgers were made by three great local restaurants Mad Mad Vegan, Thunder Vegan and Fantastic V.

Even dogs were not left out! NeoNatural gave out 30kg of plant-based dog food with packs available to anyone who came to collect their burger with their furry friend.

Gabriel Galván of Mad Mad Vegan put it perfectly when he said: “On World Environment Day what could be better than enjoying a good vegan burger? We believe in plant-based food to keep our planet alive, and on top of that, making it delicious.”

We continue to work with three soup kitchens in Buenos Aires and this month we gave away a total of 550 meals to children. These included chipás (a cheese bun), alfajores (a typical Argentinian snack made of cookies and dulce de leche), vegan ham and cheese sandwiches, and plant-based chocolate milk.

Everyone enjoys the meals, and the feedback is always that they are delicious!

Sometimes we like to undertake a random act of kindness and just turn up with delicious food for anyone who would like it. And so, this month in London, we did just that! We teamed up with What the Pitta and handed out 150 vegan wraps along with some information about why choosing vegan is such a positive choice for people, animals and planet. Between mouthfuls of delicious food, we had some fantastic conversations, and hope we brought a little ray of sunshine to an otherwise rainy day.

Veg Out 500: Going Planetarian with PlasticFree TO