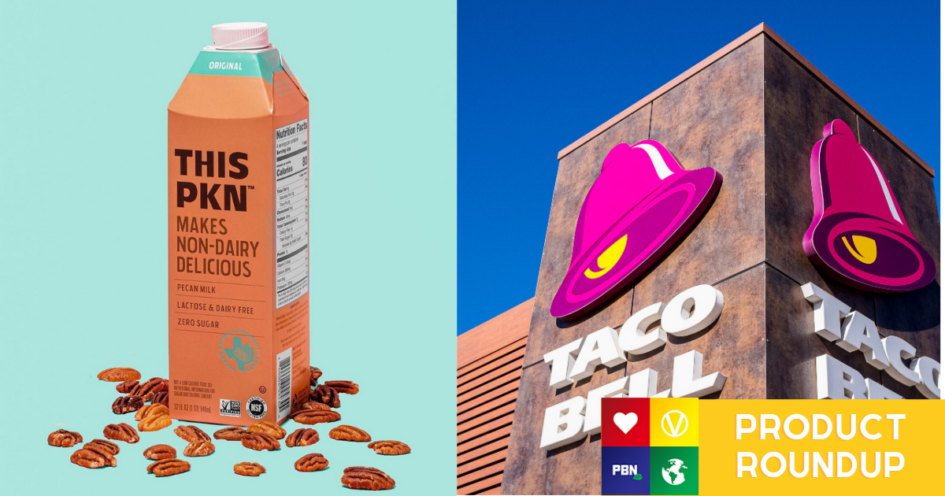 Last week, the UK was in the money with plant-based food launches. But this time around, it’s time our friends in the US took their turn. We’ve got Taco Bell’s vegan beef doing the rounds, Miyoko’s Creamery looking after caramel-lovers, and a new pecan plant-milk brand protecting farmers in Texas.

Side note: If you’re in the UK, don’t worry because there’s an Applewood Vegan treat waiting for you…

Fast-food chain Taco Bell is taking its vegan beef offerings to 95 outlets in Detroit next month.

The new chickpea and pea protein product can be swapped for beef at no extra charge across a host of popular menu items. They include the Crunchy Taco Supreme, Crunchwrap Supreme, Burrito Supreme, and Nachos BellGrande, according to VegNews.

A spokesperson told the outlet the company is ‘constantly innovating’ and testing options in the plant-based space.

Miyoko’s Butter Toffee & Chocolate will be available at Frankie & Jo’s next month.

And, it comes ‘covered in a bed of caramel’ with vegan butter toffee bits and dark chocolate chunks.

Pecan milk? THIS PKN has got you covered

THIS PKN has just launched its pecan-based plant milk in Original and Chocolate. This is in order to make ‘non-dairy delicious’, the brand claims. And, it boasts just 80 calories per serving with zero added sugar.

Founder Laura Shenkar came up with the idea to support pecan farmers in Texas, where many are grown, as she says they struggle to sell them at a ‘consistent’ price.

Here, she observed the ‘breakdown’ in pecan farming culture and felt the market needed expanding.

Upon the launch, THIS PKN said via Instagram: “With the launch of THIS PKN, people get delicious, lactose-free milk on their tables and in the process provide Texas farmers with support for their production to thrive.”

Since its debut at Ithaca Farmers Market in New York, Ithaca Hummus has released several varieties, from Smoked Chipotle to Buffalo Ranch. And now, it’s unveiled the latest in its lineup: Everyone Bagel.

The company created it to help ‘lend a hand’ to the community following the pandemic.

So far, Ithaca has pledged $20,000 in Everyone Bagel profits to national non-profit Common Threads, which provides nutrition programs to under-resourced families and communities.

Moreover, it’s a long-term commitment with five cents from each tub going towards the fund.

You can find Ithaca’s Everyone Bagel flavor at Publix, Central Market, and Sprouts, among others.

Dairy-Free Bleu Cheese Crumbles is the latest addition to vegan cheese brand Follow Your Heart’s portfolio. The ‘tangy and lusciously creamy crumbles’ are the first-of-their-kind, according to the company.

It announced the launch this week, and now the new flavor will be available at Whole Foods Market stores across the US.

Follow Your Heart says they’re perfect on salads and burgers.

Frozen aisles are getting a plant-based makeover thanks to CLO-CLO Vegan Foods. The brand has just announced the launch of three new snacks: Cauliflower Breadsticks in Original and Garlic & Olive Oil, and Sweet Potato Breadsticks With Sugar & Cinnamon.

Co-founder Wendy Hinnenkamp said the plant-based food sector is slingshotting up, and the products are a ‘fast and fun’ way to make dinners easy.

Hinnenkamp added: “Breadsticks are a staple in American restaurants. And, now it’s even easier to bring a healthy solution into the home with CLO-CLO’s veggie dipping sticks.”

Moreover, it’s now available in Morrisons, and will soon arrive in Tesco stores, retailing at £1.89.

Head of marketing at innovation at Pukka, Rachel Cranston said the bran is ‘always listening’ to Brits – who made the calls for a vegan cheese pie offering.

In a statement sent to PBN, Applewood’s senior brand manager Lisa Harrison added: ” “Just like Pukka, we’re a long-established British brand with 56 years of heritage, so it felt like a natural fit for Applewood Vegan to feature in their next Vegan recipe.

And each provides 30 percent of your recommended daily vitamin B intake, the brand says, as well as nine to ten grams of protein.

The powders dissolve in water and promises to provide all nine amino acids that your body can’t produce naturally.