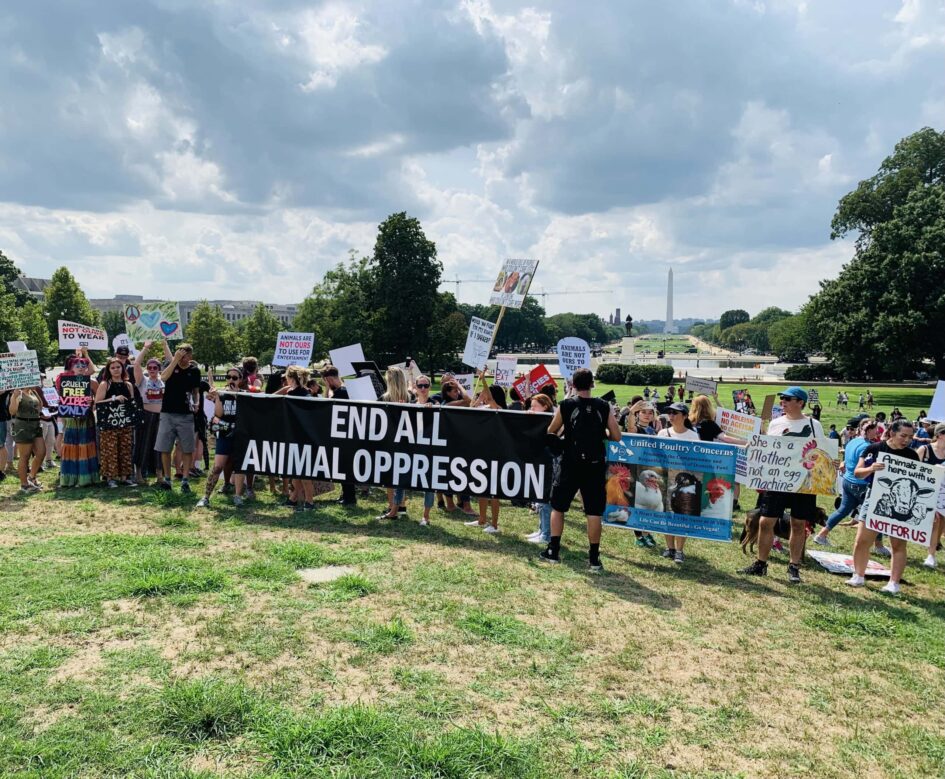 All I want to do is speak out, but it’s killing me in the meantime. Being vegan for nearly a decade, and as an Animal Rights activist first and foremost, the aforementioned comment eventually became my mantra. I thought that the slaughterhouse vigils, protests, and marches were the most effective ways I could actively change hearts and minds—and in many ways they did, and they do. What I didn’t realize was the toll that all of my inward, debilitating grief over the sights and sounds of incomprehensible suffering was taking on my overall health. As a result, I became less and less effective serving as a beacon for change. That was my fear and it won. But only temporarily. Thanks to social media, I kept seeing references and posts for the Agriculture Fairness Alliance (AFA). After resigning from a career with the federal government and still living in the Washington, DC area, I was very much intrigued. I learned that AFA is lobbying to help livestock farmers transition to plant-based, eco-friendly, lucrative crop production that is healthier, kinder, and equitable for all. Wow! Talk about a win-win on all levels. Instead of two sides traditionally in opposition (the veg community and livestock farmers), an unlikely alliance has been formed in support of creating a better planet. How could I not help with this monumentally critical effort?

I quickly signed up as a member and soon thereafter, became a volunteer after submitting a Letter to the Editor that was published in one of my local newspapers. Since then, I’ve been helping with various projects at AFA, amongst a remarkably dedicated team that inspires me daily. While this has done wonders for my hurting heart, it also allows me to continue being a much-needed voice on behalf of those that are pleading for us to not only hear them, but to ensure imperative legislative reform is happening to help them. And that gives me immense hope. Please join us! There is so much more work to do, especially taking into consideration that the USDA spent $53 billion in farm subsidies and bailouts in 2020—with at least half of that funding directed towards animal agriculture—despite USDA’s guidance that 80-100% of our diet should include plant-based foods. How does that make any sense? AFA is working to reverse this imbalance and injustice by leveling the playing field in federal farm policy. Consider becoming a member and/or volunteer. At the very least, sign up for the AFA newsletter to learn more. [AFA image_2]

Of note, AFA just secured a major lobbying victory! At the end of June, ‘report’ language that AFA spearheaded was accepted by the House Appropriations Committee (which is used to direct the USDA). This is a win for the animals, pro-plant environmentalists, vegans, and farmers interested in transitioning to sustainable, plant-based production. To learn more about this achievement, visit here. Alissa Kircher is a 2018 Main Street Vegan Academy graduate.  Thanks to a Main Street Vegan article about starting a Vegan Restaurant Week, by JL Fields and Carmella Lanni, she was inspired to co-found the first-ever Southern Maryland Vegan Restaurant Week in 2019. It was a massive success, resulting in local restaurants continually changing their menus to add animal-free dining options. She has since been invited to regularly contribute vegan content to her local county commissioners’ office webpage and events. You can follow her community page on Facebook @somdveganrestaurantweek and Instagram @somdveganrestaurantweek.