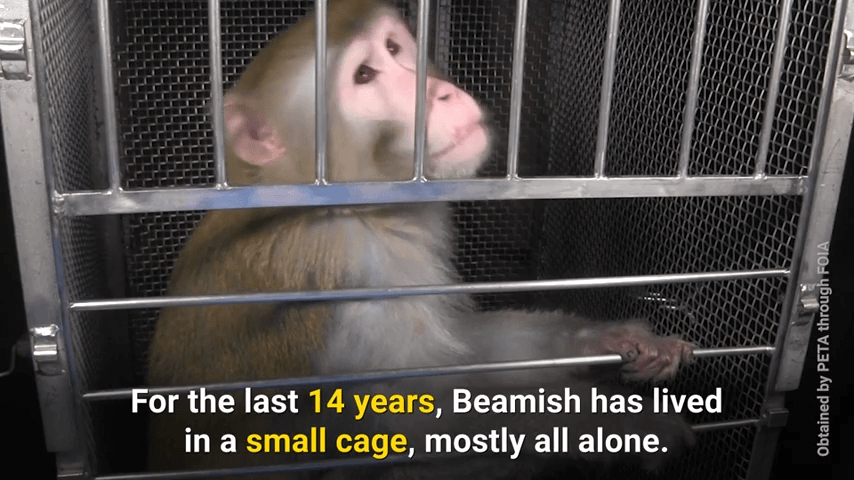 Meet Beamish, a 16-year-old monkey now imprisoned in the National Institutes of Health’s (NIH) Maryland laboratory. His medical records are pockmarked with episodes of extensive hair loss, an external indicator of extreme psychological stress. Records show that at one point, he was missing up to 73% of his body hair. There are numerous notations that he circled in his cage or rocked back and forth, also indications of a severe mental breakdown. Videos obtained by PETA show his disturbed mental state as he paces endlessly in a cramped, barren cage. Beamish sustained injuries to his fingers on multiple occasions, trauma from the cage or possibly from a stressed monkey in a neighboring cage. He has experienced rectal prolapse—in which part of the rectum bulges out of the anus, a sign of trauma—and staff notations show that he has had numerous problems with his gut. He has had multiple bouts of diarrhea, dermatitis, erythema (skin reddening), and other maladies.

He has endured multiple surgeries, invasive procedures, and blood draws. He has been strapped into an MRI machine. He has been intentionally and permanently brain-damaged, a portion of his skull cut open to accomplish it. He’s been taunted with realistic-looking fake spiders and snakes, some of any monkey’s worst fears. And along with all this, Beamish has been alone in a cage—the most unnatural state imaginable for monkeys, whose complex family structure is as crucial to their mental health as food or water is to their physical well-being.

How did he get here?

New “laboratory equipment” arrived on January 1, 2005, at Alpha Genesis, a for-profit monkey facility that sells sentient beings along with their bodily fluids, hair, skin, and other bits and pieces to laboratories across the country for experimentation.

The new inventory, an infant monkey, was later named Beamish. His future would be marked by terror, pain, and abject despair. He would be forced to endure the whim and will of his captors, allowed to live only as long as he fulfilled their objectives.

Some 16 years and untold horrors later, Beamish is currently imprisoned in the NIH laboratory of Elisabeth Murray, who cut open his skull, suctioned out part of his brain, and injected toxins into it. He’s been seen lying slumped in a cold metal cage, under unnaturally bright florescent lights, all alone.

Beamish never asked for this. He never consented to be used for experiments. He can’t even die and escape his misery unless those who control his life want him to.

In February 2020, PETA requested documents on five monkeys, including Beamish, who are being held in Murray’s laboratory. It took 18 months and a lawsuit to wrest them from NIH’s clutches. Now we know why.

In 2007, when he was 2 years old, Beamish was shipped to NIH, where he was used by two vivisectors at the National Institute of Allergy and Infectious Diseases, headed by Anthony Fauci. For these studies, he was shipped to and from a hideous infectious-disease laboratory in Rockville, Maryland, called BIOQUAL (formerly known as SEMA), where chimpanzees were driven mad in refrigerator-size cages and hundreds of monkeys of different species are now held in barren metal cages barely bigger than their bodies, until the hands of cruel experimenters remove them.

Just after his fifth birthday, in 2010, Beamish was carted off to Murray’s laboratory at NIH. He has remained there ever since.

Apart from brief stints during which he was caged with one other monkey—the longest of which was just nine months—Beamish has been caged alone. The United Nations says that for humans, any period of time in solitary confinement beyond 15 days is a form of torture. Beamish has endured it since March 2010, according to federal documents. That’s 11 years so far.

But the experiments continue.

In more than 16 years of psychological torment, serious medical problems, surgeries, and utterly devastating physical and social impoverishment for Beamish, nothing has stopped the experiments. Numerous times, staff have noted that he was lying prone in his cage or with his head in his lap, unresponsive, even to touch. He had simply checked out from the world.

On some days, Beamish is given a few peanuts or a slice of apple, which Murray absurdly and euphemistically calls “enrichment.”

We Need Accountability From NIH, NOW!

As sickening as Beamish’s story is, it’s also tragically ubiquitous. He’s one of hundreds of monkeys whose lives Murray has stolen, spending $47 million of U.S. taxpayers’ money to do it. She has caused immeasurable physical and psychological trauma to these vulnerable and sensitive beings, using them to carve out a comfortable life for herself with a plum NIH job, tenure, and, oddly enough, respect from her peers. But in nearly 40 years, she has published nothing of value to scientific inquiry or human health. What she does isn’t science—it’s violence. And it must be stopped.

Tell NIH that you won’t tolerate having your tax dollars pay for the torment of monkeys:

Do Fish Feel Pain When They Get Hooked & Is Fishing Cruel?