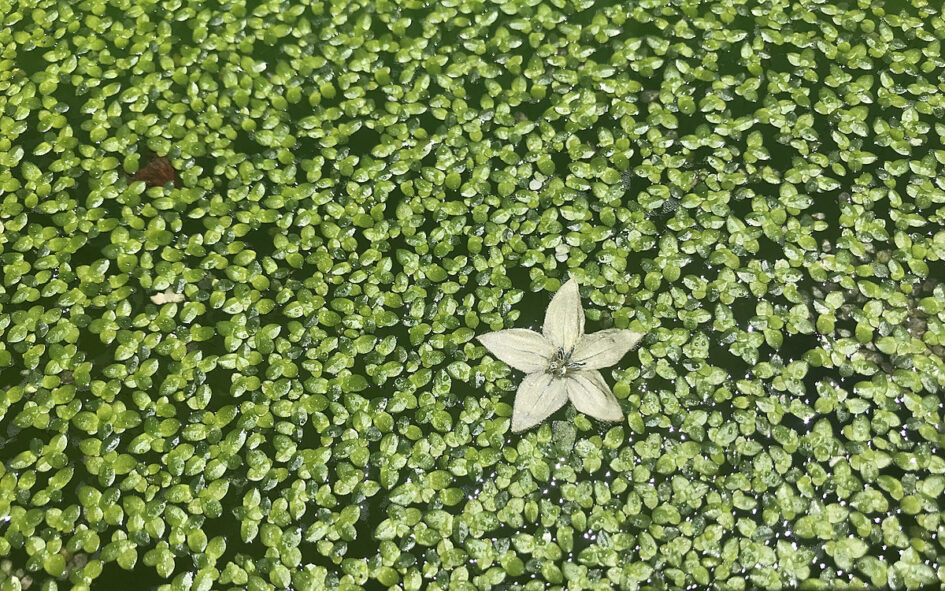 If you’re looking for ways to hack your morning shake there’s a new (or very old, depending on how you look at it) superfood that can boost your protein intake and add powerful nutrients to your diet, including the elusive B12 and iron. Whether you’re sticking to a plant-based diet or just trying to be healthier, duckweed is a tiny aquatic plant that contains some of the biggest nutrient content in any plant food and is a complete protein containing all nine essential amino acids.

Duckweed gets its name from the fact that it grows in ponds and still water, and can overproduce to an abundance, making it a sustainable form of plant-based “clean” protein and nutrients. But does it taste like pondweed? Here’s the lowdown on duckweed’s health benefits and what we think after a week of trying it ourselves.

Duckweed is the common name for the aquatic plant Wolffia globosa, a tiny (less than 1/64 of an inch) pond plant that grows on the surface of the water and is known the world over as a source of protein for both animals and humans. Duckweed is the only plant source for humans that contains complete protein (all nine essential amino acids) as well as iron, vitamin B12, plus other key nutrients.

Duckweed has been consumed for hundreds of years in Southeast Asia where it is known as “vegetable meatball” due to its high-protein content (over 45 percent of its dry matter).

Now an Israeli company, Hinoman has developed this tiny super green into a frozen product, for the consumer marketplace and has the sole rights to the Mankai strain. Along with the health benefits, Mankai duckweed has a minimal ecological footprint, produced with a hydroponic system that doubles the plant’s mass every 72 hours using minimal water and light.

Duckweed can be grown and harvested year-round making it a sustainable protein source. By contrast, protein from animal sources requires vast amounts of natural resources to produce and accounts for more greenhouse gases than all the transportation systems combined.

What are the health benefits of duckweed?

There are some serious health benefits of duckweed, including the fact that studies have confirmed that duckweed is not just a nuisance pond plant that clogs up drains, but a nutritious source of protein and other nutrients. Here’s how duckweed can benefit your health and make a valuable addition to a mostly plant-based diet.

It provides vitamin B12

Plant-based sources of vitamin B12 are rare to find, but researchers demonstrated that Mankai is one such source in a 2020 study in Nutrients. Another study found that Mankai raised blood B12 levels more than soft cheese.

However, in order for plant-based food to be deemed to provide sufficient vitamin B12, it has to demonstrate that it can correct a deficiency, and more studies are needed to prove this.

Therefore, including Mankai in your daily diet can provide some of this essential nutrient, but if you are eating a strict plant-based diet still need to take a B12 supplement.

It has the equivalent protein to eggs

Some plant foods, such as quinoa are a ‘complete protein’ containing all the amino acids our bodies need to make protein. When you look at protein it’s not just the grams that matter, but the amino profile. Add Mankai to the list of plant foods that are equal to animal protein as a complete protein.

Studies suggest that Mankai contains all nine essential amino acids —the ones we need to get from food—in a ratio equivalent to that of eggs. Additionally, another study found it has similar protein to soft cheese and green peas. One serving (three frozen cubes) of Mankai contains ten percent (five grams) of the daily value for protein.
When you add other protein-rich ingredients to your smoothie along with the Mankai cubes —nut milk, hemp hearts, or seeds, you could get a good amount of your daily protein requirements by breakfast.

We know that the Mediterranean diet is good for health but a recent study found that the addition of more plants and elimination of animal protein makes the “Green Mediterranean” diet even healthier.

Duckweed – which is high in fiber – can help regulate blood sugar, which helps balance energy levels and lowers insulin response, which in turn helps us maintain a healthy weight. A study published in Diabetes Care showed that a duckweed shake had better effects on insulin and blood sugar than a yogurt-based shake.

When obese participants consumed a duckweed shake instead of their evening meal, they felt fuller and had a lower blood sugar response by the morning than when they consumed a balanced protein and carbohydrate yogurt shake.

Duckweed packs a punch with nutrients

Duckweed has an array of beneficial nutrients that are essential to health. For example in a study on iron levels and anemia, duckweed helped to maintain iron levels in the body and helped reverse anemia in lab animals.

The Mankai brand of duckweed that is available to consumers has the following nutrition profile compared to some other common superfoods:

We know that a plant-based diet gives us an array of beneficial antioxidants to help fight free radicals and disease, and duckweed is an excellent source of these powerful plant compounds.

As part of the Green Mediterranean Diet study, researchers revealed that Mankai duckweed contains approximately 200 antioxidant compounds that may help to boost good gut bacteria. The scientists believe that the two-way relationship between the polyphenol compounds in Mankai and the gut bacteria may contribute to beneficial effects on weight and health.

I tried Mankai duckweed and here’s what happened

Trying duckweed in my morning smoothie for a week, I found that I wasn’t as hungry as usual and didn’t need to eat a meal until mid-afternoon. Meanwhile, my concentration and energy were both great.

Mankai is marketed as having a neutral taste. In my opinion, there is a grassy, earthy taste, slightly stronger than the flavor of other greens, but milder than wheatgrass. In a smoothie, I usually include some frozen spinach cubes and find this flavor milder than Mankai, which can take some getting used to, but I don’t think it’s too overpowering, and I was more accustomed to it by the end of the week.

The Bottom Line: Mankai Duckweed boosts protein, B12, and other nutrients

After trying for a week, and researching its numerous health benefits, I think it can be a healthy addition to a plant-based diet, providing some of the nutrients that are trickier to consume with plants alone. Try it for yourself and see how you get accustomed to the flavor and reap the rewards to your health.