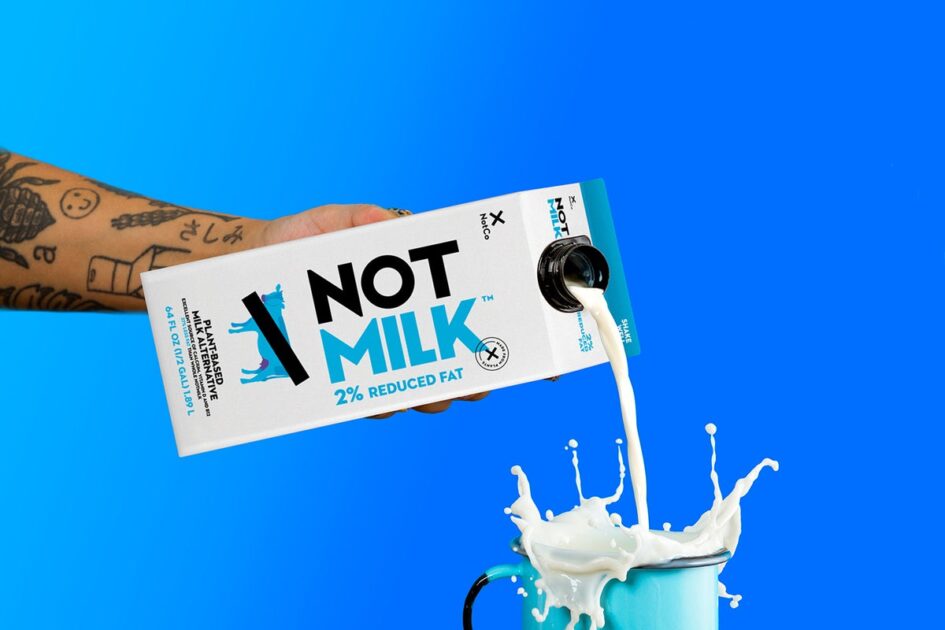 Plenty of plant-based consumers enjoy the fact that our almond or oat milk is milk-ish but clearly and identifiably not milk. Maybe it comes from too many bad surprises when the barista accidentally put cow milk in our latte, but there’s something sort of comforting in a product that’s distinctly its own thing. But NotCo – a plant-based product start-up eyeing a $1 billion valuation and named one of the “world’s most innovative companies” by Fast Company – isn’t interested in that.

NotCo is aimed at consumers who want meat and dairy products that are made from plants, but taste identical the kind that comes from cows. The company’s CEO, Matais Muchnick recently told Bloomberg that his research suggests 60 percent of Americans who currently buy plant-based milks “aren’t happy with the taste of the product.” Those are the customers he hopes to win over.

“To my knowledge, no other brand in this space has the scientific expertise to create plant-based food that looks, feels, and – uniquely – behaves just like the animal-based product it replaces,” NotCo investor Elio Leoni Scenti told Plant Based News.

The scientific expertise Scenti is referring to is, in part, the company’s signature artificial intelligence technology. According to a company statement, the algorithm, named Guiseppe by NotCo’s founders,  is able to “learn infinite combinations of plants to replicate animal products, make them more sustainable, and taste even better.” Essentially, the AI is mapping the exact molecular structure of different ingredients to assemble a recipe that most closely emulates the cow-based original.

Trusting the “infinite combinations of plants” discovered by Giuseppe, NotMilk adds concentrated pineapple juice and cabbage juice to its recipe, along with chicory fiber, coconut oil, pea protein, and other ingredients. While the English-language NotCo website states the milk is soy-free, the Brazilian version of the site it links to for nutritional information does appear to list soy protein as an ingredient. Currently, the brand is producing plant-based mayo, ice cream, burgers, and three versions of milk.

In 2020, the five-year-old company raised $85 million in funding, including a big investment from Amazon founder Jeff Bezos, though his Bezos Expeditions fund. While the Bezos association is expected to impress Wall Street, it is unclear how the connection will play with consumers. He has recently donated some $250 million to environmental charities and expressed a commitment to making the climate crisis his philanthropic focus – but the rocketeering billionaire isn’t exactly popular with the masses for a constellation of reasons.

Now, NotCo is taking a kind of moonshot of its own, dramatically scaling up U.S. sales. Last month, the brand announced plans to have products on the shelves at 8,000 Whole Foods, Sprouts, Wegmans, and other stores by the end of 2021.

“We’ve been thrilled with the response from retailers across the country in both the natural and conventional channel as they immediately understand the advantage we’re bringing to the category,” Muchnick told Plant Based News.

NotCo is poised to not only be a major player in the plant-based industry, but could also be the biggest start-up to ever launch in Chile. Bloomberg reports that, if NotCo reaches the $1 billion valuation that its executives think it deserves, it’ll be a first for any Chilean company.

RELATED: The Newest Plant-Based Milk Is an Underground Phenomenon