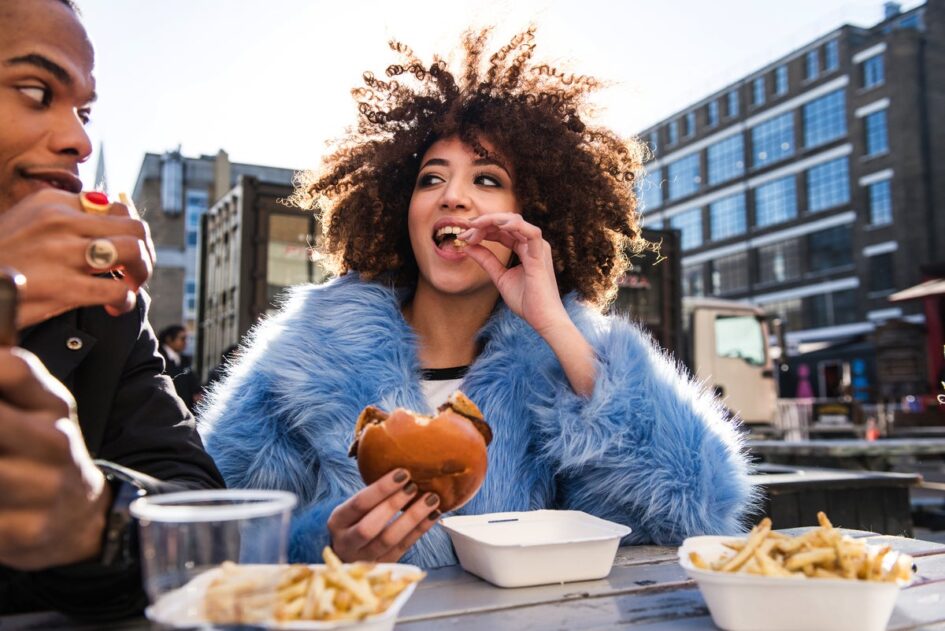 Vegetarian and vegan food has seen an explosion in the last few years. More consumers than ever are turning to plant-based products over their meat and dairy counterparts. But with so many people wanting in on the action, plant-based food is changing fast. To get the scoop on the food trends we might see on shelves and restaurant menus in 2022, Vegetarian Times talked to Scott Dicker, a market analyst at SPINS, a data company that looks at natural food. When we spoke, Dicker had just returned from Plant-Based World Expo, a New York trade show for vegan and vegetarian products, with a few ideas about where 2022 might take us. Whether these trends get you giddy with excitement or dismal with dread, we can all at least feel glad that vegetarian eating is on the rise! Here’s wishing you the best in 2022.

Vegetarian burgers and hot dogs have been around for decades. But with most of the early entrants into the market, you were never really supposed to feel like you were eating meat. Though companies made gestures at imitating the real deal, that perfectly spherical Tofurky and multicolored garden burgers were pretty much par for the course.

But now, we’re likely to see new innovations (which may or may not be improvements, depending on your point of view) in both taste and texture of plant-based meat, Dicker says. Technological advances have made it possible to imitate not only the unique flavor of meat, but the mouthfeel as well.

“As more consumers jump into this trend, that means that more brands are getting into the mix. It’s really increased the competition. As the competition increases, it’s not enough to just be plant-based anymore, because there’s so many options out there,” Dicker says. “You have to stand out now.”

Most of the people eating plant-based meat and dairy alternatives at this point are not really vegetarians or vegans, Dicker said. They’re omnivores who are choosing to go plant-based for one day or one meal, in something of a flexitarian model.

That means they’re a little more inclined to want to see veggie alternatives with high protein, to really replace the meat they would normally eat. And companies are responding by tinkering with the nutritional content, hopefully making for a healthier meal.

“When you have these other criteria and the people who are eating both plant based options as well as animal-based foods, what you’re looking to do as a brand is change that ratio, to skew it more towards the plant based,” Dicker says. “One of the big drivers would be that nutritional parity.”

The trend towards “clean” and organic eating has taken place alongside the growth of plant-based food, Dicker said, but the two movements haven’t always been connected. So-called “clean label” foods have few ingredients and simpler ones as well, so something like a Beyond Burger for example, which is pretty heavily processed, probably wouldn’t fit the bill. But as consumers – either looking out for their own health, worker justice, or environmental sustainability – turn to these organic and whole food choices, companies might look to pare down their ingredient lists and offer them more options.

This food trend feels like it has been coming forever and yet is still in its infancy. Imitating seafood might be one of the toughest nuts to crack for plant-based companies and restaurants. But Dicker says companies are making new entries into the plant-based tuna market with products like vegan tuna salad. And, he noted, the fish filets from Asian brand OmniFoods were surprisingly good when he had one at the expo.

5. Expansion into every grocery aisle

Once upon a time, you may have only found plant-based alternatives in the meat, dairy, or natural aisles of the grocery store. Now, Dicker says, companies are branching out and starting to make more alternatives for things like snacks (imagine: vegan Cheez-Its) and what the industry calls “functional beverages” – like canned oat milk lattes. More of those are likely to come, along with the potential for this food trend to expand into other sections, such as condiments, and baking ingredients.

This one’s going to depend on where you live and what sort of supermarket you shop at – what works for a national “natural” chain might not work for a regional traditional market – but with more and more consumer interest and more and more products, supermarket chains are going to have a harder time relegating plant-based products to just one aisle or area of the store, Dicker says. That could be good for plant-based companies themselves.

RELATED: What Is an ESG Rating – and Why Are Plant-Based Food Companies Getting Such Bad Ones?

The Best Plant-Based Products of 2021, According to This Industry Insider

Top Food Trends for 2022 from Sea Moss to Oyster Mushrooms