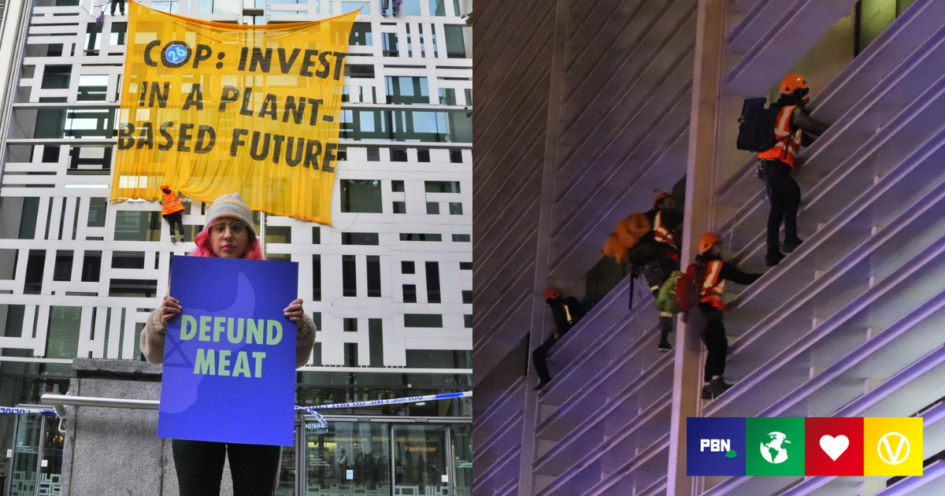 Campaigners with the animal justice group, Anima Rebellion, have scaled a government building ahead of COP26.

They call for a ‘plant-based future’ – and demand the UK government stop subsidizing meat and dairy.

Here, they unveiled a sign reading: “COP26: Invest In A Plant-Based Future.”

A police cordon, fire engines, and an ambulance are on the scene.

Animal Rebellion, which is a sister organization of Extinction Rebellion, says it intends to remain on the building until its demands are met.

The UK Prime Minister, Boris Johnson, must cut all taxpayer support for animal agriculture – and encourage other world leaders to do the same, they order.

In just five days, leaders and policymakers will gather at the UN Climate Change Conference 2021, aka COP26, to make decisions on how best to tackle the climate emergency.

This offers a mammoth opportunity for the UK, who are playing host this year, to instill monumental change.

Despite this, Animal Rebellion spokesperson Nathan McGovern accuses the government of being hypocritical.

In a statement sent to PBN, McGovern said: “The UK Government is simultaneously saying that it is a world leader in climate change whilst propping up the unsustainable and unprofitable meat and dairy industry, one that emits disproportionate amounts of greenhouse gases.

“…We need to defund meat and subsidize plant-based alternatives instead.”

The calls also follow the rollout of the National Food Strategy. This report is created to improve health and protect the environment.

And this year, it set out recommendations for meat intake to be reduced by 30 percent. ‘Our current appetite for meat is unsustainable’, it reads.

Welcomed by many, Animal Rebellion included, the report marked a positive step in highlighting the benefits of plant-based diets.

However, Britain’s meat industry remains heavily reliant on the pockets of the public. Under EU Agricultural Policy, UK farmers received around £3.5 billion in payments every year.

While this is set to change following Brexit, in 2020 alone, £3 billion was set aside to fund the farming community.

COP26 Is Fast Approaching. Here’s All You Need To Know About It.