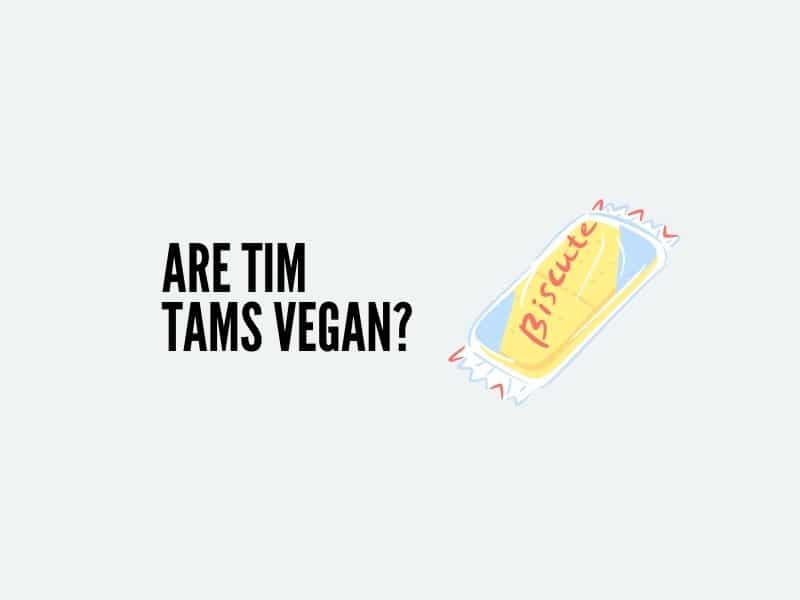 While not as popular in North America or Europe, Tim Tams are a sensation in Australia – where they are produced by Arnott’s, which is Australia’s largest producer of biscuits.

Unfortunately, Tim Tam biscuits are not suitable for vegans because they contain dairy ingredients such as milk, and insect-derived food colors like carmine.

In this article, we will cover everything you need to know about Tim Tam biscuits.

What is Tim Tam?

Tim Tam is a brand of chocolate biscuits produced by the Australian biscuit company Arnott’s, and it consists of two malted biscuits separated by a light chocolate cream filling and coated in a thin layer of textured chocolate.

At one point they even launched the Tim Tam Tia Maria and Tim Tam Kahlua varieties, which are basically named after popular alcoholic liqueurs.

This generated some controversy with the Australia Drug Foundation suggesting that selling biscuits with alcohol flavor could normalize the taste of alcohol for children.

Unfortunately, Tim Tam biscuits are not vegan as they contain animal ingredients, and depending on the flavor, they might contain more than one ingredient.

Because milk is derived from cows, vegans choose not to consume it, even if it’s organic or it comes directly from a local farm.

The reason for vegans to not consume dairy is pretty much the same as the one we use for not consuming meat – to prevent animal exploitation and suffering.

Even though the animal is still alive when it is milked, it is still an act that pretty much violates the animal’s freedom, not to mention that in most cases, there is poor treatment of the cows, including steroid use and forced impregnation.

Some vegans also avoid consuming milk for health reasons, as dairy may negatively affect digestion and cholesterol, or contain hormones or a protein that their body can’t process.

Carmine is a crimson red dye.

This specific dye is produced from scale insects such as the cochineal and is used in artificial flowers, paints, crimson ink, some cosmetics, and even medication.

Carmine is also included in some foods, such as juices, yogurt, and candy.

The reason carmine is not vegan is the same as most non-vegan ingredients because it produces suffering.

In this case, carmine is obtained from crushed cochineal bugs, which means that living beings are killed purely for the sake of food and cosmetics.

Bugs are usually regarded as disgusting, and like me, you might be someone that becomes rather uncomfortable in the presence of some insects, however, that does not mean we should harvest them to create a pigment/dye that we can use in products.

We don’t have to love bugs like we love dogs, but we have to respect their existence as living creatures, as we do with other living beings such as dogs, cats, hamsters, and others.

To produce 1kg of carmine, 100,000 cochineal bugs are crushed, so imagine how many cochineal bugs must be killed in order to provide for the food and cosmetic industry in a single year.

Therefore, yes, carmine is not a vegan ingredient.

Since Tim Tams are not suitable for vegans, we have searched for some alternatives and tried to pinpoint biscuits that could provide a similar texture and flavor profile.

Here are some options we have found:

Leda Choculence biscuits are essentially vegan Tim Tams, but they’re very popular biscuits, and you can only find them in very niche online stores such as the vegangrocerystore.co.au.

Another option, which is usually the one I prefer, is to make the vegan version of a product at home, and fortunately, the internet usually has recipes for everything.

While I have not tried this recipe, the images look absolutely delicious.

Unfortunately, Tim Tam biscuits are not vegan because they contain animal ingredients, mostly dairy, however, the Original Tim Tam flavor contains carmine, which is a food coloring derived from the cochineal bug.

If you wish to eat Tim Tam biscuits that badly, you can look at alternatives like the Leda Choculence biscuits, or you can invest some time and create vegan Tim Tams at home by following the recipe I shared above.

Unfortunately, the Original Tim Tams are not halal because they contain a tiny percentage of alcohol, and they also contain the carmine dye, which is derived from the crushed cochineal insect. However, in some countries like Indonesia, they seem to have Tim Tams that are halal safe.

No, Tim Tams are not gluten-free. Tim Tam biscuits contain wheat flour, which is an ingredient that obviously contains gluten. However, it’s possible to find homemade Tim Tam recipes that don’t use any wheat flour (or other gluten-derived ingredient), which I would definitely recommend if you badly want to eat Tim Tams.

Our #1 Recommendation For Vegans in 2021

Future Kind’s Essential Vitamins is our favorite vegan supplement. It’s not your typical multivitamin because it was specifically created for vegans by vegans. It contains the vital vitamin B12, vitamin D, and Omega-3 fatty acids (DHA & EPA). These ingredients are delivered in the right doses so that you never have to worry about a potential deficiency in the future. Read our review of the supplement to learn more about it.

Is Eel Sauce Vegan? (Here Is Everything You Need To Know)