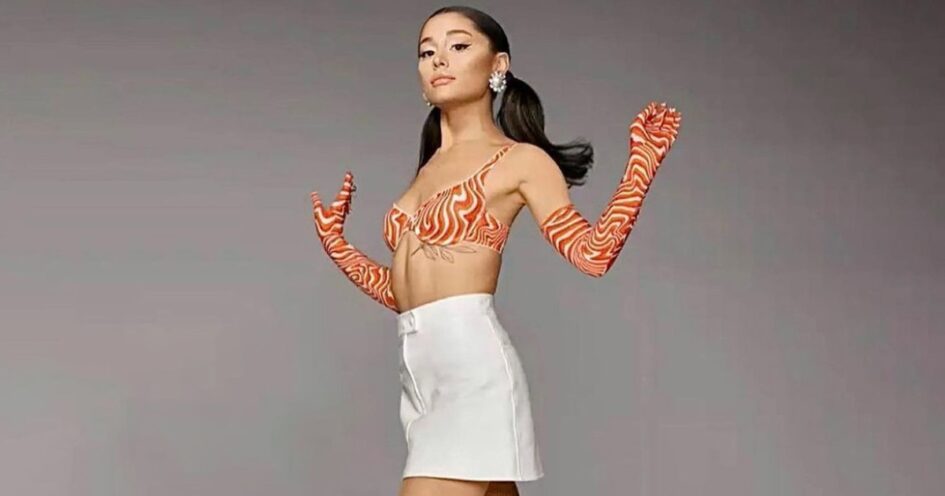 This fall, pop icon and longtime vegan Ariana Grande will release her first makeup brand r.e.m beauty. Grande has been working on the brand, which carries her signature mod ‘50s and ‘60s aesthetic, for several years in partnership incubator Forma Brands. “I began quietly working on this two years ago while on tour and I’m beyond excited to finally tell you a bit about it and for it to become yours this fall,” Grande announced on social media.

The line will be released in curated drops with the first launch focused on eyes. “They’re our main storytellers and sources of communication,” Grande told Allure in an exclusive interview. “I feel like you can emote more with your eyes than you can articulate sometimes.” Known for her cat eye look, Grande’s makeup line will feature a variety of eyeliner markers, matte liquid eye shadows, glittery shadow toppers, and mascara.

R.e.m beauty’s future launches will all reflect Grande’s personal style and are expected to include long-lasting lip glosses (which impart a tingly sensation when applied), buttery lipsticks, highlighter, and cat eye-inspired false lashes.

VegNews has reached out to inquire about the vegan and cruelty-free status of r.e.m. beauty. Grande grew up eating very few animal products and officially announced her veganism on Twitter in 2013. While Grande hit a few (non-vegan doughnut-sized) bumps on her vegan journey, the 28-year-old musical artist extends her animal-loving beliefs to her business ventures.

The new r.e.m makeup line is joining Grande’s thriving perfume business. The star began releasing fragrances in 2015, starting with the eponymously named Ari by Ariana Grande—a scent that featured notes of pear, pink grapefruit, and marshmallow. Working with Florida-based Luxe Brands, the musician has since released additional fragrances inspired by her albums, songs, and interests, including Cloud (an uplifting scent with notes of lavender blossom, juicy pear, and bergamot); Thank You Next (inspired by Grande’s 2018 song); and R.E.M. (a science-fiction inspired fragrance housed in a crystal-covered bottle).

In July, Grande released her newest scent God Is A Woman, which again draws inspiration from her 2018 hit single. The cruelty-free and vegan fragrance is made with 91-percent naturally derived ingredients and is now available at Ulta beauty stores nationwide. Upon release of the fragrance, Grande filed a trademark for “God Is A Woman,” sparking speculation of a forthcoming beauty line. When she’s not pumping out hit singles or creating signature scents and makeup lines, Grande helps save animals with Orange Twins Rescue, an animal shelter and rescue organization she opened last year in Los Angeles.

A growing number of celebrities have recently launched vegan makeup lines, including Halsey. Earlier this year, the Grammy Award-nominated artist launched vegan makeup brand about-face, which was in development for a whopping 12 years. Halsey’s vegan makeup line features 40 different products, including application tools, which range in price from $17 to $32, all crafted with vegan ingredients that are not tested on animals. On September 14, Halsey will update the line with Fractal, a futuristic collection of 21 glittery, highly pigmented and reflective products.

Singer Selena Gomez recently launched vegan beauty brand Rare Beauty at Sephora. The brand aims to highlight inclusivity, natural beauty, and foster mental health, with a range of no fuss products. Rare Beauty donates a portion of its sales to the Rare Impact Fund, which Gomez set up with the goal of raising $100 million over the next 10 years to help increase access to mental health resources.

Australian rapper Iggy Azalea just got into vegan makeup, too, with the launch of her Totally Plastic Collection at ULTA. Created in partnership with vegan cosmetics brand BH Cosmetics, is inspired by memories of Azalea’s teenage years in the 2000s with a nod to the glittery, frosted hues and high-shine lip glosses. Grande admits that the makeup industry is becoming “crowded” with brands created by fellow musicians but that fact is not a bad thing. “I wear my peers’ makeup as well, just like I listen to their music,” Grande told Allure. “I’m not going to say, ‘Oh, there’s too many female artists.’ I love and I’m [a] huge fan of my peers that do both, and I think that it’s just another way to tell stories. Because you can never have enough makeup, just like you can never have enough music.”