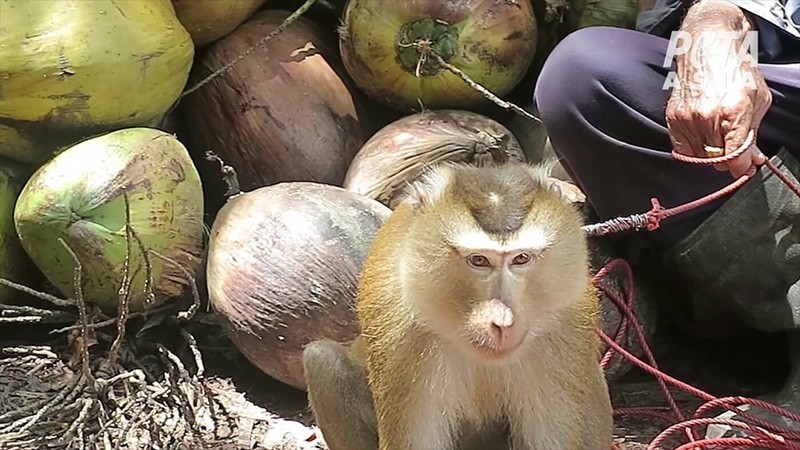 Monkeys are complex, social animals who live in large groups with their families and communicate in their own language made up of various calls and facial gestures. However, as PETA Asia investigators recently uncovered, monkeys are exploited for their labor and denied everything that’s natural and important to them. PETA Asia investigators visited coconut farms in Thailand and found monkeys with heavy metal collars fastened around their necks chained and forced to spend long hours climbing trees and picking coconuts, including for one of Thailand’s major coconut milk producers, Chaokoh.

On coconut farms, the animals are trained to work through abuse and fear and are kept chained on trash-strewn dirt patches when they’re not being forced to pick coconuts, even though humane harvest methods are readily available.

After being made aware of the ugly origins of Chaokoh coconut milk, more than 33,000 stores—including chains Wegmans, Kroger, Target, Albertsons, and Safeway—have pulled it from their shelves. But Associated Food Stores, which owns Dan’s Fresh Market, Dick’s Fresh Market, and Fresh Market, has refused.

Please send a polite e-mail to Associated Food Stores letting executives know that you won’t be buying anything from the stores until they’re no longer complicit in forced monkey labor.

Feel free to use the sample letter provided, but remember that your own words may carry more weight.

Afraid Of Being Probed? Monkeys At UW Are, Too

Afraid Of Being Probed? Monkeys At Pitt Are, Too