Auction Block or Chopping Block? For These Animals Being Sold Like Furniture, It’s One in the Same (PETA Video Exposé) 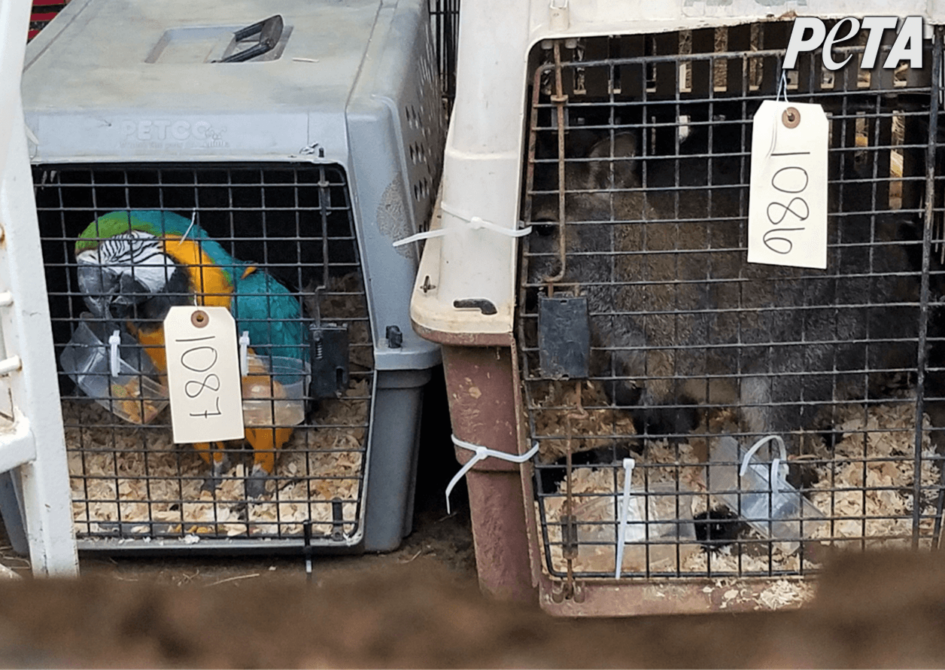 Exotic animal auctions sell animals like they’re objects—they peddle living beings to the highest bidder, who sometimes takes them for slaughter or uses them in so-called “canned hunts.” They’re also a hub for roadside zoo operators and other shady animal dealers, and they keep the exotic pet trade alive. We know that these auctions are cesspools of cruelty. But the abuse that PETA eyewitnesses observed while at the auction was shocking all the same. See for yourself:

Visibly stressed and frantic animals were kicked, whipped, shoved, and dragged to and from the frighteningly loud auction block. In response to these and other apparent Animal Welfare Act (AWA) violations, PETA is urging the U.S. Department of Agriculture (USDA) to investigate the Cleveland County Agriculture & Livestock Exchange and throw the book at the responsible parties.

We’re also asking the exchange’s owners and operators to cancel their planned March 2022 “alternative livestock” auction and to forbid any exotic animal auction from taking place at the site ever again. Click the “Take Action!” button below to join us.

At the auction house, animals’ panic was palpable. PETA investigators documented auction workers chasing frightened and stressed bison, oryxes, and emus to and from the auction block through improvised pens, where they could easily injure themselves or others.

Once forced into the auction ring, animals were sold in a loud, stressful environment. Workers jostled them and lifted many high in the air near boisterous, loud strangers. Some of the traumatized animals being roughly handled were nocturnal, and others were prey animals—surely adding to their profound terror.

The animal above is a severely stressed 6-month-old coatimundi who was sold for $1,500. He was pacing behind the scenes, and the auctioneer commented that he was “nervous” from all the noise. He bit the auction block handler and was screaming and chittering out of extreme distress when the handler forcibly restrained him. Left alone in nature, coatimundis (who are related to raccoons) live in grasslands, temperate forests, and tropical rain forests in Central and South America. It’s crucial to their well-being that they have proper nutrition and the opportunity to climb, dig, and root around. In nature, they would live in bands of four to 26 females and their offspring. Common coatimundi illnesses include canine distemper, heartworm disease, rabies, and ringworm. The latter two can be transmitted to humans.

Will the purchaser of the coatimundi above consider the sensitive animal’s many complex needs? There’s no way to know, as animal auction participants aren’t screened and purchases aren’t adequately regulated—but history and common sense tell us that this coatimundi and others auctioned off like him are doomed.

Animals Dangled or Lifted by the Tail, Dragged by the Horns

Other animals were dangled, too. Like the coatimundi, workers dangled a wallaby by the tail causing him to struggle frantically.

… and one carried a piglet by a single leg.

Handlers kicked and whipped goats and sheep, too. “Stupid bitch,” this worker called the sheep she repeatedly kicked.

Other workers dragged the animals by the horns …

… and one slammed an escaped baby goat into the side of a pen. The worker called the animal a “son of a bitch.”

Some of these animals had been hauled hundreds of miles from out-of-state dealers. Others were transported to the chaotic operation from nearby roadside attractions, including longtime PETA target Zootastic Park, a wretched North Carolina roadside zoo that has repeatedly shown that it either can’t or won’t provide the animals in its custody with even basic care.

Upon arrival at Shelby, workers offloaded a wallaby, two servals, and three juvenile African crested cranes. The 16-month-old wallaby, who struggled while handlers suspended him by the tail, risking injury, was sold for $3,800. The servals were sold for $4,000 each. During the auction, Zootastic owner and operator Scottie Brown was shouting to the auctioneer that these servals were “imported” and “new blood.” The auctioneer added that the animals were “breeders.” 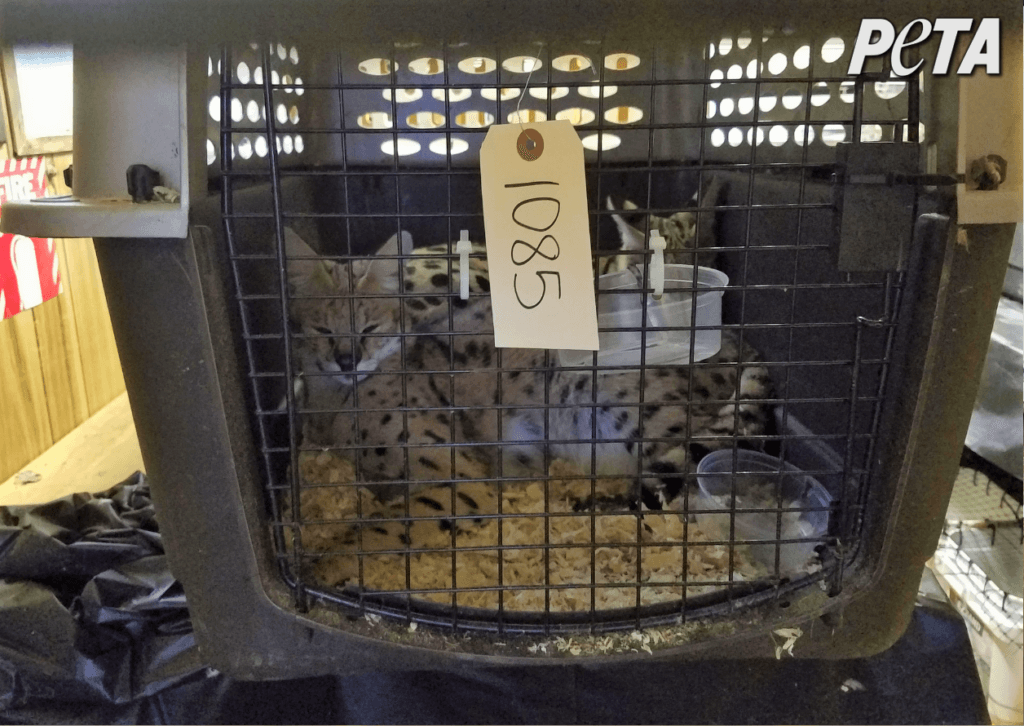 One of the cranes, who were being held by their wings, which is inappropriate and potentially painful and damaging, was visibly panicked while being unloaded.

Exploiting animals is a kind of filth that can’t be scrubbed off.

Operators of the notorious Hollywild Animal Park apparently sold this tortoise at the Shelby auction, too. 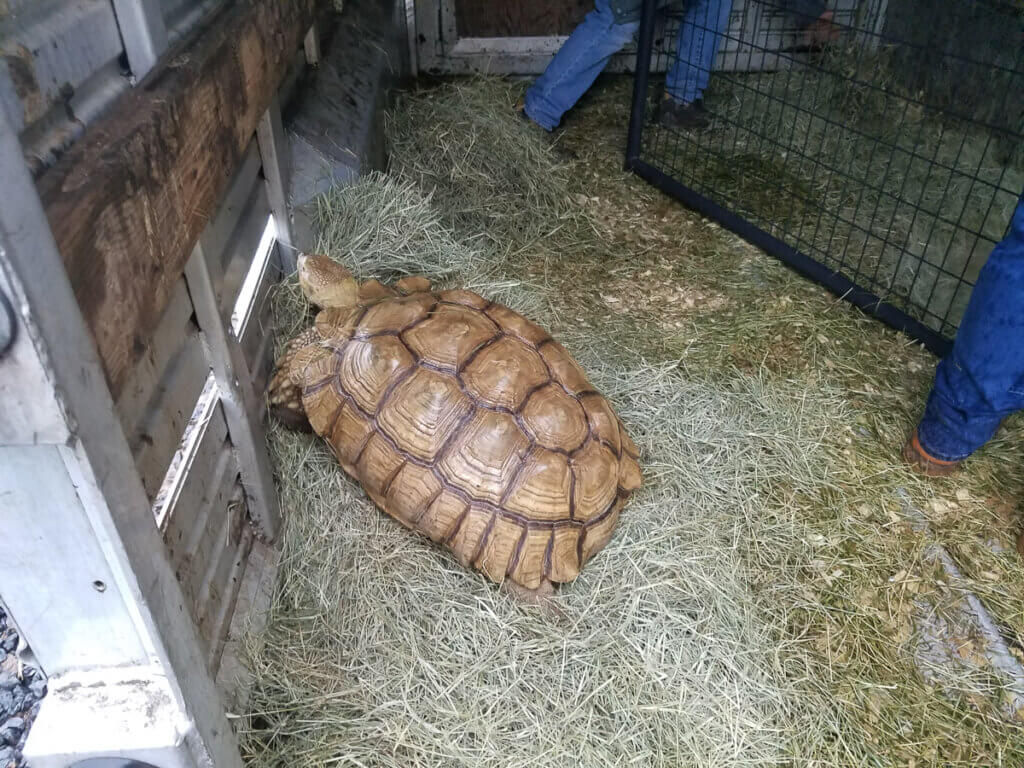 Often, It’s a Premium Price for the Ultimate Price

Where do these animals go, after they’re purchased at auction? When they’re not put on display at roadside zoos or exploited in the exotic pet trade, animals bought at auctions are often hauled to a slaughterhouse or even used in canned hunts (aka hunts that take place on private lands that are set up as for-profit hunting reserves or game ranches, where hunters can pay to kill native and exotic species). Oryxes are commonly killed in the canned hunting industry in the U.S. One who was auctioned at Shelby broke through makeshift corrals in a bid to escape his confinement and nearly impaled multiple workers in the process.

Even though oryxes are virtually extinct in nature and even though they’re protected under the Endangered Species Act, canned hunting ranches are able to use loopholes to acquire permits to kill them, and exotic animal auctions like Shelby help to sign these animals’ death warrants.

When they weren’t being paraded around the chaotic auction ring, animals were crammed into barren crates and crude makeshift cages. 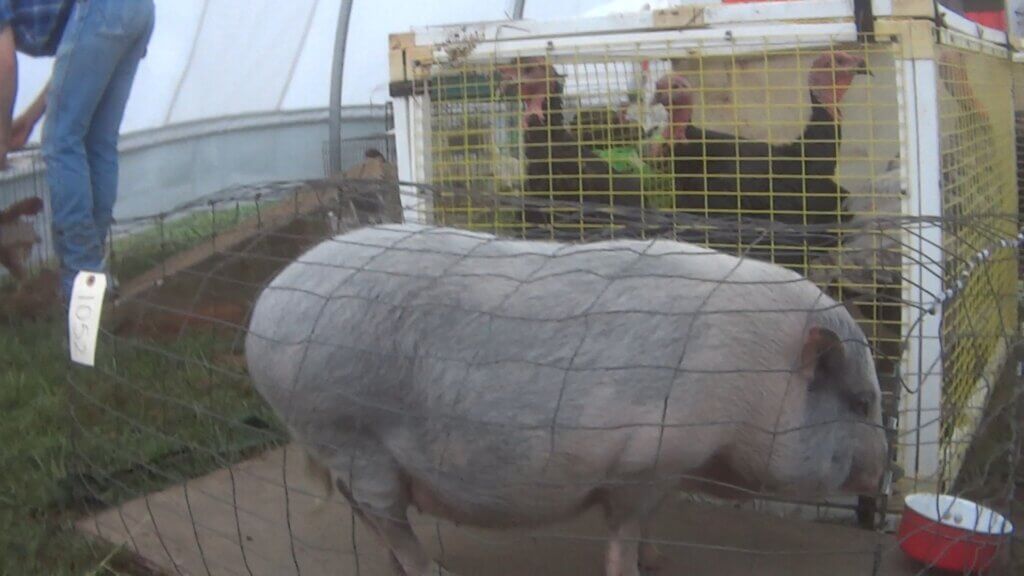 Many were so crowded together they couldn’t move around freely or even stand all the way up, like the pig above or the guinea pigs, pigeons, and turkeys below.

This confinement can cause constant stress, lead to excessive aggression and traumatic injuries, and create a breeding ground for infectious disease, thus posing a threat to human health, too.

Furniture sold at an antiques auction would be treated and handled with more care and consideration than these animals were given. In our letter to the USDA, we’re calling out the atrocities mentioned above and more (e.g., the condition of these cows, who are severely underweight, indicating illness, inadequate veterinary care, and/or malnutrition …

… or this zonkey apparently not receiving any veterinary evaluation after he frantically struggled for more than a minute with his leg caught in the gate of a makeshift corral while workers tried to free him).

We’re asking the USDA to conduct its own investigation and to hold the consigning exhibitors, dealers, the Cleveland County Agriculture & Livestock Exchange, and any other responsible parties accountable to the fullest extent of the law.

Please urge the operators of the Cleveland County Agriculture & Livestock Exchange to cancel the planned Shelby Alternative Livestock Auction in March 2022 and to forbid any exotic animal auction from taking place at the site ever again.

Bidders, Get Ready! 7 Items You Can Win in PETA’s Online Auction

IKEA Wants to Buy Back Your Used Furniture

This New Super Cheesy Vegan Brie Sold Out in 24 Hours: Here’s Where to Get It