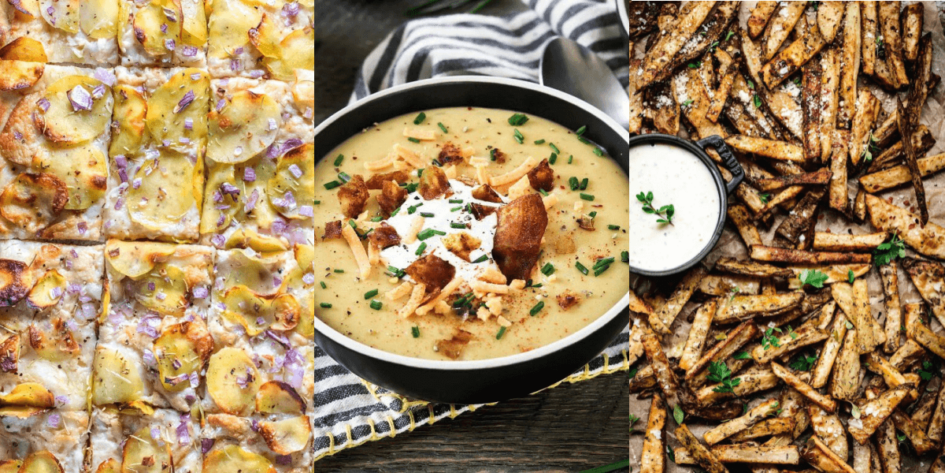 Have a bag full of potatoes but not sure what to make? Don’t worry—there are endless ways to cook this versatile spud. These vegan potato recipes range from quick and simple side dishes to meals worthy of a five-star restaurant, but all of them are free from cheese, milk, eggs, and any other ingredients that harm animals.

Tacos de papa is a dish usually made with cow’s milk cheese, but this cow-friendly version uses vegan butter and almond-milk ricotta.

Potatoes, onions, and peppers combine for a classic breakfast hash. This version is made even heartier with the addition of black beans, kale, and optional Beyond Meat Beyond Breakfast Sausage.

This 30-minute potato curry is a healthy weeknight dish that’s packed with flavor from a variety of Indian spices.

Customize this classic side dish by adding your favorite seasonings or herbs. A whole head of garlic goes into these mashed potatoes. Use your favorite vegan butter and unsweetened vegan milk to make them rich and creamy. Better than fast food, these French fries are easy to make at home. Bake them to a perfect crisp, and serve an herby, egg-free vegan aioli alongside them.

These fluffy pillows of potato goodness can be tossed in your favorite pasta sauce or served simply with vegan butter, herbs, and peas.

This hearty and healthy side can be served with your favorite vegan sauce or guacamole.

To create perfectly crispy diner-style hash browns, steam the potatoes whole before you shred them.

Hanukkah isn’t the only time of year when you can enjoy these fluffy latkes. Serve them with vegan sour cream and applesauce.

Eggless vegan mayo makes this potato salad recipe rich and creamy. Serve it alongside barbecue tofu and corn on the cob for a classic cookout dinner.

Thinly sliced potatoes, red onion, and rosemary make for a delightful pizza combination, especially when piled on top of a thick, chewy crust.

These loaded baked potatoes are stuffed with vegan cheese, mushrooms, spinach, and tomatoes.

Whether you’re making a classic recipe or trying something new, vegan cooking is sure to satisfy your taste buds. For more inspiration and guidance for going vegan, take our 3-Week Vegan Challenge: