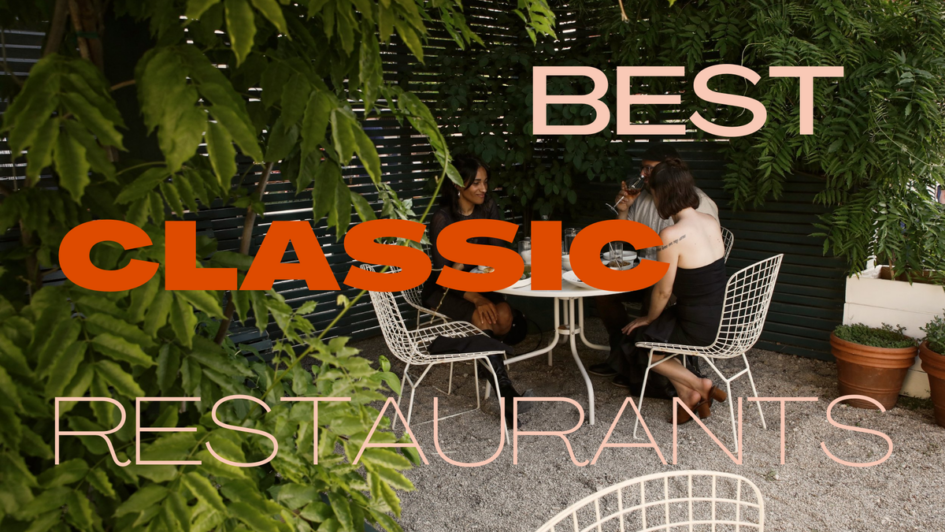 Early on in the process of creating our list of best new restaurants in the U.S., one thing became clear. We also wanted to create a space to shout out some of the best vegetarian restaurants that have stood the test of time – from a few years to whole decades – and that might not be “new” any more, but are still places we return to often or would seek out when visiting a city. We’re calling these our “classics.” This isn’t an exhaustive list of every great plant-based restaurant in the country, more a handful of our greatest hits.

Nicole Marquis infuses the food and atmosphere at Bar Bombón with sunshine. We would happily eat tostones and Impossible chorizo tacos and sip on a pisco sour here any time.  In April of 2021, Marquis announced that every worker, front and back of house, at any restaurant in her group – including the fast casual chain HipCityVeg – would be guaranteed a minimum hourly wage of $15, significantly higher than Philadelphia’s local minimum.

The aesthetics at Comune nail that perfect chic-but-casual thing that only the innately stylish can attain – and that vibe extends to the food. Most of the menu is vegan or adaptable to vegans, and a number of options are gluten-free as well. Get an order of the warm, smoked, berbere-spiced cashews to nibble with your glass of orange from the list of natural wines, before moving on to bowl of chilled noodles or plate of cherry tomatoes with silken tofu.

What can we say about chef, restaurateur, and cookbook author Tal Ronnen and his flagship restaurant, Crossroads, that hasn’t been written a hundred times? Crossroads is a favorite of Billie Eilish, Katie Perry, and Oprah – spanning the generations – and can legitimately be named among the restaurants that have changed what people expect a plant-based restaurant to be. Amid the pandemic, Crossroads was one of the first restaurants to get involved with Support + Feed, a community effort to deliver nourishing meals to the unhoused and other people in need.

In 2021, there was a lot of media attention around a particular Manhattan fine dining restaurant flipping to a (mostly) veg tasting menu, with talk of it being a big statement about sustainability. Not far away, Amanda Cohen’s Dirt Candy has been around since 2008, picking up accolades from The New York Times, Michelin – and pretty much everyone who has enjoyed the restaurant’s five-course tasting menu. When you want artful, inventive seasonal cuisine, there’s nowhere better.

For lots of folks, their first exposure to animal rights and veganism may come from punk rock music, so it feels natural that one of the country’s best vegan restaurants would be pretty rock and roll (metal, if we’re being precise) itself. Kindred has everything we want in a go-to spot. Fun decor, phenomenal cocktails, and indulgent brunch and all-day food we want more often than we probably should. The team plans to open a second concept, dubbed Mothership, by the end of the year.

Cookbook author, vegan cultural icon (and even occasional past contributor to Vegetarian Times) Isa Chandra Moskowitz opened the Omaha Modern Love in 2014, and followed up with an expansion to Brooklyn just two years later. The menu is comforting and approachable, but elevated and executed with precise technique. In a review of Modern Love for Vegan Good Life, writer Cort Cunningham noted that “the vegan deliciousness can be life-altering” and we strongly agree.

Chef Makini Howell describes what she does at Plum Bistro as “hit-and-sizzle cooking.” A former fashion designer, she moved to Seattle to open Plum Bistro in 2009  – and she’s certainly right about the hit part. Howell’s food empire has grown to include a salad shop, a food truck, an ice cream and pastry cafe, and a vegan catering service, but Plum Bistro remains her flagship. The menu prioritizes seasonal, local produce from family-owned growers, transformed into creative dishes like the a tofu and black bean dish that combines Cuban and Korean flavors or sweet potato gnocchi with black truffle, arugula, and nut-based cheese.

The sign outside Seed proclaims the restaurant is “garden-based,” and fresh-from-the-garden vegetables pop up soups, salads, and other approachable fare. The artichoke “falafel” – fried balls of artichoke, pickled cabbage, cucumber salad, toum, and fresno chile sauce – stands out on the current menu. And of course, this is New Orleans, and Seed is famous for their fluffy, sugar-snow-capped beignets.