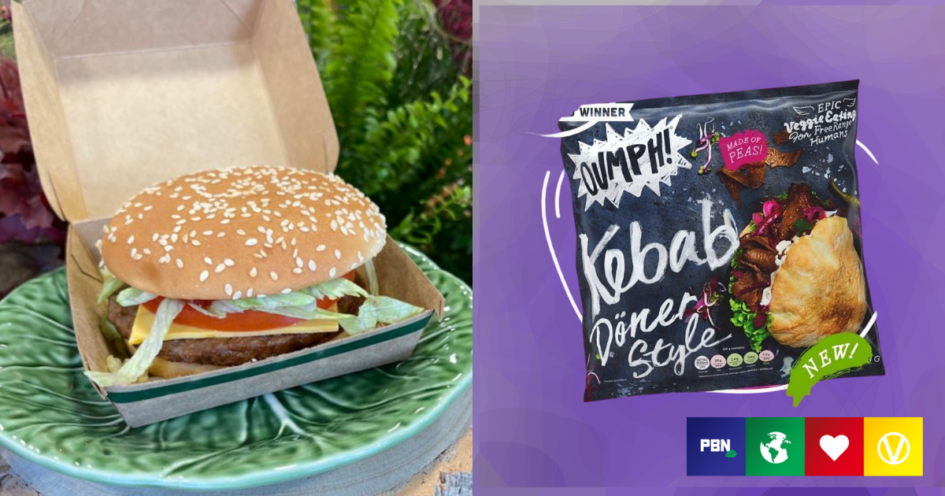 The top plant-based brands according to PETA have been announced in its esteemed annual Vegan Food Awards.

Now in its ninth year, the animal rights advocacy giant selects its best brands over 24 categories.

“From fakin’ bacon to dairy-free desserts, every winner of PETA’s Vegan Food Awards makes it easy to eat vegan.”

Here are the winners in full:

How could PETA ever make a decision in such a crowded category? Well, they managed it and Swedish brand Oumph! has been crowned the titleholders for its  Kebab Döner Style.

In a statement sent to PBN, co-founder Anders Linden said: “On behalf of the whole Oumph! team, I am thrilled to receive this prestigious award.

“This prize is energizing to everyone who has been part of creating the döner kebab and will spur us on to continue to innovate new Oumph! Nothing is too rock ’n’ roll for Oumph. As we say: taste-it to get-it!”

Again, picking the Best Vegan Burger is a tough decision. There have been countless launches this year, but it’s one of the most recent that lucked out.

McDonald’s McPlant burger, available for the same price as the fast-food giant’s iconic Big Mac scored big. And it’s because PETA reckons it will help introduce vegan food to a new audience and make it easier for vegans on the go.

‘McPlant is the burger everyone has been waiting for’, the judges added.

Plant-based chicken options are one of the biggest expansions within the vegan meat sector. Despite KFC scooping the title last year, the 2021 Best Vegan Chicken goes to VFC, the brand founded by Veganuary’s Matthew Glover.

Finnebrogue Artisan Naked Without the Oink! Plant-Based Bacon Rashers are the winners of Best Vegan Bacon.

Since launching in major UK supermarkets, the brand was selected by Costa for its Vegan Bac’n Bap – making it the obvious choice.

Aldi has long been praised for its vegan options under its Plant Menu.

The supermarket’s Meat-Free Hot Dogs are the winners of Best Vegan Hotdog for their top ‘versatility’. And, they only take eight minutes so it’s no contest really.

Move over Richmond: for Best Vegan Sausage PETA picked HECK, a brand known for its range of meat products.

It’s herby Vegan Breakfast Sausages made from mushrooms are gluten-free too.

While we may not all agree on our favorite vegan pizza, it’s clear the perfect melting cheese and topics are vital.

This is why Chicago Town‘s Tomato Stuffed Crust Takeaway pizza featuring Sticky BBQ Jackfruit is the winner of this category.

They may not be a 100% vegan company, but Higgidy’s No-Pork Pies were no contest for PETA. ‘Big on flavor’ straight out the packet or as a canapé, the winning pies are packed with lentils, red pepper, and sunblush tomatoes.

The Vegan Ham and Cheese Baguette debuted in July and quickly became a fan favorite.

Dubbed smooth and creamy, the organization said it’s the ‘ideal’ choice in just about any breakfast or drink option.

All the other winners

Moreover, it was KFC that secured Launch Of The Year with its iconic Vegan Royale. Wagamama bagged Best Vegan Squid (which is a surprise to no one) and Co-Op was commended for its GRO range, winning Best Vegan Range in part due to its price matches to non-vegan counterparts.