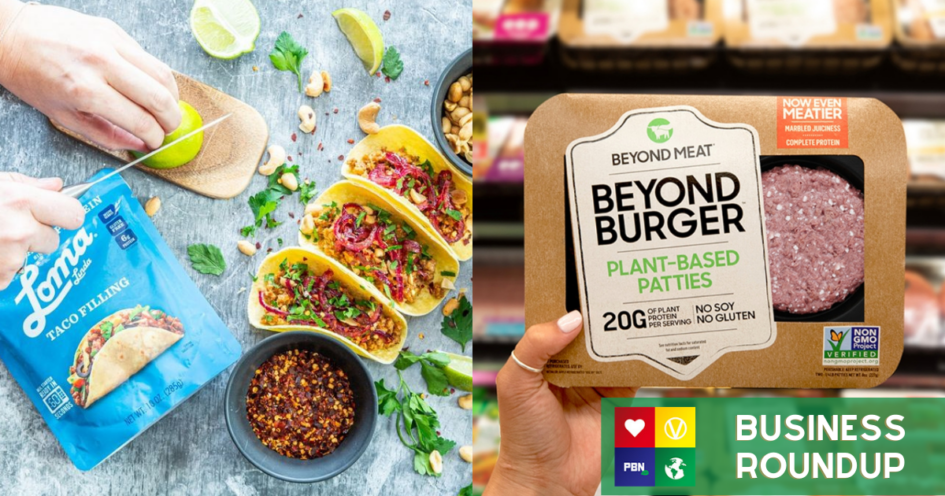 This week in plant-based business news, investors are keeping busy and vegan brands are reaping the rewards. The fish-free seafood industry is making a splash, and plant-based food producers have their sights set firmly on global expansion.

Leading plant-based meat producer Beyond Meat saw its shares take a nosedive last Friday, dropping nearly 13 percent. It’s the lowest the shares have been in almost a year.

The decline came as Beyond Meat announced estimations of a third-quarter revenue of $106 million. This is a noticeable slump compared to previous estimates, including Wall Street analysts’ prediction of nearly $135 million.

So far this year, the vegan brand’s shares are now down 25 percent. The company – which was the first plant-based meat brand to file for an IPO – blames the COVID-19 Delta variant, as well as extreme weather for the decline.

“Since discovering the Shicken range, and being absolutely blown away by how good the dishes were, I contacted the founder Satvinder to see if Veg Capital could invest,” said Veg Capital’s Managing Director Matthew Glover. “The sauces are better than restaurant quality, in my opinion, and my meat-eating friends couldn’t believe the pieces weren’t real chicken.”

Veg Capital will assist Plant Alternative in sizing up through food service, retail, and export. Its first port of call? Launching into a ‘major UK retailer’, a press release says.

The companies have not yet revealed specific details, but promised the launch will be ‘soon’.

Eat Well Group, a publicly traded investment company, is set to acquire a preferred equity position in Amara Organic Foods, a plant-based baby food brand. According to the company, Amara’s baby food is fresh, organic, non-GMO, and low in sugar.

“Amara has proven an impressive ability to scale through retail distribution and eCommerce excellence, and the funding and industry expertise provided by the Eat Well Group will help accelerate Amara’s growth as we head into calendar 2022,” Aneed said in a statement sent to PBN.

He added that Amara is honing in on ‘products that consumers love’, with an overarching mission of improving infant nutrition.

Amara is also responding to demand, since consumers are ‘driving disruption in the legacy dairy industry’, Aneed noted.

Fish-free seafood companies have made a splash this year, raising $116 million in investment capital during the first half of 2021. That’s according to a State of the Industry Report assembled by non-profit Good Food Institute (GFI).

It’s a significant leap from its previous earnings; throughout all of 2020, the alternative seafood industry netted $90 million.

The partnership will help ANF expand its global reach, which already includes 25,000 stores in 30 countries.

With a combined history of 250 years, the two companies now make up the first shelf-stable producer of plant-based foods with total vertical integration, a press release says.

Martin Williams is President and Chief Innovation Officer of Above Food, which aims to create a healthier world ‘one bite at a time’.

Grounded uses fermentation to craft its vegan dairy, focusing especially on hemp seed and cauliflower. Consequently, the dairy-free goods are free from nuts, soy, and gluten.

Grounded intends to use the new funds to expand retail distribution throughout the US.

“We look for outlier entrepreneurs who have the potential to make a global impact,” Fabian Hansen, founding partner of Presight Capital, said in a statement.

“Grounded addresses an immediate need in the market for high quality, nutritious and sustainable dairy cheese alternatives — and due to the scalability of their process, we see enormous potential for the company to expand not only in the US market but internationally.”

Eat Beyond welcomes vegan dairy brand Beyond Moo to its portfolio

Investment issuer Eat Beyond, said to be the first of its kind in Canada, has added Beyond Moo to its investment portfolio.

Beyond Moo produces oat-based dairy alternatives, such as yogurt, cream cheese, butter, and kefir. The products are free from gluten, nuts, soy, preservatives, and artificial flavors.

“We are very pleased to welcome Beyond Moo to our growing Eat Beyond family,” said Michael Aucoin, CEO of Eat Beyond, which focuses on the plant-based food space. “Dairy alternatives are growing rapidly in popularity, and there is particular demand for oat-based products.”

Aucoin added that the quality and taste of Beyond Moo’s offerings is ‘superior’.

Beyond Moo Founder, Yulia Weber, said the team is now focusing on expanding into new markets and distribution channels. “The Beyond Moo team looks forward to working closely with Eat Beyond to continue our business growth trajectory in this very exciting and rapidly growing space,” she said.