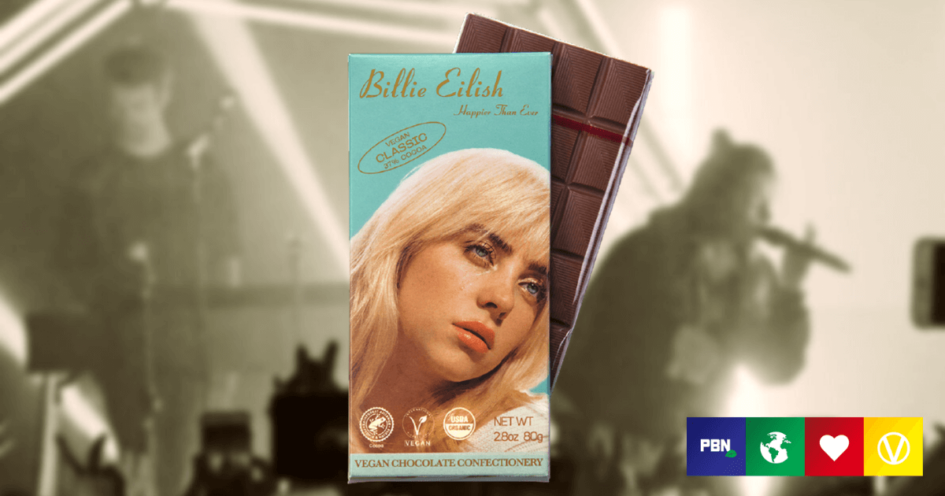 You can now get vegan chocolate merch inspired by musician Billie Eilish. Called the Happier Than Ever Chocolate Bar – after Eilish’s album of the same name – the dairy-free treat will start shipping out next month.

The new vegan candy was announced by Support + Feed, a non-profit organization centered around tackling the climate crisis and promoting plant-based food.

Actor Maggie Baird is the founder and president of the organization, as well as Eilish’s mother.

It comes wrapped in a compostable nature-flex foil, which, according to Eilish’s website, is made from “sustainable raw materials.”

The animal-free recipe is apt, given Baird and Eilish are longtime vegans.

Eilish took up a plant-based diet around seven years ago. She wrote on her blog at the time that “a lot of reasons” motivated the change, including animal welfare concerns. “Leave animals alone,” she wrote.

Since then, Eilish has frequently used her platform to raise awareness about the impact of using animals for food and fashion.

Most recently, the 19-year-old convinced fashion design Oscar de la Renta to stop using fur. In return, Eilish promised to wear one of its gowns to the Met Gala.

Those interested can pre-order the Happier Than Ever Chocolate Bar here.