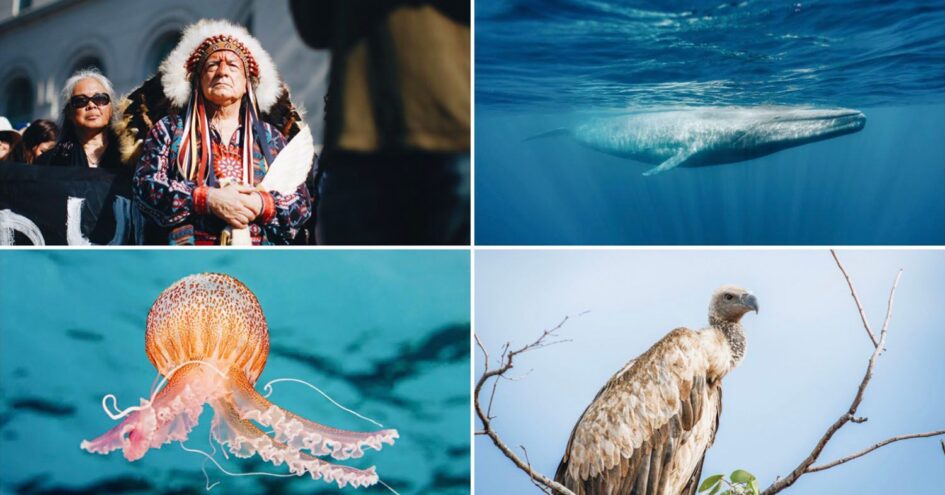 It’s been a tough week for the planet, with hurricanes, fires, and floods. But there are still some bright spots in the news that bring hope and progress to Mother Earth, from blue whales returning to Spain to “green” steel production.

The good news: Blue whales are returning to Spain’s Atlantic coast decades after they were hunted to near-extinction by Basque whalers in the 16th and 17th centuries. A blue whale was spotted off Islas Cíes, near the O Grove municipality in mid-August of this year. As reported by the Independent, several whales have been spotted in the region since 2017.

The impact: The blue whale remains endangered, but its population is slowly increasing. Whales sit at the very top of the marine food chain and are incredibly important to ocean health. According to the WDC, the animals provide at least 50 percent of the oxygen humans require to breathe, and even combat climate change by storing carbon (like sharks).

Did you know: The species is the largest animal on the planet at 200 tons, which is about the same as 33 elephants according to the WWF’s estimates. A blue whale’s enormous heart alone is approximately the size of a Volkswagen beetle, while their body length can match a 100ft Boeing 737 airplane.

In general, whales are emotionally and socially intelligent, and scientists believe that their return to the Atlantic coast could be rooted in powerful ancestral memories of life before Spain’s whaling ban in the 1980s, and even before the industry took hold. However, the creatures’ migration could also be driven by changing ocean temperatures due to climate change.

How you can help: Support whaling conservation efforts by donating time, resources, and money to groups such as Save the Whales, Sea Shepherd, the WDC, and Ocean Alliance.

Indigenous peoples will finally be represented at the IUCN General Assembly

The good news: Twenty-three different Indigenous organizations will represent groups from every continent as part of the IUCN at this year’s General Assembly. This is the first time in the 73-years since the organization’s foundation that Indigenous peoples will be able to introduce motions, vote, and participate in the creation of global conservation policy at the event.

The impact: While Indigenous groups could technically join the IUCN as NGOs, many leaders rejected this oversimplification of the definition and status of Indigenous peoples, nations, and communities. It also failed to take into account the unique—and all too often dismissed—expertise and knowledge of indigenous groups around the world.

COICA will propose that the IUCN works to conserve 80 percent of the Amazon rainforest by 2025. The motion, titled Amazonia por la Vida, will require governments to ban deforestation, suspend extractive activities, and to recognise the autonomy of Indigenous lands within the Amazon region.

Did you know: Indigenous communities live in some of the most biodiverse parts of the planet, and time and time again studies indicate the disproportionate role these communities have in conservation and environmentalism. Despite these, Indigenous groups receive less than one percent of the world’s climate funding.

How you can help: There are countless Indigenous environmental groups doing amazing work, including the IEN, Indigenous Climate Action, Native Conservancy, and Seeding Sovereignty. You can learn more about the IUCN and its work here.

Mallorca’s marine reserve is good for wildlife, humans, and business

The good news: A report from the Marilles Foundation shows that Mallorca’s marine protected area (MPA) has boosted both biodiversity and the economy. The non-profit commissioned a study which reveals every euro invested in the MPA has generated €10 of profit, addressing global concerns from coastal communities that the conservation areas will impact the economy.

The impact: Despite being requested by the Cala Ratjada fishermen’s association, the MPA has significantly slowed coastal erosion, improved water quality, and boosted the region’s biodiversity since its introduction in 2007.

Did you know: The study is part of a European MPA Networks project, and marks the first time “natural capital accounting” has been deployed to assess the worth of a Spanish marine park as a “natural asset”—a concept endorsed by some economists as a way of forcing governments to value irreplaceable and poorly protected environmental resources.

How you can help: Learn more about Natural Capital Accounting here, read about Mallorca’s unique flora and fauna here, and support the conservation group GOB here.

The impact: The releases mark the first time captive-bred vultures have been integrated into existing wild populations since serious conservation efforts began. Hundreds of vultures have been raised by researchers, who are focused on the long-billed, slender-billed, and white-rumped varieties, all of whom are critically endangered.

Did you know: While India was home to approximately 40 million vultures in the 1980s, studies show a fall of over 97 percent by the following decade. This is primarily due to the use of diclofenac (an anti-inflammatory drug) incorporated in cattle feed, while the cattle themselves are a key part of the vultures’ diet. Vultures’ role as natural waste disposers is invaluable; without them, toxins and other harmful substances make their way into the ecosystem at large.

How you can help: Support Save Vultures here, who are partnered with BNHS, and support Nepal’s NTNC here. The Vulture Conservation Foundation is working to preserve European vultures, and you can learn more about India’s vultures from Nature In Focus here.

A Swedish company shipped its first batch of ‘green steel’

The good news: Sweden’s SSAB is producing the world’s first-ever batch of “fossil-free” green steel as part of the Hybrit Project, which is co-owned by Vattenfall and LKAB and aims to produce steel using 100 percent fossil-free hydrogen. According to CNBC, the project’s first customer is the Volvo Group, which is moving towards sustainable, fossil-free manufacturing in general. Mercedes-Benz is also partnering with the companies.

The impact: Steelmaking is incredibly energy-intensive and one of the leading global sources of greenhouse gas emissions. The industry is the largest industrial consumer of coal worldwide. In a statement, SSAB said that it plans to deliver fossil-free fuel on an industrial scale as soon as 2026.

How you can help: Learn more about the UN’s policies for supporting green industry here. You can also check out Imperial College London’s helpful guide to climate action.