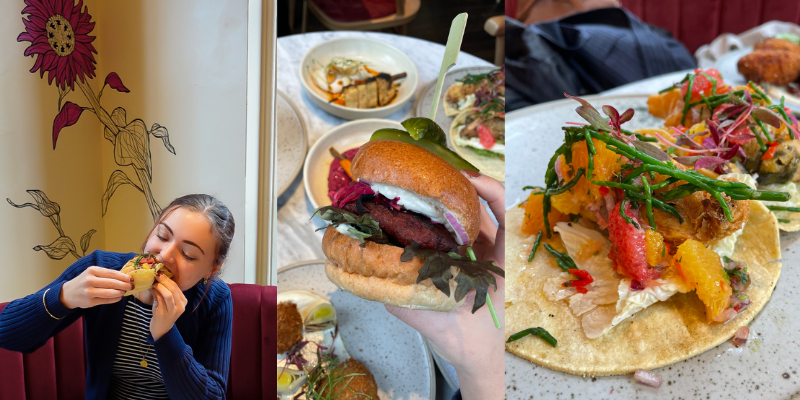 We visited Borough market’s first vegan restaurant, and this is what we thought.

Mallow is a newly opened vegan restaurant in Borough Market, London. It is sistered with the trendy plant-based eatery, Mildreds.

On the menu are dishes made with seasonal products only sourced sustainably. Mallow also aims to celebrate world cuisine by offering a variety of choices.

The company says they want to serve ‘fresh, colourful food, that’s vibrant and full of flavours. It’s been our motto since the very first mildreds restaurant opened in Soho in 1988, and one that we are proud to continue to this day.’

Usually, we would write this blog in order of starters, mains, desserts. However, the desserts were so good, and they deserve to come first. We tried the Lemon meringue and creme brulee and were blown away at how delicious they were. The meringue had a perfect peak of vegan meringue and that sharp lemon flavour with a bottom shortcrust pastry. We also tried the creme brulee, which had that sugar snap that everyone looks for.

Our other favourite dishes were the following:

Celeriac skewers, these were so great and had a smoked taste to them. It was great to see how a vegetable can be such a good replacement for meat.

Open fried banana blossom tacos. These were paired with citrus fruit which added a sharp but delicious taste.

Porcini truffle croquettes with leeks and aioli. These melt in your mouth and are very warming and comforting in the colder months.

All items on the menu are subject to change due to the seasonal produce Mallow use.

If you try it out, let us know what you think via Vegan Food UK!

We Van Life in Dorset | Visiting an Epic Vegan Restaurant