BREAKING: Pig Farm Workers Cut Off Piglets’ Tails and Yank Out Their Testicles 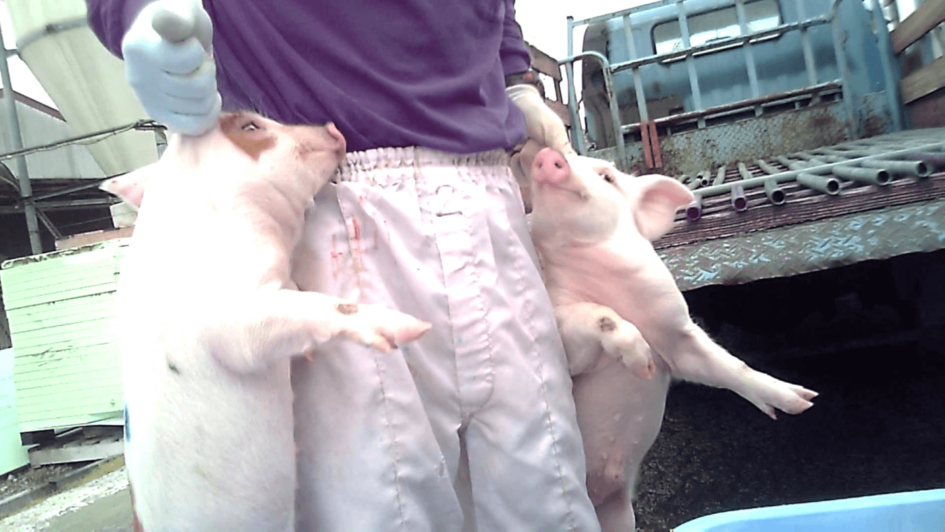 A new PETA Asia video exposé of Japan’s leading pork producer, Nippon Ham, reveals that piglets and their mothers endure horrific abuse. While the company claims to care about human happiness and the “joy of eating,” it’s obviously not concerned about animal welfare. Pigs who are raised and killed for food don’t experience joy or anything else that would make their lives worth living. Their lives are full of pain and suffering. Workers at Nippon Ham grab piglets by their sensitive ears and toss them around like inanimate objects. Those who aren’t considered “profitable,” because they’re too small or sick, are thrown out like garbage. Workers typically kill unwanted piglets by swinging them in the air and bashing their heads on the concrete floor or by injecting them in the heart with surface disinfectant. One piglet writhed in agony for five minutes after a worker poisoned him this way. Another languished for an hour and finally died after a worker bashed his head against the concrete floor.

Piglets at Nippon Ham are taken away from their mothers when they’re as young as 22 days old, just as they are on most pig farms. Workers castrate them and chop their tails off without any pain relievers. A worker was caught on camera cutting into a young pig’s scrotum and yanking out his testicles with his fingers.

Suffering and Nowhere to Turn at Nippon Ham

Mother pigs, or sows, are forced to spend most of their miserable lives crammed inside metal crates that are so small they can’t even turn around. Their muscles atrophy and they’re constantly stiff and sore. They have no choice but to urinate, defecate, eat, and sleep all in the same cramped crate. Workers were even seen beating them with a heavy piece of the metal frame. The traumatized sows had to endure the sight of their own piglets’ suffering right in front of them. Their babies squealed and thrashed violently while workers crudely castrated them or cut off their tails, and there was nothing that the mother pigs could do. Animals Born Into a Life of Abuse at Nippon Ham

Thousands of sows are confined and repeatedly raped via artificial insemination. They deliver litter after litter of piglets, who are always torn away from them to be raised for meat or breeding. When sows who aren’t forced to live on filthy factory farms are about to give birth, they make a nest in the dirt and cover it with soft grass and leaves. But at Nippon Ham, pregnant pigs have to stand on uncomfortable metal grates. After several years of round-the-clock imprisonment and frequent inseminations and pregnancies, they become exhausted and they’re sent to slaughter. You Can Help Stop Cruelty to Pigs

All around the world, cruelty is pervasive in the meat industry, which treats animals as commodities rather than as living, feeling beings. There’s no need for anyone to eat ham, bacon, sausage, or any other animal-based foods—tasty vegan options are available at most restaurants, stores, and cafeterias today. It’s easier than ever to leave pigs and other animals off your plate.

Will you help pigs by refusing to buy pork and other animal-derived foods?