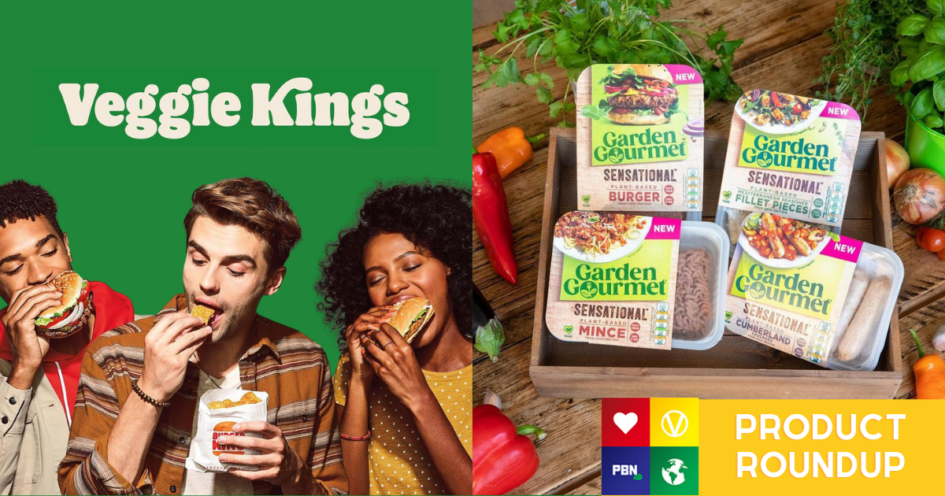 From ready meals to fast food, eating plant-based is getting easier as the weeks go by. This is the case across the globe, from Burger King in South Africa to Nestlé in the UK, and milkadamia in the US.

Here are the latest food product launches you need to know about.

Fast-food giant Burger King is adding to its plant-based options under the Veggie Kings brand in South Africa.

It announced the news this week, promising the ‘same great taste’.

In the new range is the Vegan Royale, Plant-Based Whopper, and Vegan Nuggets.

While the Vegan Royal and Vegan Nuggets are certified with the international vegan certification, V-Label, the Plant-Based Whopper is not, however.

This is because it is cooked on the same grill as the chain’s original meat-based Whopped ‘to deliver the same unique flame-grilled taste’.

Moreover, the soy-based offerings are high in protein and provide a good source of fiber.

They’re on sale from September 20, though Nestlé has not yet confirmed exactly which stores they’ll be available at.

Supermarket giant Waitrose has unveiled its biggest ever vegan and vegetarian product ranges. Under the Plantlife and GoVeggie brands, a total of 36 new offerings are available. And, 24 of them are vegan.

They include a host of ready meals, including Mac & Cheese Bites and Crispy No Beef with Sweet Chili Sauce.

In a statement, Waitrose’s executive chef Martyn Lee said: “We wanted to provide our customers with more choice when it came to incorporating a holistic approach to their meals. Making meat-free Monday or a flexitarian lifestyle even easier, these new ranges have inspired us to be more innovative.”

The Bury Black Pudding Company has just launched its vegan sausage products across ASDA stores in the UK.

Traditionally made from blood, the firm’s vegan version includes black beans, onions, and pearl barley and is available in a 220g pack.

Plant milk brand milkadamia, which creates its products out of macadamia nuts, is set to launch three new products next week.

The brand will debut its Ice Creamier, Skinn Milk, and Holiday Milks at a food and beauty event in Philadelphia, US.

While the Holiday Milks offer Peppermint and Veggnog flavors, the Ice Creamier comes in Chocolate, Vanilla, Strawberry, and Coffee. The Skinn Milk is a nut oil-based beauty product, consisting of a moisturizer lotion and body butter.

‘Our customers have been asking us to add more and more products to our line. And we have responded by bringing our delicious, slightly decadent macadamia nut taste and creaminess to ice cream, soft cheese and a unique line of rich, somewhat flirty, beauty products unlike anything else on the market’, CEO Jim Richards said in a statement sent to PBN.

Customers can sample the new products at the Natural Products Expo East from September 23-25.

London-based vegan artisan cheese brand launches in the US

Nuts for Cheese, a vegan cheese brand based in London, has announced it is expanding into the US market.

Since launching just six months ago, the artisan brand will soon be available across Whole Foods stores across the country.

‘Whole Foods is kind of our biggest, most exciting announcement that we’ve been really fortunate to get excited about recently’, founder Margaret Coons told CTV News.

Some regions will see the products on shelves this month, while others are expected to debut in early October.

The new meatless additions at Domino’s Indonesia feature a beef alternative, in partnership with Green Rebel Foods. Customers can choose between a BBQ and black pepper sauce or Rendang sauce, as part of the Plantt Pro Beef range.

However, while the ”100 percent’ plant-based pizzas feature vegan shredded beef, they also include cheddar cheese sauce made with cow’s milk. Moreover, the dough contains 0.02 percent milk – meaning they are not suitable for vegans.

But despite it not being vegan, Green Rebel’s co-founder said it marks a ‘step closer’ to establishing more plant-based options in Asia, GreenQueen reports.