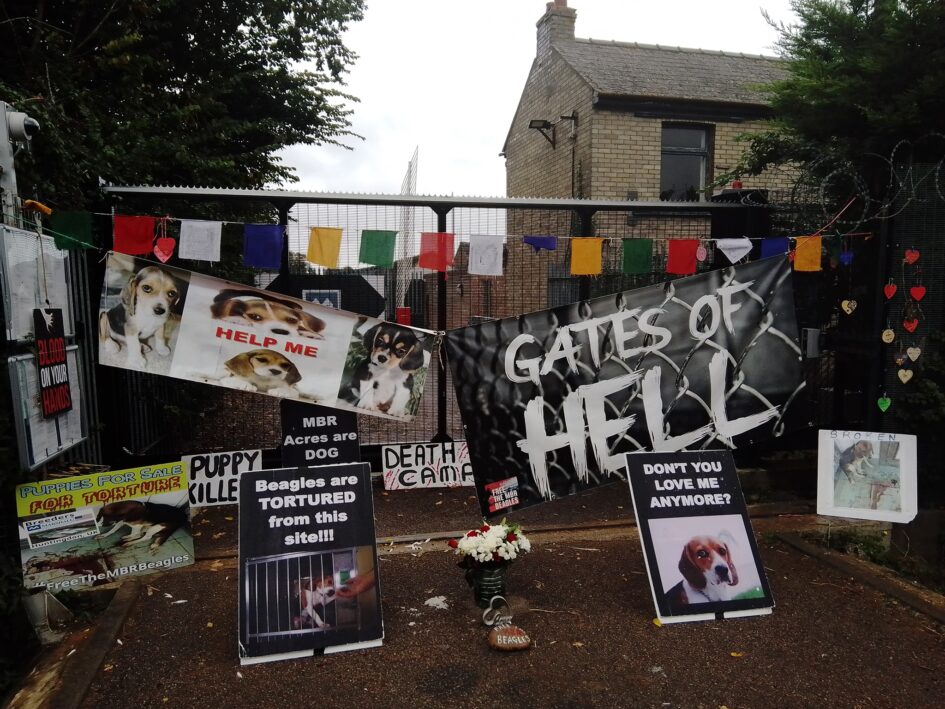 Camp Beagle was set up in early July on the doorstep of MBR Acres to protest animal testing and the breeders that make it possible. As to date, they have been camped there for almost four months.

MBR Acres in Huntingdon is owned by the American Pharmaceutical company Marshall BioResources, a global supplier of animals for medical research. It is estimated that each year the facility breeds 2000 beagles which are shipped to laboratories for cruel and unnecessary experimentation.

Camp Beagle have announced via their social media accounts that “we are not leaving without the dogs.” And after the arrests of key activists, multiple action days, and hours of tireless work, the message has proven very true: the Camp is not going anywhere.

A campaign for change

Local campaigners under the banner ‘Stop Animal Cruelty Huntingdon’ have demonstrated outside the facility for several years. The campaign gained increased support when undercover footage showing beagles transported from sheds into vans was released online. Since then, it has become more than a small local effort.

In addition to the permanent camp, activists have taken to the streets to raise awareness. Public outreach events have been held across major cities in the UK including Cambridge and London. There are several more planned this upcoming weekend.

Media coverage from major news outlets such as The Mirror, The Independent, and The BBC has allowed the campaign to come to national attention. It is the hope of campaigners that if enough people support them and act, MBR Acres will be forced to close.

Activists have also approached major celebrities and influencers in the hope they would lend their voices to the campaign or even visit the camp. Ricky Gervais and Peter Egan have supported the action online. Unfortunately, though, activists have had little success getting celebrities to visit the camp despite the large public support and online backing. A visit from a famous name would certainly make headlines.

The police presence at the camp has been obnoxiously large, as officers continue to allow the facility to transport the beagles out of the site. They also escort the workers when they leave for the day and when they arrive. After a public enquiry from a Camp Beagle supporter, it was revealed that Cambridgeshire police (as of early September) have spent £200,987 policing the site as they allow the business to continue its cruel operations.

Currently, one van of dogs is transported out every two weeks as opposed to the original weekly transportation before the protestors arrived. Progress is being made and the actions have succeeded in slowing down the process, the issue is once again in public discussion, but the campaign needs more support if it is to continue its growth.

How you can help Camp Beagle

If you wish to support the campaign you can do so by sharing content online and interacting with the Camp’s social media. The more people that know about this the better. We need to keep spreading the information to help facilitate this. In addition, joining an outreach event or visiting the camp yourself would also be a great help.

The camp is currently trying to reach 100,000 signatures on this petition to get the issue discussed in parliament. Please sign it. Please share it.