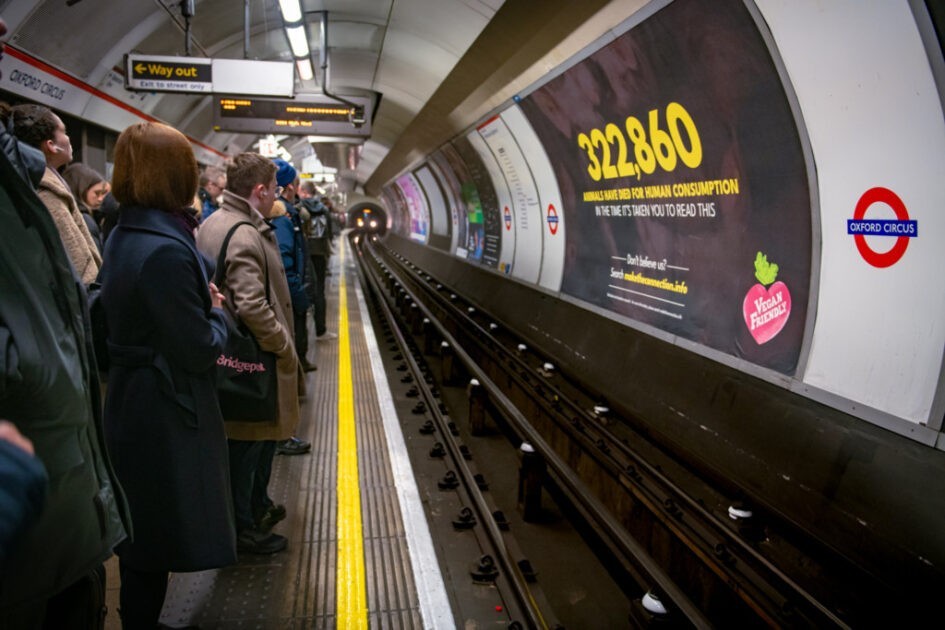 The UK branch of international nonprofit Vegan Friendly has launched an ad campaign at Oxford Circus station on the London Underground.

The advertisement, which is expected to reach 2.5 million people, highlights that 322,860 animals will be killed for food worldwide in the eight seconds it takes to read the text. It has been placed in the middle of the westbound Central Line platform, one of the highest footfall areas in London.

“This ad doesn’t hold back”

Vegan Friendly hopes the ad will help the public understand the impact of buying animal products. The organisation said it believed that consumers would be reluctant to support animal agriculture if they knew the truth about the way animals are treated.

First of many campaigns

Vegan Friendly was founded in Israel in 2012, and promotes veganism through ad campaigns, social media, major events, and more. The organisation has its own vegan certification scheme, which is used by thousands of products and businesses across Israel and the UK. Over 6,000 Israeli members support Vegan Friendly through monthly donations, and are rewarded with discounts at certified businesses.

Last year, the organisation opened its first US branch in New York City, before launching an ad campaign on US primetime television to highlight the environmental impact of beef farming. Vegan Friendly also boasts over 370,000 social media followers internationally.

“This [Oxford Circus] ad doesn’t hold back; it has been designed to hit hard and bring the harsh reality of the numbers to consumers,” said Hailee Harris, campaign and event manager at Vegan Friendly. “This is the first of many ground-breaking campaigns by Vegan Friendly UK to encourage consumers to make more ethical choices, and we believe this campaign will bring us closer to achieving that goal.”

Resolve to Go Vegan in January! Mellow Mushroom Rolls into 2023 with “Build Your Own Vegan Pizza,” Highlights Plant-Based Menu Options

Around 85,000 Healthy Farm Animals Killed And Discarded Due To Slaughterhouse Staff Shortages

Inside The UK Farming Industry: How Are Animals Kept And Killed In Britain?