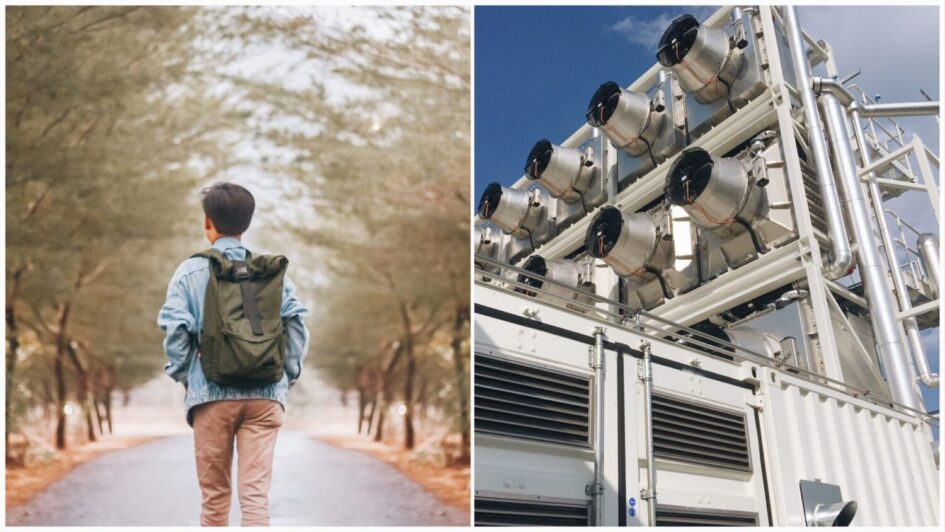 As plants and trees grow, they take in carbon dioxide (CO2) from the atmosphere and transform it into sugars through photosynthesis. Carbon capture technology imitates this artificially by either capturing CO2 (often as part of industrial production processes) or removing it from the air itself.

The climate crisis is getting worse, and continued carbon emissions aren’t helping. CO2 is a greenhouse gas (GHG), and the increasing atmospheric concentration of these gases causes global warming. Reducing the amount of CO2 in the atmosphere is an essential part of climate mitigation, either through prevention or removal.

While CO2 is not the most potent GHG, it is the most common, primarily due to fossil fuels. And, it is the largest contributor to the ongoing climate crisis.

With this in mind, could modern carbon capture technology save us from the worsening effects of climate change? And if so, how does artificial carbon capture actually work?

Naturally occurring sources of carbon emissions include decomposition, the ocean, wildfires, and volcanic eruptions. But, we are releasing huge quantities of carbon back into the atmosphere over the space of just a few hundred years through the burning of coal and oil.

This is causing the rapid global heating documented around the world. And, it’s contributing to extreme weather events such as fires, storms, and droughts.

According to climate.gov, carbon levels are higher now than in the last 800,000 years. The fossil fuels that we use for heat and energy (coal, crude oil, and natural gas) are so-called because they come from the fossilized remains of living organisms.

These fossil fuels are extremely high in carbon, originally pulled from the atmosphere by living organisms such as algae, plants, and bacteria via photosynthesis over the course of many millions of years.

Burning them for heat and energy releases this carbon back into the atmosphere, thereby raising the global temperature.

How much warming is carbon causing?

The Environmental Protection Agency (EPA) says that the total warming effect from human-released GHGs between 1990 and 2015 was 37 percent. Carbon emissions alone have caused warming at around 30 percent, while the Intergovernmental Panel on Climate Change (IPCC) states that human activities, in general, have caused 100 percent of the global warming observed since the mid-1900s.

Reducing carbon production is the ideal solution to this and there are more global efforts to reduce human-caused emissions and general pollution than ever before.

However, even if we reduce our dependence on fossil fuels, animal agriculture, and other key contributors to global warming (such as deforestation, ocean mismanagement, and the widespread extinction of flora and fauna), it would take a long time for the planet to cool down.

For example, if we stopped producing GHG emissions now, the temperature would continue to rise for decades. We could expect a delay of around 40 years before the climate finally stabilized, and this would still be at a far higher temperature than before. That’s where carbon capture technology comes in.

How does carbon capture technology work?

Carbon capture and storage (CCS), also known as carbon control, involves the capturing of waste CO2 and storing it where it cannot enter the atmosphere. This is an artificial version of carbon sequestration, the natural process performed by plants, trees, soil, and the ocean.

CCS includes two distinct processes: capture and storage. There are three different varieties of capture, including pre-combustion, oxyfuel, and post-combustion.

The goal of pre-combustion is to remove carbon from coal-based fuel prior to burning. Combined-cycle power plants, which use both gas and steam turbines, are the typical location for this technology. These plants process coal to create a synthetic gas of carbon monoxide and hydrogen. The carbon monoxide content is then processed into CO2 while hydrogen is diverted and burned for electricity.

It can be challenging to separate CO2 for capture during the burning of fossil fuels. But this would be far more straightforward if plants produced pure carbon from their smokestacks. Oxyfuel involves burning fuel within a high oxygen environment, making it easier to process and transport the purified carbon to a storage facility.

Post-combustion, also known as absorption or carbon scrubbing, is the only form of capture that is already in-use at an industrial level. While pre-combustion and oxyfuel can help build more environmentally sound plants, post-combustion is the easiest way to clean up existing facilities.

This type of capture is typically carried out in industrial settings, including power plants and factories. Carbon capture technology is most effective at source, though removing CO2 from the air itself has become possible in recent years. This is known as direct air capture.

At the start of September, Switzerland’s Climeworks and Iceland’s Carbfix announced that its direct air capture plant was up and running. Named Orca after the Icelandic word for energy, “orka,” the facility will draw approximately 4,000 tonnes of carbon dioxide (about the same emissions as 870 cars) from the air every year.

How is artificially captured carbon stored?

The Orca facility combines CO2 and water and injects it at a depth of 1000 meters into nearby rock. It is mineralized and turns to stone after about two years.

Professor Frost from the Queensland University of Technology School of Physical and Chemical Sciences explained the process in detail to Science Daily.

“The concept of geosequestration involves liquifying carbon dioxide and depositing it into mineral zones below the earth’s surface where chemical reactions of the liquid CO2 with minerals stabilize it in solid form,” he said.

Initially, the ocean itself was thought to be a storage option for captured carbon. But this causes such exaggerated acidification that it would have a significant impact on marine ecosystems.

CCS is possible, but its effectiveness and practicality is much debated, and commentators are typically either vocally for or against it.

Proponents maintain that, as fossil fuel-based power plants are here, we need to reduce the carbon footprint of this industry. According to Carbon Brief, coal generates nearly 40 percent of the world’s electricity, and affordable power is particularly important to the growth of developing countries.

Moving away from coal will be difficult, and CCS could present a unique way to streamline energy production in the transition to renewables. Both Bill Gates and Elon Musk are both strong advocates for the technology.

Gates is actually a key investor in Carbfix, one of the Orca plant collaborators, while Musk recently offered a $100 million fund for a carbon capture contest to encourage the development of new tech to move the industry forward.

“This is not a theoretical competition. We want teams that will build real systems that can make a measurable impact and scale to a gigaton level,” announced Musk back in February. “Whatever it takes. Time is of the essence.”

There are currently approximately 20 carbon capture, usage, and storage programs (CCSUs) operating commercially. But according to the International Energy Agency (IEA), many more are needed in order to successfully reduce carbon emissions.

What about natural forms of carbon capture?

Carbon sequestration is the earth’s solution to “normal” levels of carbon emissions, but it can’t cope with the huge increase in emissions caused by humans post-industrialization.

Deforestation, the burning of peat bogs in the UK, seagrass destruction, monoculture and factory farming, and countless other destructive practices are all reducing the natural world’s ability to sequester the increased carbon we are releasing into the atmosphere.

Halting destructive practices in favor of sustainable alternatives can help maximize carbon sequestration. And planting trees, seagrass, and other plants can help replace some of the natural resources destroyed in the last several hundred years.

According to the Woodland Trust, one hectare of young wood and mixed native species can lock up over 400 tonnes of carbon, while old-growth forests are even more effective at absorbing carbon.

However, we would need to plant over 1.5 million hectares of additional woodland in order to reach net-zero carbon. While this would also help promote biodiversity and reduce pollution in general, it is unlikely that we will be able to plant enough trees quickly enough to effectively counter carbon emissions.

Artificial carbon capture is one way of compensating, but it’s not without risk.

The problem with carbon capture

The carbon capture process is extremely energy-intensive, and critics say that this time and money could support renewables and more reliable, tested sustainable infrastructure instead. Others suggest that CCS could give industry groups and companies imagined carte blanche to continue emitting as normal without meaningful commitments to emissions reduction.

Despite some successful experiments in CCS technology, it remains untested on a large scale. And along with its relatively unproven nature — and increased cost of operations — there is a lack of hard data on how and when it could re-emerge.

For example, some studies indicate that it could remain buried for up to 10,000 years.

According to a report commissioned by Friends of the Earth and Global Witness, 81 percent of captured carbon has been used to extract additional oil from existing wells. The report also highlights the fact that thus far, CCS technology has not lived up to the high expectations of its proponents, and in some cases has been up to 30 percent less effective than initially hoped.

“In this context, fossil fuel CCS is a distraction from the growth of renewable energy, storage and energy efficiency that will be critical to rapidly reducing emissions over the next decade,” reads a statement from the organizations.

Another study, published in the journal Energy & Environmental Science, echoed this sentiment. Study author Mark Jacobson told Phys.org that even if CCS technology was able to capture 100 percent of carbon, it would still be more efficient to invest in new sustainable technologies.

“There is a lot of reliance on carbon capture in theoretical modeling, and by focusing on that as even a possibility, that diverts resources away from real solutions,” said Jacobson. “It gives people hope that you can keep fossil fuel power plants alive. It delays action.”