Can Vegans Save the Traditional Jewish Deli? 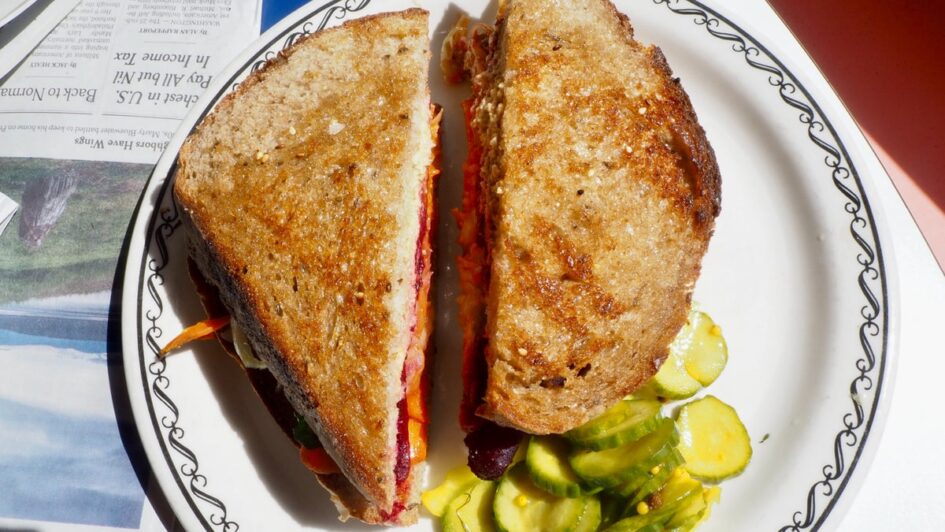 Pastrami on rye. A Reuben buried in melted cheese and Russian dressing. Juicy, tender brisket. Just some of the staples that come to mind when thinking about a Jewish deli. It can seem like the only animal safe at the deli is a pig. But that perception is quickly changing as a new generation of Jews breathes life back into the classic deli – a model that’s been on a long decline since its mid-20th century peak. The biggest difference from these contemporary heroes to their deli predecessors is the inclusion of vegetarian and vegan deli options. Not only are plant-based options finding a place on the menu, in some places they’re taking over entirely with fully-veg deli pop-ups and brick-and-mortars appearing across the country.

Megan Tucker was working full-time for Whole Foods Market in 2017 when she started yearning for a return to the kitchen. Around that time she started experimenting with a carrot lox recipe, mimicking the kind of salmon (lox in Yiddish) typically found on a bagel with cream cheese. While working on the recipe, Tucker realized there were no vegan delis. That’s when her objective became clear.

“I just set out at that point to veganize recipes from my childhood,” she said, her eyes focused through a pair of 1960s-esque cat-eye framed glasses. “And so in 2018, I started the business as a pop-up.”

The pop-up, Mort & Betty’s, takes online orders and offers pickups at Crafted Kitchen in Los Angeles. Vegans looking for a taste of Yiddishkeit can also find them Sundays at Smorgasburg L.A., a weekly open-air food market.

“I wanted to do something that was authentic to me, but also something that didn’t already exist,” said Tucker on her decision to make the deli vegan. “It just sort of all fit together.”

Veganizing her recipes also opened the door for vegans to sample traditional Ashkenazi Jewish cuisine. Tucker gave the example of a non-vegan Jewish customer who used Mort & Betty’s to introduce his vegan girlfriend to the foods he grew up around.”He didn’t really have a way to share his upbringing and background with her,” she said. After he visited, he sent Tucker a message about how coming to Mort & Betty’s helped him share something important to him with his partner.

But it’s not just about rekindling and sharing nostalgia. It’s also about showcasing what you can do with a vegetable. “People who are not vegan are just so surprised that vegetables can taste so good.”

“The deli has always been my sweet spot”

Around the same time that Tucker was veganizing her recipes, Detroit-born Andy Kalish started planting the seeds for his own vegan Jewish deli.

“The deli has always been my sweet spot,” said Kalish. “I grew up in a conservative Jewish community with all the trappings of the bakery, the deli, the meat market. It was all part of my life’s routine.”

Kalish reminisces fondly about his lifelong love of chopped liver, lox, gefilte fish, and corned beef sandwiches – the nuts and bolts of a traditional Jewish deli. These are the dishes he ate with his grandparents and friends. But while the food is in his DNA, he never imagined opening up a deli himself.

“It just seemed like something that old people did,” he said, imagining the long beards, heavy clothes, and Yiddish accents of his childhood. But as he got older, he realized it was something that’d long been on his mind. His wife, Gina, pushed him to pursue the idea, so he got to work on creating recipes based on the vegan meats they were already using at their Chicago restaurant, Kāl’ish, altering them for flavor and composition.

The result is Sam & Gertie’s Vegan Jewish Deli. The menu is practically indistinguishable from a traditional deli with its bagels and cream cheese, smoked lox, chopped liver, pastrami, and corned beef topped with onions, tomato, slaw, sauerkraut, and pickles, alongside a selection of knishes and latkes (with the Midwestern lat-key pronunciation). To make it all vegan is simply a reflection of Kalish’s values.

“I don’t think anyone lacks awareness of the impact that an animal-based diet has on our environment and our bodies,” he said. “What you choose to do with that awareness is entirely up to you.”

That awareness also inspired New York-born, Miami-raised Justin King to transition his business from an old-school deli into a plant-based one. King’s Ben & Esther’s opened in Portland, Oregon’s trendy Roseway neighborhood in 2019 as a bagel shop with traditional Jewish deli fare, like whitefish and smoked salmon.

King, who has long followed a plant-based diet, wasn’t actually eating the food he was selling. For him, the deli was purely a business decision; he thought a Jewish deli would do well. But after a year, King just couldn’t reconcile it with his values. Ben & Esther’s evolved into a fully vegan deli over the past six months – taking a risk amid the ongoing pandemic. The kitchen made lox with salt-roasted carrots, used brined-and-smoked hearts of palm for the whitefish, baked their babka and rugelach with Earth Balance vegan butter, and sourced vegan deli meats from Unreal Deli.

The transition wasn’t without speed bumps. Speaking from his shop, wearing a black apron emblazoned with the phrase “Eat Like You Give A Damn,” King spoke of naysayers, losing customers, and weathering an onslaught of negative Yelp reviews from people who hadn’t even tried the food. King’s own father – the son of the namesake Ben and Esther – advised against the transition.

“He said Ben and Esther were rolling in their graves,” recalled King with a smile.

King and his team quickly rallied, thanks in large part to the support of Portland’s vegan community who came out and wrote positive reviews until non-vegans got on board. Those non-vegans now make up the majority of his customers.

Now with a second location in Portland, a brand new spot in San Diego, and a summer opening planned in Seattle, King sees nothing but opportunity. Even his dad eventually came around.

“He’s a huge advocate for the shop,” King said, adding that his father even believes the vegan recipes hold up to the original versions Ben and Esther made.

Referring to himself as someone who has the tendency to go all-in, King says he wants to franchise his concept and normalize the vegan deli concept everywhere Looking at the menus of some of the newer openings from Cleveland to Fargo, the idea of vegan deli options seems to already be taking root.

Larder opened in 2018, housed in a handsome mid-19th century red-brick firehouse in Cleveland’s Hingetown enclave. The restaurant quickly snagged a James Beard Award nomination for Best New Restaurant (2019) and then another for Best Chef, Great Lakes (2020) for the kitchen team of Allie La Valle-Umansky, Jeremy Umansky, and Kenny Scott. Though very much a traditional deli with its meaty offerings, their seasonal menu changes daily and often includes vegan or vegetarian spins on Ashkenazi classics, like a mushroom-based pastrami or the vegan charcuterie cold cut sandwich.

Then there’s BernBaum’s in Fargo, North Dakota where co-owner Andrea Baumgardner blends her Scandinavian heritage with her husband’s Ashkenazi roots. Vegan lox and their vegan Reuben are at the heart of the menu.

“Three or four years ago, one of the cooks I was working with wanted to do a vegetarian lox, and he found a recipe to make some facsimile with smoked carrots,” said Baumgardner. “When we opened in this site two years ago, we decided to expand on that.”

That expansion meant making use of one ingredient, the smoked carrots, in multiple dishes. This became the building block of their vegan Reuben, complete with sauerkraut, cashew cheese, beets, and a Russian vinaigrette smashed between slices of their homemade sourdough bread.

“We sell a lot more of it than we ever thought,” she said. “It’s a great seller.”

Judging from the general increase in plant-forward consumers feeling a nostalgic longing for the return of the neighborhood deli, it seems vegan takes on these Ashkenazi classics will continue to sell well – and over time, might even become the norm.

“I would like [vegan Jewish delis] not to be niche,” said King, envisioning a future where vegan delis are a dime a dozen, like the heyday of classic delis in New York City. “I’m hoping that vegan food, in general, will just become the norm. […] We’re trying to make meat-eaters feel at home when they come in and eat. If I could get someone to eat one vegan sandwich a week, I think that’s a big difference. That’s one less meat sandwich.”

Given the increased popularity of veganism and environmental awareness among younger people, the rise of vegan delis also helps secure the legacy of Ashkenazi Jewish cuisine. This is a cuisine that’s survived thousands of years of persecution, forced relocation, and assimilation. Now, it stands to survive shifting diets. Yiddishkeit and its Reubens, matzo ball soups, and chopped ‘liver’ will continue to thrive for another generation.

This Vegan Market, Deli, and Coffee Shop Is the Best-Kept Secret in LA

The Top Five Restaurants For Vegans In The UK