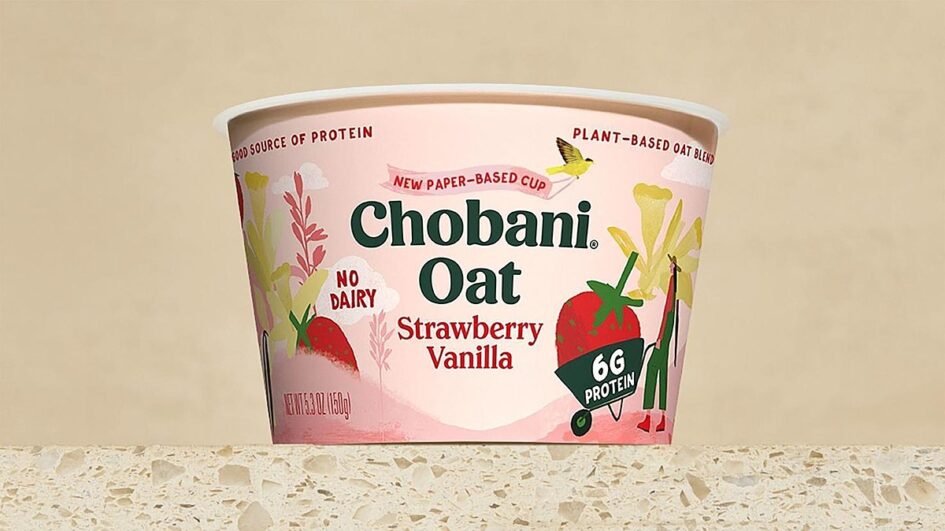 Chobani is adding a new sustainability measure into its production process, introducing a paper cup for its signature vegan oat milk-based yogurt. The company – known primarily for its range of Greek-style yogurts – announced that it would be redesigning its packaging to produce a more sustainably manufactured container. The new packaging cups will consist of 80 percent paperboard to replace the majority of the plastic in its previous design. Currently, the food brand packages its cold brew coffee, creamers, and oat milk in paperboard, making the oat milk yogurt the latest in its overall sustainable push.

“We all have a role to play in protecting our planet,” Chobani Founder and CEO Hamdi Ulukaya said. “People have been asking for a paper cup, and we welcome this challenge to start reducing our plastic use, and to spark a conversation about how we can drive change together.”

Despite discrepancies between recycling facilities that may make this change difficult, Chobani’s CEO hopes that this change will encourage industry-wide repackaging as well as more in-depth recycling practices. Ulankaya explained, “While this paper cup is a step in the right direction, it’s just the beginning,” discussing the company’s goals for sustainability into the future. The food company will complete the introduction of its paperboard oat yogurt cups by the end of the year while developing sustainable packages for its other products.

Chobani also plans to team up with the Sustainable Packaging Coalition to advocate for nationwide improvements in the recycling infrastructure. With concerns of waste and excess plastic production rising, the company aims to not only redesign its own product packages but also restructure the recycling industry.

“Innovative packaging often challenges the current recycling capabilities across the U.S.,” the company said. “As part of our work in bringing this cup to market, we will continue collaborating with partners, including the Sustainable Packaging Coalition, and policymakers to advocate for improvements that expand the recycling infrastructure in this country.”

10 Sustainable Back to School Supplies