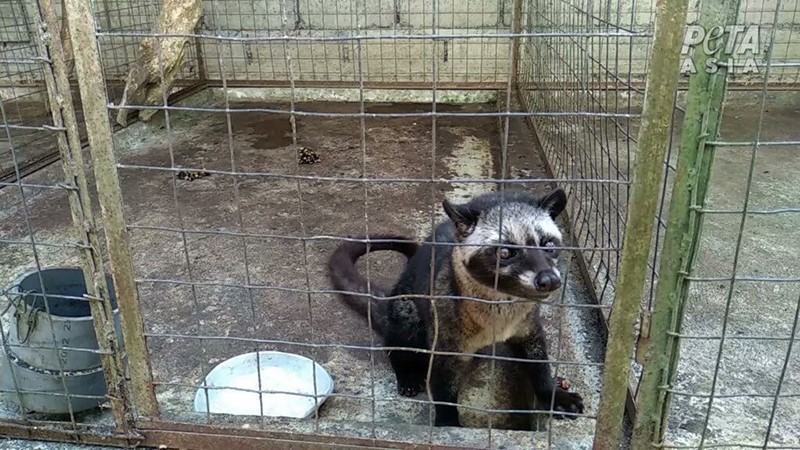 After hearing that Asian palm civet cats suffer when they’re taken from their homes in nature, shoved into cramped cages, and forced to eat unnatural amounts of coffee berries so that their excrement can be sold as kopi luwak coffee, many businesses have made the compassionate decision to pull it from their shelves.

Others, like Bacha Coffee, have chosen to continue profiting from animals’ misery for a novelty product that no one needs.

PETA investigators visited kopi luwak farms and found disturbing cruelty at every one. Nocturnal civet cats, who naturally fear humans, were confined to small wire cages in the sun with no dark place to sleep and were subjected to a constant barrage of unwanted human contact. Their cages were encrusted with feces, rotting berries, and other filth, and they panted incessantly in the heat. Numerous civet cats exhibited signs of extreme psychological distress, including pacing and biting themselves. Investigators saw several with open, bloody wounds, but the cats didn’t appear to receive any veterinary care. At least one was seemingly blind.

The civet cats were fed an unnatural and unhealthy diet consisting of an excessive amount of coffee berries in order to maximize farms’ profits. Many of them were losing their fur because of malnourishment.

In a message to PETA, Bacha Coffee claimed to sell only “100% wild and ethically sourced kopi luwak coffee.” Kopi luwak sellers commonly make similar claims, but farmers told PETA’s investigators that it would be nearly impossible to collect enough wild civet cat excrement to produce the coffee. One producer admitted that they may collect a small amount of beans excreted by free-roaming civet cats, mix it with the beans from their cages, and misleadingly call the coffee “wild-sourced.” Another told an investigator who was posing as a buyer that he could just label the coffee produced by caged civet cats as “wild.”

It’s Time to Cut the Crap
Kopi luwak isn’t a delicacy—it’s a disgrace. No matter what country you’re in or what assurances you’ve received, please don’t purchase or drink it.

PETA has sent Bacha Coffee evidence that “wild” civet coffee is essentially a lie, but it has ignored our requests to stop selling it. Help us urge Bacha Coffee to stop funding cruelty to civet cats by ending its sale of kopi luwak today.

Personalized letters always work best. Feel free to use the sample one provided, but keep in mind that your letter will carry more weight if you write your own customized subject line and message.

Dogs Suffer When Used for Sledding: Watch ‘Dogs in Distress’

PETA’s Wish List for Cats and Dogs: What Animal Companions Want This Christmas

Rescued! Big Cats, Lemurs, and Others Move to Sanctuary From Local Roadside Zoo