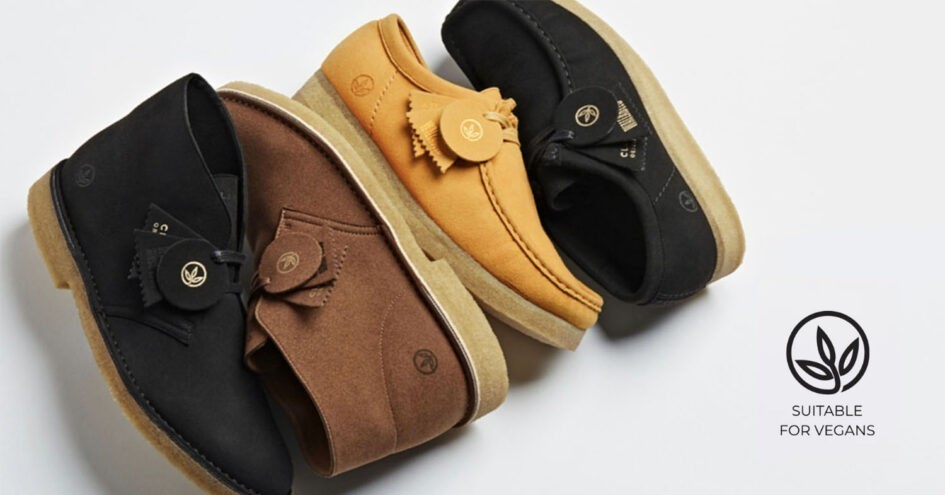 The New Vegan Icons collection includes black and brown iterations of the high-ankled Desert Boot and black and yellow models of the Wallabee. The latter complete with its distinctive moccasin-style seam around the upper edge of the toe box.

A simple leaf logo marks these iterations as vegan-friendly. This appears both above each listing on the website and on the heel of the shoes themselves.

“You asked. We listened,” wrote Clarks. “Meet the all-new Wallabee and Desert Boot, our two most loved profiles carefully crafted in Portugal with non-animal derivative materials for all the style with none of the leather. An ethical update dedicated to a vegan lifestyle.”

The two designs are the first-ever vegan shoes introduced by Clarks after nearly 200 years of operation.

The beloved company introduced its original Desert Boot in the 1950s. They are based on the simple ‘chukka boots’ worn by British soldiers in Egypt during World War II. Their smart-casual design remains enduringly popular in British men’s fashion today.

Meanwhile, the moccasin-style stitching of the Wallabee shoes is synonymous with British school uniforms. Thanks to its smart aesthetic, comfortable design, and use of half-sizes, the Clarks brand is still a go-to for parents whose kids are heading back-to-school.

But Clarks shoes aren’t just for children. Wallabees became popular with American rappers after seeing them paired with suits by Jamaican New Yorkers—a common style in Jamaica’s Rude Boy movement of the 1960s. Then, in the 1990s, hip-hop artists such as Wu-Tang Clan’s RZA (an outspoken vegan) and Ghostface Killah popularized the shoes once again.

The vegan fashion industry is more popular than ever, and shoes are no exception. According to a 2019 study, shoes account for approximately 73 percent of all vegan fashion purchases. Clarks isn’t alone in veganizing its most iconic shoes, and brands including Adidas, Doc Martens, and Vans have all launched sustainable versions of their classic designs.