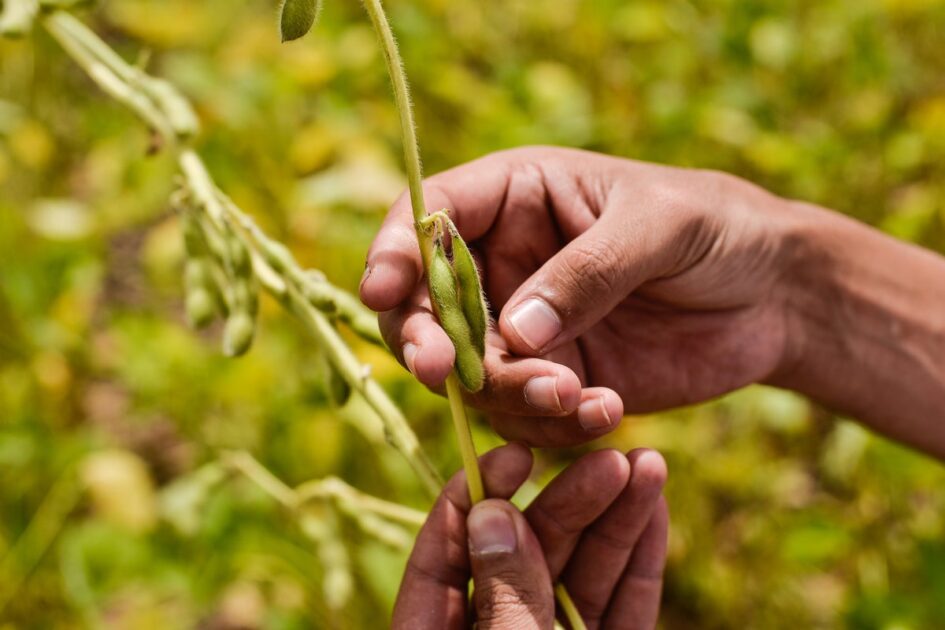 In 2010, economist Ekin Birol was roughly a year into her new job fighting world hunger when she first heard the news at a research conference: a growing body of data showed that climate change was eroding the nutritional content of staple crops.

A senior research fellow with the International Food Policy Research Institute and the director of impact and strategy at HarvestPlus, Birol works to reduce nutrient deficiencies in diets around the world — an issue she calls “hidden hunger.” People experiencing nutrient deficiencies may not feel or look hungry, she says, but their poor diet might still be responsible for decreased immunity to disease, increased mortality in childbirth, and difficulty with brain development and learning in children.

This hidden hunger is responsible for millions of dollars in lost health and productivity each year, and it’s getting worse, Birol says. Staple grains and vegetables contain fewer nutrients than they used to due to human intervention, and emerging science suggests climate change will only accelerate the situation.

According to research from the Harvard T.H. Chan School of Public Health at Harvard University, if CO2 levels in the atmosphere rise to the level predicted by 2050, important crops such as soy, wheat, rice and corn may contain eight percent less protein, five percent less iron, and ten percent less zinc than today’s foodstuffs. That’s on top of increasing concerns about changing weather patterns and reduced agricultural production, putting millions of people who do not or cannot eat animal products at risk of nutritional deficiencies.

“For vegetarians and non-vegetarians, there is a lot of volatility in the food system,” says Dr. Samuel Myers, director of the Planetary Health Alliance at Harvard University. But vegetarians, he says, “need to worry more than omnivores about the nutritional impacts of climate change.”

Evidence that climate change and nutrient loss in plants could be related first emerged in the 1990s, but questions remained after those preliminary papers as to the exactly what had happened, according to Myers. Yes, the plants in the study were exposed to abnormally high concentrations of CO2 while growing in greenhouses, but there were other plausible explanations as well, such as the effect of being grown in pots or of the studies’ small sample size.

Myers became involved in the research in the late 2000s, bringing together agronomists from all over the world growing a variety of staple food crops to replicate the research and eliminate questions about the source of the change. In 2014, his team published a paper in the journal Nature describing what they had found: when wheat, corn and other crops were exposed to excess CO2, the production of protein and key minerals declined. They later continued with analyses to estimate the extent of the nutritional losses by 2050.

“What we found was somewhere around 150 to 200 million people pushed to new risk of zinc and protein deficiencies, in addition to about a billion people who already suffer from protein deficiency,” Myers says. The loss of dietary iron, which is associated with anemia, will affect some 1.4 billion women and children, according to Myers’ research.

“What we found was somewhere around 150 to 200 million people pushed to new risk of zinc and protein deficiencies, in addition to about a billion people who already suffer from protein deficiency,” Myers says. The loss of dietary iron, which is associated with anemia, will affect some 1.4 billion women and children, according to Myers’ research.

What causes the plants to produce fewer nutrients remains unclear, Myers says. While some of the plants grew faster thanks to the fertilizer-effect of the CO2, the decreased nutritional value of the grain was not uniform across all the minerals studied, suggesting the CO2 had done more than simply dilute the nutrients with rapid growth.

In addition to the loss of nutrition amid rising CO2, increased temperatures and changed precipitation are also expected to reduce the amount of grain produced per plant by 15 to 25 globally, Myers says. Then there’s the potential changes in pests and pollinators as bugs follow new climate patterns, decreased availability of water and other factors.

“Fundamentally, we are doing a global experiment on a food system that has been tailored to the production of staple” foods, Myers says. “Chances are, it’s not going to be great. We’ve optimized our cultural system for current conditions, and now we are changing those conditions really fast.”

The changing climate is also on a collision course with another man-made activity: the selective breeding of plants to increase crop productivity at the expense of nutrition, the environment and biodiversity. Farmers and supply chains focused for decades on optimizing the agricultural system for the mass production of staple crops, especially wheat, corn, sugar, and rice.

Today, 60 percent of the calories consumed globally come from these few staples, according to Mark Lim, a strategist for plant-based foods startup WhatIF Foods. In the rush to breed plant varieties that produce the maximum amount of calories on a minimal amount of land, the nutritional content of these staples fell by the wayside.

“Just because you’re eating a fried sweet potato, thinking you’re getting vitamin A — the vitamin A content of that potato is much less than it was ten years ago,” Birol says. “You need to know what is in your food. Even if it’s not processed food, you need to know the quality of what you are eating has fallen.”

“Just because you’re eating a fried sweet potato, thinking you’re getting vitamin A — the vitamin A content of that potato is much less than it was ten years ago,” Birol says. “You need to know what is in your food. Even if it’s not processed food, you need to know the quality of what you are eating has fallen.”

The problem with nutrient loss, Myers says, is that unlike calories, you can’t necessarily solve deficiencies simply by producing more food.

“We regulate our caloric intake very carefully to maintain constant body weight,” he says. “It doesn’t work to consume more as a way of addressing deficiency. You can’t respond to zinc deficiencies by eating more rice.”

But there are, Myers says, a variety of potential solutions — plant breeding, cultivating new food crops, new fermentation techniques, and other innovations will all be critical to feeding a growing population in the future.

This is where efforts like WhatIF Foods and HarvestPlus come into play. As a global research-based initiative, HarvestPlus began with the idea that breeding better plants could provide a valuable solution to nutrient deficiencies in low- and middle-income countries. Rather than changing local customs, Birol says, the organization set out to augment them, working with farmers and officials on the ground and using traditional, non-GMO methods to breed additional nutrients into staples that are already consumed in the countries in question, including beans, corn, wheat, sweet potato, and millet.

“We’re really focused on protein to begin with, because there’s a great piece of research that shows over the years, as the yield of soy beans has increased, we’ve seen protein decrease,” says Anthony Kingsley, director of impact, environmental, and social governance at Benson Hill. “We’ve been really focused on this nutrient content piece, because we are strong believers that we can help buffer some of the worst effects of climate change and support climate mitigation and adaptation, while helping to maintain nutritious diets.”

But there’s room for other approaches as well, especially those focused on biodiversity, Kingsley says. This is WhatIF Foods’ specialty. The Singapore startup is focused on bringing forgotten crops cultivated prior to the world wars to mass markets, with a current emphasis on mooring, lupine, and the Bambara groundnut, a legume similar to peanuts.

Bambara in particular has proven to be an excellent crop, according to Lim, with more protein than soybeans and a better nutritional profile. But because it’s so hard to shell and process, he said, it never really caught on as a mass-produced crop outside its native range in Africa.

Vancouver-based Farafena takes a similar approach, working to commercialize Fonio, a grain that is naturally gluten free and high in protein and fiber, can be milled into flour and requires no irrigation or fertilizer to grow.

The company started out looking for ways to showcase foods and crops from Africa, according to Oumar Barou Togola, founder and CEO of Farafena. Fonio has been cultivated for a thousand years in his native Mali, but outside the country almost no one has heard of it. Over time, he says, the company became increasingly focused on nutrition, sustainability and climate justice. While they originally worked to expand their reach in North America and Europe, Togola says, Farafena is currently emphasizing increased accessibility to fonio in Africa.

“It’s not about growing one crop and getting a good yield,” he says. “We have to start going back and thinking, what did people do in the past? Because mass producing food and exploiting it globally is going to have a negative effect, in my opinion.”

“It’s not about growing one crop and getting a good yield,” he says. “We have to start going back and thinking, what did people do in the past? Because mass producing food and exploiting it globally is going to have a negative effect, in my opinion.”

Farafena’s story also highlights the delicate balance of introducing new, nutritionally-enhanced staples to the market. Difficult as they are to find for consumers in high-income countries — HarvestPlus partners with Professor Torbert’s Orange Corn, WhatIF Foods sells BamNut Noodles and will launch Bambara Milk next year — it can be even more difficult to keep them where they are needed. Small farms in Africa will often sell their best products, such as higher-protein corn, to higher-paying markets in North America and Europe, Birol says, leaving the lower-quality products for consumers at home.

Birol doesn’t discourage buying these products where available; the more widespread the consumption, she says, the more likely they’ll be widely adopted and distributed. But what is really needed more than individual change, she says, is collective action to change agricultural standards and practices the world over.

“Our aim is for breeding for nutrients to become the new normal,” she says, “so that ten years from now we don’t have to worry about nutrition.”

RELATED: 20 Under 20: Meet the Youth Climate Activists Saving the Planet