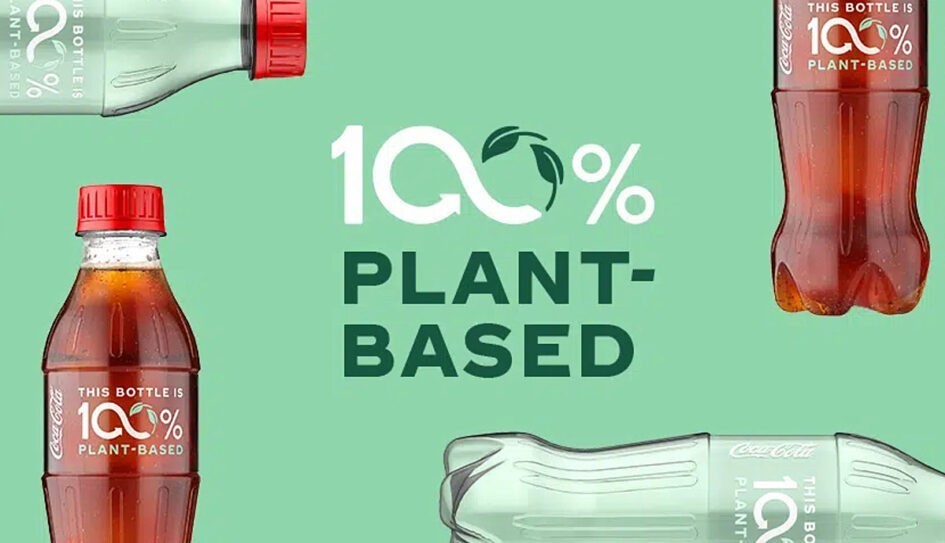 After four years ranking as the world’s worst corporate plastic polluter, the Coca-Cola Company announced a brand new plant-based plastic bottle to curb waste. The worldwide beverage company provides millions of consumers with its soda products, producing a massive carbon footprint attributed to plastic production and its subsequent waste. The plant-based plastic bottle marks a significant step in the company’s journey to raising its sustainability standards across its supply chain.

The prototype vegan plastic is made from paraxylene (bPX) – a material created in partnership with the plant-based plastic company Virent. The company developed the new bPX material with sugar from corn. The two companies work to convert the bPX into a plant-based terephthalic acid (bPTA), which will be the core of the new plant-based plastic used for Coca-Cola’s signature bottles.

The company announced that the new bottle will be completely plant-based, but the bottle cap and label will continue using traditional plastic until further notice. Coca-Cola is preparing to scale up plant-based plastic production commercially, providing the world with one of the most sustainable large-scale soda bottles to date.

���We have been working with technology partners for many years to develop the right technologies to create a bottle with 100 percent plant-based content—aiming for the lowest possible carbon footprint,” Chief Technical and Innovation Officer at Coca-Cola Nancy Qua said. “And it’s exciting that we have reached a point where these technologies exist and can be scaled by participants in the value chain.”

Nearly a decade prior, Coca-Cola introduced its first recyclable PET plastic bottle with its PlantBottle design. The PlantBottle only used 30 percent plant-based materials, and its limited run only saw 900 bottles produced and distributed in 2009 alone. Since then, the company has remained under heavy fire from environmental activists that believe the beverage giant is falling behind current sustainability standards.

The company revealed that every day more than 1.9 billion servings of its drinks get consumed across 200 countries. The widespread Coca-Cola consumption shines a light on the amount of plastic needed to produce in order to keep up with consumer demand, necessitating the development of a sustainable alternative to traditional plastic bottling.

“Our goal is to develop sustainable solutions for the entire industry. We want other companies to join us and move forward, collectively. We don’t see renewable or recycled content as areas where we want a competitive advantage,” Coca-Cola’s Global R&D Director for Packaging and Sustainability Dana Breed said.

Recently, the anti-plastic initiative Break Free From Plastic just released a report that tracked the world’s biggest corporations to determine the worst polluters. The report analyzed the plastic production and waste of more than 440 brands across six continents. The campaign also collected more than 330,000 pieces of plastic pollution. The end of the report named Coca-Cola as the planet’s biggest polluter for the fourth consecutive year.

The company announced in 2018 that it pledge to reverse its waste and carbon footprint, claiming that it would collect one bottle for every one sold. The campaign found that the company’s efforts had little to no impact as Coca-Cola remained as the world’s top corporate polluter. The report explains that 69 of the 100 largest economies in the world are companies rather than countries. Coca-Cola’s delayed decision is still welcomed as a significant stride towards sustainability for international corporations.

“Plastic is a significant contributor to the climate crisis. If plastic’s life cycle were a country, it would be the fifth-largest emitter of greenhouse gases in the world,” the report reads. “Even more concerning, left unchecked, plastic production is expected to double within the next 20 years. Corporate actors must lead the way to a plastic-free and climate-safe future because they have the power, the means, and resources to transform this vision into reality.”