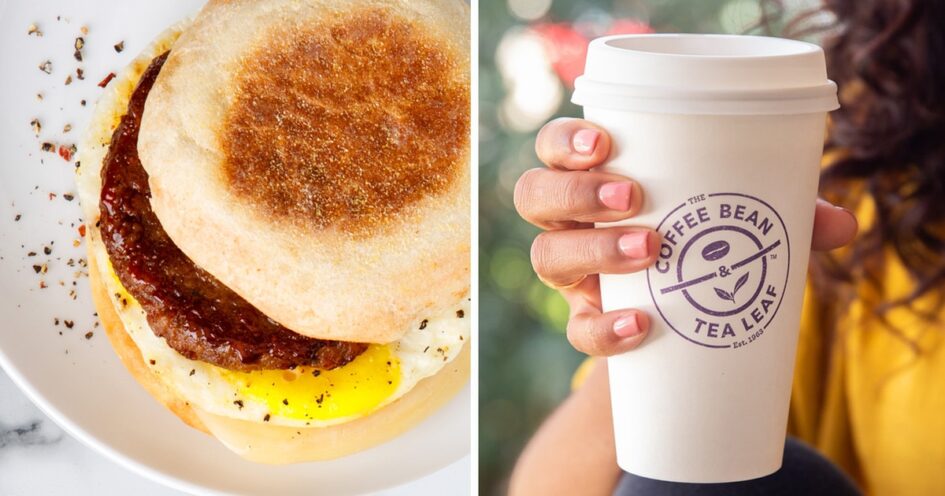 Today, Los Angeles-based chain The Coffee Bean & Tea Leaf is adding its first vegan meat option to its menu. Available at 122 Coffee Bean & Tea Leaf locations in California, the new Beyond Breakfast Sausage Sandwich features a vegan breakfast sausage patty (made by fellow California-based company Beyond Meat) along with dairy-based cheese and a chicken egg on an English muffin. The Beyond Breakfast Sausage Sandwich—which was first tested at select San Diego locations—is not made to order and therefore cannot be ordered vegan.

“As two SoCal-based companies, we’re excited to partner to bring our fans a delicious and convenient breakfast option made with plant-based sausage,” Tim Smith, Beyond Meat’s Vice President of Food Service North America, said. “Following the successful test in San Diego, we’re proud that Coffee Bean & Tea Leaf is expanding the Beyond Breakfast Sausage Sandwich to stores across California so that it’s easier than ever for consumers on-the-go to enjoy the nutritional and environmental benefits of plant-based protein.” “Our mission is to continue to drive innovation and to provide our guests with flavors and food items that they crave, enjoy, and that spark joy,” Nurit Raich, Senior Director of Product Innovation at The Coffee Bean & Tea Leaf brand, said. “We are excited to provide our guests with the Beyond Breakfast Sausage Sandwich that is made with delicious plant-based sausage as a way for them to easily enjoy plant-based meat without sacrificing on taste, and to bring back the indulgent Cookie Butter beverages by popular demand and other fall nostalgic flavors.” Dunkin’, Jamba, and Starbucks put vegan meat on the menu

Coffee Bean & Tea Leaf is the latest chain to add a vegan meat option to its menu. In 2019, Dunkin’ was one of the first coffee chains to add vegan meat to its national menu when it partnered with Beyond Meat to launch its first plant-based meat option at its more than 9,000 locations. There, the Beyond Sausage Sandwich was made on a vegan English muffin and featured Beyond Meat’s plant-based sausage patty served with an egg and dairy-based cheese.

To order that sandwich vegan, customers had to remove the egg and cheese, leaving behind only the Beyond Breakfast Sausage and English muffin—a sandwich that was easy to make at home as both items are widely available in grocery stores. As of July 2021, Dunkin’ reduced the availability of the sandwich to several hundred locations in California, Arizona, New Mexico, Colorado, Missouri, Nebraska, Hawaii, Utah, Kansas, and Wyoming. Dunkin’ is currently exploring other opportunities with Beyond Meat.

In April, smoothie chain Jamba got into plant-based meat with the addition of the Impossible Handwich to the permanent breakfast menu at its 725 locations nationwide. The sandwich features a plant-based Impossible Sausage patty and is served with dairy cheese on a toasted sprouted vegan grain bun. This sandwich can be ordered vegan by omitting cheese. Coffee giant Starbucks has also begun to adapt to modern appetites. In June 2020, Starbucks added the Impossible Breakfast Sandwich to the majority of its locations nationwide—representing the first time the chain has offered plant-based meat on its menu in the United States. This sandwich features a plant-based Impossible Sausage patty, dairy cheese, and chicken eggs, and cannot be ordered vegan as the sandwiches at Starbucks, like those at Coffee Bean & Tea Leaf, are not made to order.

While the fate of the fully vegan breakfast sandwich at Starbucks is unknown, other chains have launched tantalizing options to meet demand for vegan sandwiches. Last spring, Peet’s Coffee added the fully vegan Everything Plant-Based Sandwich to its menu at participating locations nationwide. The new sandwich is made with a Beyond Meat Breakfast Sausage patty, folded JUST Egg, melted dairy-free cheddar cheese, and comes served on an everything bagel thin.