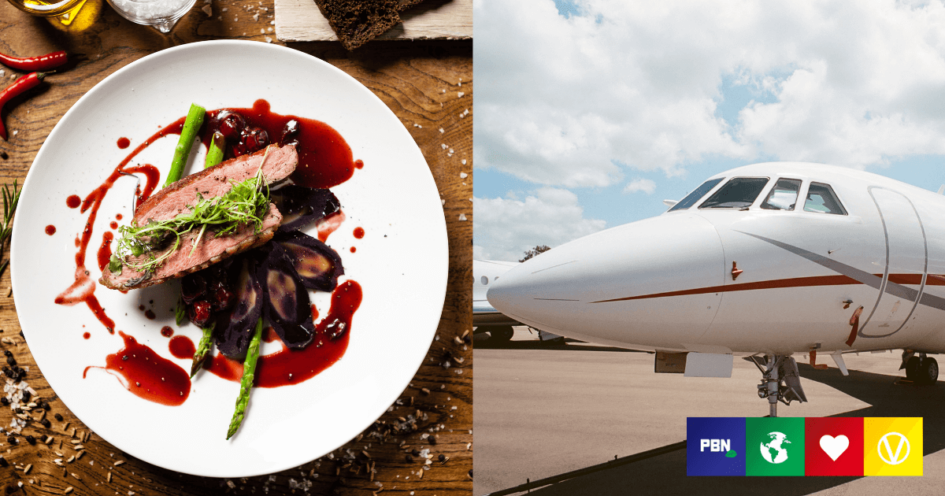 The UN’s global climate change conference kicked off on October 31, with world leaders from 200 countries and 20,000 delegates gathering in Glasgow to tackle the climate emergency. Some have billed the conference as “the world’s last chance” to prevent the most disastrous effects of the climate crisis.

However, accusations of hypocrisy and greenwashing have been leveled against the summit,
with critics claiming it to be little more than a PR exercise.

The agenda fails to address agriculture’s impact on the planet

Back in August, 53 NGOs wrote to British politicians and COP26 president Alok Sharma, urging
them to put animal agriculture at the heart of the agenda.

But the pleas appear to have fallen on deaf ears — the Vegan Society revealed that while there
are around 30 talks in favor of the meat and dairy industries, only one pro-plant-based panel
explores a future food system that doesn’t include the use of animals.

Scientific research shows that animal agriculture is responsible for 14.5 – 16.5 percent of
human-made greenhouse gas emissions — greater than all transportation combined.

Accordingly, campaigners have warned leaders at COP26 that plans to halt climate breakdown will
inevitably fail if they don’t prioritize the reform of our food systems.

Ali Tabrizi, the filmmaker behind the documentary Seaspiracy, raised his concerns last week.

“Did you know that just FIVE of the largest meat and dairy producers emit more emissions than the oil giant Exxon? Or that Bottom Trawling releases at least as much CO2 emissions as all air travel combined? However, not once in the entire history of COP have they seriously addressed animal
agriculture or the fishing industry,” he said.

The menu is damaging to the environment

COP26’s menu heavily features meat and dairy, despite the scientific evidence showing that animal farming is the second biggest source of greenhouse emissions. In response, environmentalists called on the conference to serve only vegan food.

The summit’s website describes its menu as “plant-forward” and acknowledges that: “plant-
based food is one of the most effective ways to reduce emissions.”

But is COP26 guilty of bluewashing its menu?

The meals on offer include a wide selection of climate-destructive food, including beef, which
scientists repeatedly identify as one of the most harmful foods to produce.

The beef burger has had its meat content reduced, bringing its carbon footprint down. But with a carbon emission of 3.3kg per burger, that’s still over 16 times more carbon than the plant-based alternative burger on the menu.

Unsurprisingly, many have questioned the inclusion of meat on the menu.

“Would you imagine going to a cancer conference and giving cigarettes at the door? It wouldn’t make any sense!” Bernat Añaños, co-founder of European plant-based meat giant Heura Foods, told the conference.

Andrew Graham-Stewart, director of the Salmon and Trout Conservation, has also questioned the inclusion of salmon on the menu. “It is, by any reasonable set of criteria, unsustainable, and to include farmed salmon on the COP26 menu is beggars belief,” he told The Big Issue.

The lowest-carbon options were those that were entirely plant-based. For example, the Pearl Barley & Root Vegetable Hot Pot generated just 0.1kg of carbon per serving.

About 400 private jets flew into Glasgow for the climate talks, emitting as much CO2 as 1,600
Scottish people do in a whole year.

Jeff Bezos, Prince Charles, Joe Biden, and Boris Johnson were among those criticized for their
choice of transport.

“The average private jet … emits two tons of CO2 for every hour in flight. It can’t be stressed
enough how bad private jets are for the environment; it is the worst way to travel by miles,” Matt
Finch from the Transport and Environment campaign group commented.

Private jets are ten times more carbon-intensive than airliners on average, and 50 times more
polluting than trains. Furthermore, one percent of people cause 50 percent of global aviation
emissions through private jets.

Further accusations of hypocrisy came after Johnson flew out of the summit on a private
jet to attend a dinner with a climate skeptic journalist, a journey that could’ve been done in four
and a half hours by train.

“When it comes to tackling climate change, words without action, without deeds are pointless,” he told leaders of developing nations earlier in the week. Johnson’s spokesperson defended the flight, saying the plane ran partly on “sustainable aviation fuel,” but experts have dismissed the claim as industry greenwashing.

Climate scientists have repeatedly warned that methane plays an ever-greater role in rising
global temperatures, arguing that cutting these emissions is the best opportunity to slow heating
over the next 25 years. In response, 105 countries signed up to cut methane emissions by 30 percent by 2030.

The initiative aims to reduce methane leaks from new and existing oil and gas pipelines, but
plans fail to tackle the meat and dairy corporations responsible for the biggest emissions. Livestock emissions account for roughly 32 percent of human-caused methane. As such, UNEP Food Systems and Agriculture Advisor James Lomax says the world needs to be “rethinking our approaches to agricultural cultivation and livestock production” to slash greenhouse gas emissions.

Another landmark pledge saw almost 100 countries sign up to begin restoring the world’s
forests by 2030.

However, some advocacy groups say the deal allows deforestation to continue. “It allows another decade of forest destruction and isn’t binding. Meanwhile, the Amazon is already on the brink and can’t survive years more deforestation,” Carolina Pasquali of Greenpeace Brazil commented.

Questions remain over how global leaders at COP26 are planning to tackle the devastating
effects of animal agriculture on the planet’s forests.

Opportunities have been missed

Analysis by the Energy Transition Commission shows that plans made in week one of the
conference would only amount to 40 percent of the emissions cuts needed by 2030 to avoid the
most dangerous effects of the climate emergency. And that’s if all the agreements are all fully delivered.

If COP26 is to succeed, food and agriculture will need to be added to the agenda. Otherwise,
the global summit will be yet another missed opportunity.