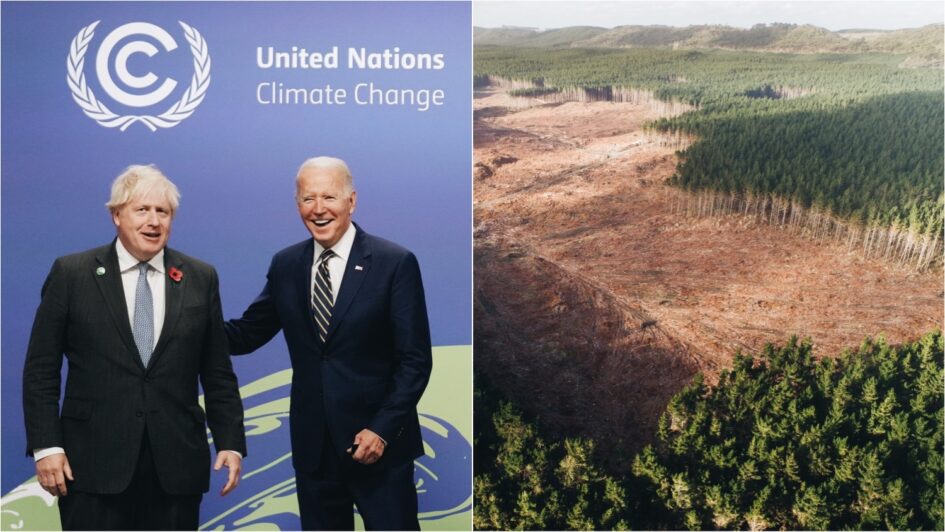 More than 100 world leaders just agreed to end and reverse deforestation by 2030. The pledge to tackle deforestation took place at the 26th Conference of the Parties, or COP26, the United Nations’ annual climate change summit.

Nearly 120 world leaders converged in Glasgow on October 31 for the 12-day climate conference, which was hosted by the U.K. Prime Minister Boris Johnson. The goal of this year’s summit was to agree on new measures to reduce greenhouse gas emissions in line with the Paris Agreement.

Forests are especially important in mitigating the climate crisis because they are natural carbon sinks and the decimation of forests is driving global warming. According to environmental advocacy nonprofit Environmental Defense Fund, tropical deforestation contributes to about 20 percent of all annual emissions.

“We have to stop the devastating loss of our forests,” Johnson said. He added that countries need to “end the role of humanity as nature’s conqueror, and instead become nature’s custodian.”

Countries that agreed to the pledge represented more than 85 percent of the world’s forests, including Canada, Indonesia, Russia, Colombia, the Democratic Republic of Congo, and Brazil. The latter of which is home to the Amazon, the world’s tropical rainforest, which is being ravaged by deforestation largely driven by cattle ranching. Approximately 15 percent of the Amazon has been destroyed in the past 30 years, according to environmental group Greenpeace.

The pledge to end deforestation includes $19.2 billion in funding, a portion of which will go towards reforestation efforts in developing countries. A nearly $1.5 billion fund will be established to protect the Congo Basin, the world’s second largest tropical rainforest. Twenty-eight countries also agreed to end deforestation in the global trade of food and agricultural products like soya, palm oil, and cocoa.

Scientists and experts have warned that world leaders must follow through with their commitments. A previous pledge in 2014 “failed to slow deforestation at all,” the BBC reports.

COP26 tackles deforestation and other issues

COP26 also saw a slew of other pledges aimed at addressing the issue of climate change.

A total of 105 world leaders, including the Biden administration, signed the Global Methane Pledge. The joint initiative between the U.S. and the EU aims to reduce methane emissions by 30 percent by 2030.  According to the United Nations, methane ​​has more than 84 to 86 times the warming power over a span of 20 years, compared to carbon dioxide. While methane is emitted from natural sources like wetlands, human activity is also to blame. Waste disposal, the production of fossil fuels, and agriculture, namely cattle, are also top emitters.

“One of the most important things we can do in this decisive decade is reduce our methane emissions as quickly as possible,” Biden said, adding that methane is “one of the most potent greenhouse gases there is.”

More than 40 world leaders also agreed to embrace green technology in five carbon-polluting sectors, including electricity and agriculture.India’s Prime Minister, Narendra Modi, tackled emissions head-on. He announced an ambitious pledge to become carbon neutral by 2070. “Departing from Glasgow after two days of intense discussions about the future of our planet,” Modi said. “India has not only exceeded the Paris commitments but has now also set an ambitious agenda for the next 50 years.”

Our Challenge to World Leaders on Climate

Volvo Is Ditching Leather by 2030