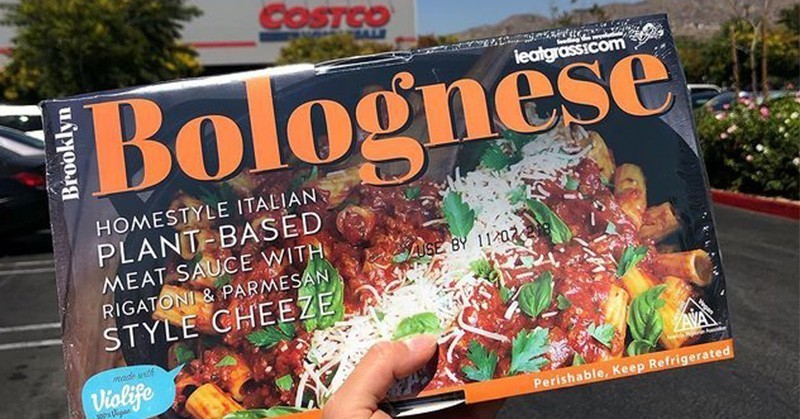 Costco is becoming more and more vegan friendly, and we’re here for it. The prepared foods section just got another vegan upgrade, because Costco just launched ready-to-eat vegan bolognese!

The pasta is heat-and-serve and is made with rigatoni, a bolognese sauce made with vegan beef, herbs, and tomatoes, and topped with Violife parmesan cheese. This Costco vegan pasta comes in a 32oz container and can be found in the prepared foods section of the store for $9.99.

The pasta—called Brooklyn Bolognese—is made by vegan chef Ayinde Howell and is a recipe he’s been perfecting since he was 19 years old and living in Brooklyn. The dish is an ode to the flavors and time he spent in Brooklyn, and the low price point reflects how eating a quality vegan meal doesn’t have to be expensive.

Currently, the Brooklyn Bolognese is only available in Costco locations in California and Hawaii, but be on the lookout for further expansion plans. Hawaii residents can find the pre-made pasta at the Kona, Maui, Waipio, Kapolei, Hawaii Kai, Iwilei, and Kauai Costco locations. Southern California residents can find the pasta at forty-six locations, from San Luis Obispo and Goleta to Palm Springs and the Inland Empire. Many of the locations carrying the dish are concentrated throughout Los Angeles and Orange Counties.

This isn’t the first dish of Ayinde’s that Costco has picked up. The retailer brought in Ayinde’s take-and-bake Jalapeno & Cheddar Mac & Yease earlier this year for a similar trial run in California and Hawaii, and the brand’s Original Mac & Yease enjoyed a major launch at Costcos across the Southeastern states last month.

Make sure to check out @costco on Instagram to see what vegan options are at your local Costco, and give Chef Ayinde a follow @ayinde for updates on this launch and all future recipe releases!