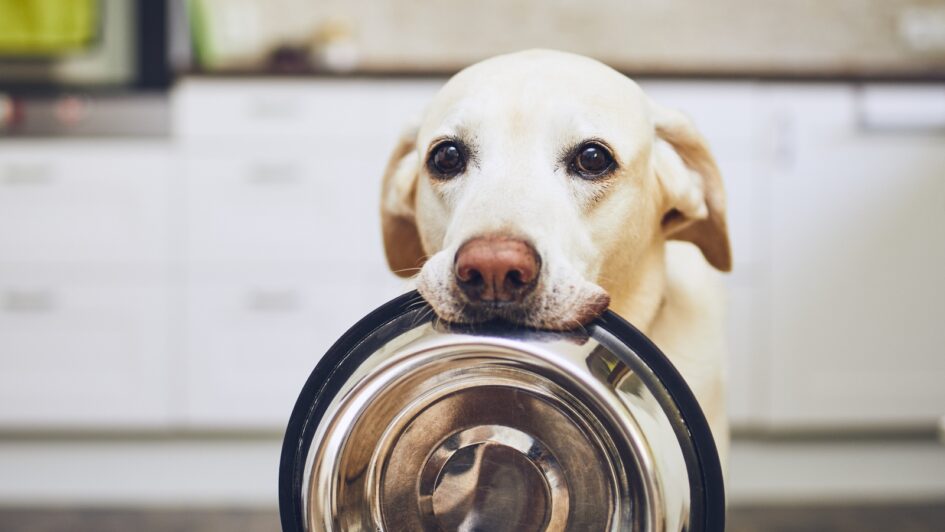 The day my border collie Levi celebrated his 9th birthday was the day I really started thinking about his age. Of course, most people fear the day their companion animals ‘go to live on a farm’ – you know, permanently. But it’s a thought you force back down for most of your pup’s life.

But when Levi embarked (get it?) upon his ninth year of life, I couldn’t keep it down any longer. I knew he wasn’t in perfect health. He had early arthritis and was being treated for infections in both ears. He had less energy than he used to, and no longer jumped up into the car or onto the bed.

I was doing my best to give him a great and healthy life. But I was aware that a lot of dogs don’t make it past 10-12. And I was eager (or desperate?) to find new ways to increase the likelihood of him living longer.

Nights of research kept leading me back to a concept I’d always doubted and judged: a vegan diet for dogs. I’m vegan myself, but never considered forcing that onto Levi. Like most pet owners, I only want what’s best for him. But suddenly, I was reading about the health risks of feeding meat to your dog, not the other way around.

I’m not here to convince you to change your dog’s diet to a plant-based one. What I will do though, is share some of the information I found useful when exploring this topic further.

Can dogs be vegan?

Whether dogs can be vegan is a contentious topic. At a first glance, it’s easy to mistake dogs for carnivores – the teeth, for starters, are misleading. But domestic dogs are actually omnivores, like humans, chimps, bears, and pigs (to name a few).

An omnivore is an animal that can survive on both plant- and animal-based foods. For this reason, like many other omnivores, dogs can eat an entirely plant-based diet.

Benefits of a plant-based diet for dogs

It didn’t take long to see the improvements in Levi once he transitioned away from commercial meat-based kibble and toward a vegan formula. It’s been more than 2 years, and he is healthier than he’s ever been. He hasn’t had issues with infections since he was eating meat, and his arthritis symptoms have significantly improved – jumping into cars, onto beds, and all over people. At 11 years old, he gets mistaken for a young dog all the time.

It’s a story that I’ve heard many times, especially on a Facebook group called Vegan Dog Nutrition, which has more than 17,000 members. Of course, anecdotal evidence isn’t enough. But these testimonies are backed up by research, too.

It clarified that pets on a meat-free diet can still develop health problems. “However, such diseases are also prevalent within the normal domesticated companion animal population,” the research said.

A separate study, from 2009, looked at the diets of highly exercised dogs to determine whether they could remain in good health on a meat-free diet. The experiment involved sprint-racing Siberian huskies and lasted 16 weeks, including 10 weeks of competitive racing. The dogs on a plant-based diet remained in ‘excellent physical condition’.

Dr. Debra Voulgaris, who has a Doctorate of Veterinary Medicine (DVM), has used plant-based diets to help pet patients manage harmful health conditions. “As an ethical veterinarian, I have a responsibility to recommend foods for my patients that are balanced and healthy. As an ethical vegan, I have a responsibility to promote compassion to all animals, not just my patients. V-dog allows me to do both,” she says, referring to a plant-based dog food brand.

“V-dog has proven to be effective in helping many of my patients manage certain allergies, gastrointestinal issues and other systemic illnesses.”

Dr. Jena Questen, who has her own animal rescue and vet hospital, also advocates for meat-free dog diets. She has stated: “Why do I support a vegan diet for dogs? Because the science is clear: 1) Humans and dogs are both omnivores. 2) A plant based diet is the best diet for health and longevity for humans. And 3) I want my animals to live as long, and healthy, as possible, therefore a plant based diet is what I feed and recommend, with tremendous results!”

You can’t talk about vegan dogs without mentioning the iconic border collie, Bramble. Bramble lived to just over 25 years – the equivalent of 189 in dog years. She even held the Guinness World Record for being the world’s oldest dog at the time.

Bramble’s owner, animal rights activist Anne Heritage, spoke with V-Dog about Bramble and her other pups.

“I’ve had seven dogs – three of them lived to 19 years old, one lived to 20 years old, and then Bramble lived to 25 years old,” she said. All of them were vegan.

“I was really able to enjoy my dogs much longer – we were able to enjoy each other – due to their plant-based diet. I believe you can extend your dog’s years given the right care plan and food,” she said.

“[Bramble] walked over two hours daily. All of this activity really built up her muscles and endurance. Bramble’s vet also said she had the best teeth she’s ever seen. Her teeth were white and strong.” (Interestingly, many vets have said that about Levi’s teeth too, but I can’t say whether that’s due to his diet).

Learning about the (many) health implications of meat-based dog food was the catalyst for me to make the change for Levi.

It’s also what motivated some plant-based pet food brands to launch. Take Wild Earth, for instance. The company launched, in part, due to concerns about contaminated dog food.

“Most of the major brands have meat scraps from the ‘4D animals’—dead, dying, diseased, or disabled—so there could really be anything in there,” CEO and co-founder Ryan Bethencourt told Wall Street Journal. Raw 4-D meat, according to the FDA, ‘may present a potential health hazard to the animals that consume it and to the people who handle it’.

Bethencourt continued: “We’ve taken an easily accessible vegan product that we can easily scale through biotechnology, not factory farming.”

Another meat-free pet food brand, V-Dog, has similar concerns. On its website, it points to data from the American Veterinary Medical Foundation, which shows that in February 2018 alone, 38 pet food products were recalled for contamination, mostly from pentobarbital (a euthanasia drug) and Salmonella contamination.

Multiple popular dog food brands were among those recalled. These included ​​Ol’ Roy, Skippy, and Gravy Train, which is owned by $14.34 billion manufacturer Smucker’s.

Researchers looked at 55 samples from 25 brands (most of which ship worldwide). More than half (54 percent) of samples contained the bacteria. And more than 40 percent were resistant to multiple antibiotics.

The findings posed risks, not just to the dogs consuming it but to humans, too. “The close contact of humans with dogs and the commercialisation of the studied brands in different countries poses an international public health risk,” said study researcher Dr Ana R. Freitas.

“European authorities must raise awareness about the potential health risks when feeding raw diets to pets and the manufacture of dog food, including ingredient selection and hygiene practices, must be reviewed.”

Stepping away from bacterial concerns, there are other ways using animals for pet food can be harmful. Former employees in the pet food industry have revealed that plastic ear tags from livestock can be processed along with the meat and ultimately, end up in dogs’ bowls. Spoiled supermarket meat can also be used in batches, sometimes without removing the styrofoam packaging.

Some employees spoke to ABC about the issue. A former rendering plant operations manager revealed: “There would be plastic. Butchers would be getting rid of their material and they don’t care what they’re putting in the bin — plastic, cans, all those sorts of things you would see.”

Of course, a lot of variables are at play. But an undeniable one is diet. The production of meat, dairy, and eggs is a leading driver of deforestation, ocean dead zones, and rising sea levels. Animal products (especially beef) are huge generators of greenhouse gas emissions. And research has shown over and over again that plant-based foods have a lower impact on the planet.

In 2019, researchers from Oxford University analyzed the impact of the food system on the planet. The study was the most comprehensive of its kind to date. Joseph Poore, who led the study, concluded: “A vegan diet is probably the single biggest way to reduce your impact on planet Earth, not just greenhouse gases, but global acidification, eutrophication, land use and water use.”

“It is far bigger than cutting down on your flights or buying an electric car,” he said, since these avenues mostly target greenhouse gas emissions. Agriculture is a sector that spans all the multitude of environmental problems. Really it is animal products that are responsible for so much of this.

Venezuelan surgeon and veterinarian Dr. Simon Fit believes it is our ‘duty’ to work toward minimizing our pets’ environmental impact.

He said: “I also think that it is a duty of all of us who love animals and the planet to minimize the suffering of others and reduce the environmental impact that we produce with our food. The food that our dogs and cats consume produces more than 64 million tons of carbon dioxide a year – that’s the equivalent of driving more than 13 million cars.”

Vegan dogs are a minority, but a growing one.

In 2019, researchers from U of G’s Ontario Veterinary College conducted a survey to examine what foods people are feeding their pets.

Just under six percent of participants were vegan. More than a quarter (27 percent) were feeding their dogs a plant-based diet, too. Among the rest of the vegan survey respondents, 78 percent were interested in adjusting their pets diet to be plant-based if it met their needs

Lead author Dr. Sarah Dodd commented: “That percentage, 27 percent, might sound like a small number, but when you think of the actual numbers of pets involved, that’s huge, and much higher than we expected.”

Moreover, 35 percent of pet owners whose companion animals currently ate meat were interested in switching their pets’ diet to a plant-based one.

“People have been hearing about how vegan diets are linked to lowered risks of cancer and other health benefits in humans. There is also growing concern about the environmental impact of animal agriculture,” Dodd said.

“Previous studies have also shown that pet owners tend to offer the same kind of diets to their dogs and cats that they adopt for themselves. So, while only a small proportion of pet owners are currently feeding plant-based diets to their pets, it is safe to say that interest in the diets is likely to grow.”

If you’re interested in knowing more, see here for some information on vegan dog food brands