Could Liquid Mozzarella Solve the Age-Old Problem with Vegan Cheese? 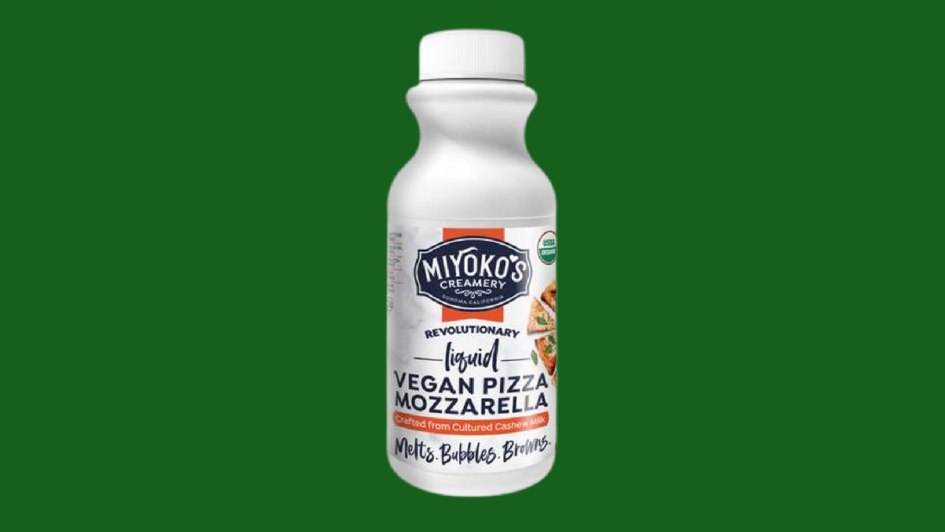 Vegan cheese has come a long way over the years, but even the best of the bunch still can’t quite capture the melty, stretchy, burbly quality of dairy cheeses. Until now. Miyoko’s Creamery is set to revolutionize your pizza and casserole game with their latest innovation: liquid vegan mozzarella cheese.

The liquid vegan mozzarella comes in a small, pourable jar you might mistake for coffee creamer. Inside is a thick, cultured cashew milk-based product that can slide onto your desired food; heat transforms it into a melty, gooey dream. Why does liquid cheese produce a better result? The ingredients that make a block of vegan mozzarella hold its solid shape hinder meltability. On shreds, anti-caking agents that keep the bits from sticking to each other do the same. Here, all those extra ingredients have been removed, leaving just the cheesy goop.

And while liquid cheese might sound like a science-food, the ingredients list is all wholesome basics – just eight ingredients, including cashews, sunflower seeds, mushrooms, salt, tapioca starch, konjac, and cultures.

“We know that Americans eat about three billion pizza pies annually and are excited to share a vegan cheese solution like nothing anyone’s ever seen before,” Miyoko Schinner, founder and CEO of Miyoko’s Creamery, said in a press statement announcing the new product. “Our Liquid Vegan Pizza Mozzarella has been praised by partnering pizza-makers because of its wonderful taste and ability to melt, bubble, and brown.  It is now available for pizza lovers across the U.S. to bring home.”

According to the company’s research, nearly 80 percent of dairy cheese production in the U.S. is mozzarella, most of it going to feed our insatiable hunger for pizza. This liquid vegan mozzarella generates an estimated 98 percent less greenhouse emissions per unit compared to the conventional stuff.

To try it for yourself, you’ll have to order from the Miyoko’s Creamery website for now. On October 18, it will start arriving on shelves at Sprouts grocery store locations nationwide, followed by a larger roll out in January, 2022. If you’re in Boston, New York City, Philadelphia, or Richmond this month, you may be able to get an advance taste from a mobile Miyoko’s pizza truck popping up in those cities.

RELATED: Miyoko Schinner on Indulgence, ‘The Vegan Meat Cookbook’ and the Meal that Changed Her Life

The 2 Best Vegan Feta Cheese Brands (+ Where to Find Them)