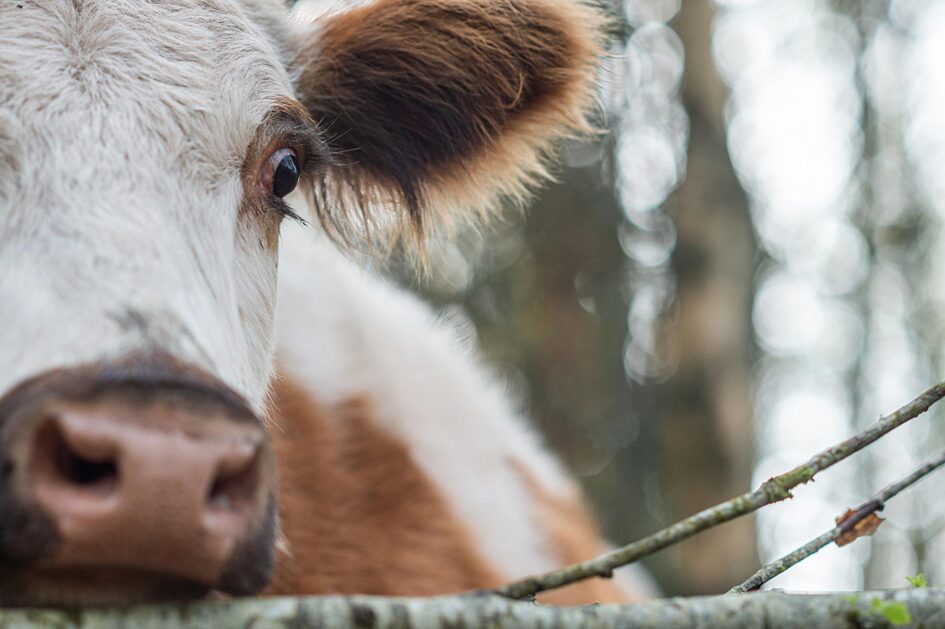 Farming cows is known to drive deforestation and climate change, whilst also causing emotional, physical and psychological suffering to sentient beings. But it happens only because people buy the meat and milk, which means there is something we can all do to reduce our impact on animals and the planet.

How Were Cows Domesticated?

Cows were domesticated around 10,500 years ago and have been exploited ever since for their flesh, skins, milk, reproductive abilities and labor. Their ancestors were aurochs, or wild oxen, who were taken from the wild and used for breeding.

What Is A Cow Farm Called?

There are several types of farms that exploit cows. ‘Dairy farms’ impregnate female cows so that they produce milk. ‘Beef farms’ impregnate females and slaughter their young for meat. These operations are often intensive, with cows kept either indoors or in overcrowded pens where they are unable to roam or graze. A ‘cattle ranch’ is a beef-producing operation that allows the cows to roam. Commonly, the free-roaming young are rounded up and sent to intensive units or ‘feedlots’ for fattening before slaughter.

Why Cow Farming Is Bad

Farming cows is bad for cows, bad for the planet and bad for people, too.

Mutilations are legal and commonplace on farms, and for cows can include branding, ear-tagging and dehorning. All are painful and almost always issued without anesthetic.

Whether it is their milk or their young we want, female cows are repeatedly artificially inseminated. They never get to keep their babies, and the separation of mother from calf can cause severe anguish for both. Cows and their young have been documented calling for one another for days.

Painful lameness is incredibly common on dairy farms and can be caused by an infection or by environmental factors, such as being forced to stand on hard floors or improper nutrition. Nine percent of ‘culled’ cows on dairy farms are slaughtered because they are lame.

As a result of their treatment, cows suffer severe physical and emotional stress. Confinement, an unnatural diet, repeated forced pregnancies and the loss of their young, mutilations, transportation, and exposure to pathogens cause unjustifiable stress for these sensitive animals.

No one gets out alive

The calves of dairy cows are slaughtered for veal or simply shot at birth if their bodies cannot be monetized in another way. Other calves are reared and slaughtered for beef. The adult females used for breeding beef cows or producing dairy are also slaughtered when their productivity declines.

Cow farming is a leading cause of deforestation. This is because it takes such a lot of land to produce beef and there is not sufficient agricultural land available, so forests are cut down to make more. This is one reason behind the devastating drop in wild animal populations.

Cow farming is responsible for large quantities of climate-changing gases, both from deforesting lands and also from methane from the animals themselves. At a time when we must drastically reduce our emissions, there is no place for animal farming, and especially for cow farming.

How Can You Help?

The best thing to do to help cows and the planet is to choose plant-based foods and end the support of the cow-farming industry. Thankfully, for most people, that is pretty easy to do. We can simply switch dairy milk for plant-based milks such as oat, soy or almond, and we can choose from the many tasty vegan meats available. These look, cook and taste like meat so we can get all the flavors we love with none of the downsides.

Cow farms cause unimaginable suffering whilst also contributing to some of the most serious environmental issues of our time. If we want to end the suffering of cows and their calves, reduce our climate impact and protect the world’s wild spaces and inhabitants, switching to a plant-based diet is the best thing we can do.