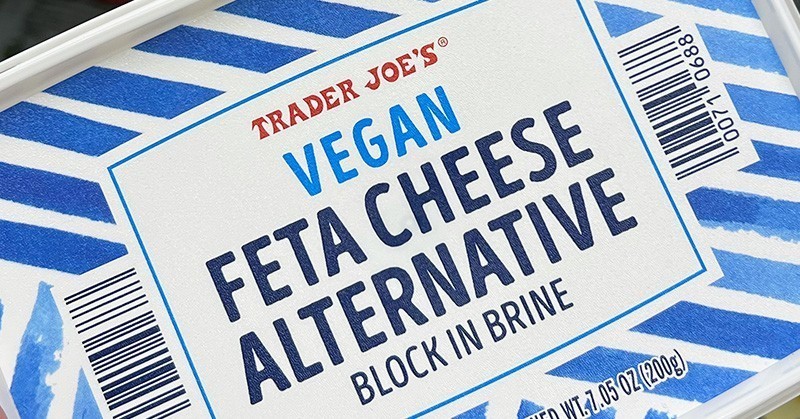 Cheese is one of those foods that delay most people from going fully vegan. Nowadays, many plant-based cheese alternatives exist, but a lot of them are expensive and hard to find. One of the rarest vegan cheeses? Feta! This season, Trader Joe’s launched vegan feta, and customers can’t get enough of it.

If you’ve gone grocery shopping recently, you may have noticed Trader Joe’s new Vegan Feta Cheese Alternative. The blue and white striped container can be found in the refrigerated section near the grocery store’s animal-based cheese products. The dairy-free feta block is made of coconut oil, potato protein, sea salt, and modified potato starch and is stored in sea salt brine. Each serving contains 80 calories, 8g fat, 3g carbs, and 0g sugar. Best of all, each 10.6oz container is just $4.99!

Best Vegan Feta on the Market

Since its launch earlier this month, Trader Joe’s vegan feta has been flying off the shelves, and customers have taken to social media with rave reviews. “Delicious and tastes like real feta,” @m.g_1129 said on Instagram. “TJ’s really coming out hard for us vegans lately. I love it,” u/nat_lite commented on Reddit. Some followers have even made recipe suggestions for the feta, such as Caprese salads, Greek salads, pasta, pizza, and more!

So, what does it taste like? Well, feta! Because Trader Joe’s is known for private-labeling mainstream products, superfans have theorized this new product might be Violife’s feta based on the ingredient list and manufacturing location.