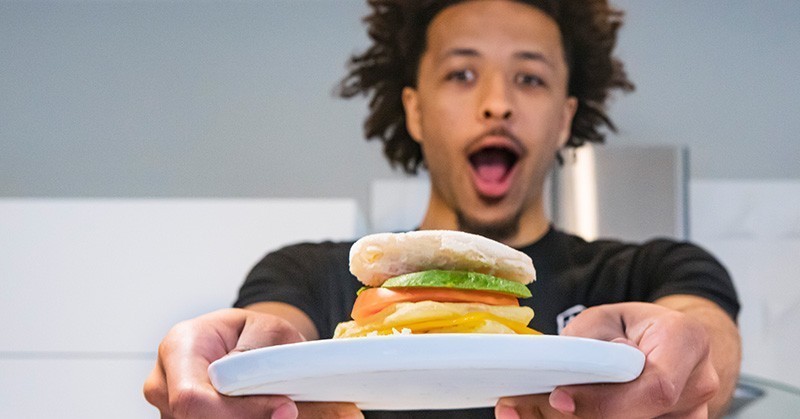 Cade Cunningham Is an Athlete Ambassador for Just Egg

In an interview with the ESPN broadcast crew earlier this year, Cunningham was asked about his vegan lifestyle. Cunningham explained that he made the decision to go vegan as a way to experiment with how his body would react to plant-based food. After taking a short break from veganism in 2019–Cunningham ate McDonald’s during a trip to Greece with Team USA during the FIBA World Cup—the basketball player quickly made the decision to go back to veganism, and it has stuck ever since.

Cunningham also became the athlete ambassador for Eat Just in August, which is the plant-based brand behind the popular mung bean-based vegan egg substitute JUST Egg.

Cunningham isn’t alone when it comes to living a vegan lifestyle in the NBA. In 2017, Brooklyn Nets player Kyrie Irving made the switch to a vegan diet and represented Beyond Meat as an ambassador during the company’s “Go Beyond” campaign, where he promoted their plant-based meats. DeAndre Jordan, a player for the Lakers who also went vegan, recently launched a vegan cooking show. In addition, NBA Hall of Famer Scottie Pippen has launched HUSK, his own line of plant-based popcorn.

The Cade Stack breakfast sandwich is available for $11 now through the first week of November at Folk Detroit, located at 1701 Trumbull Ave, Detroit, Michigan 48216.