Do Snails Feel Pain? Does Science Have The Answers? 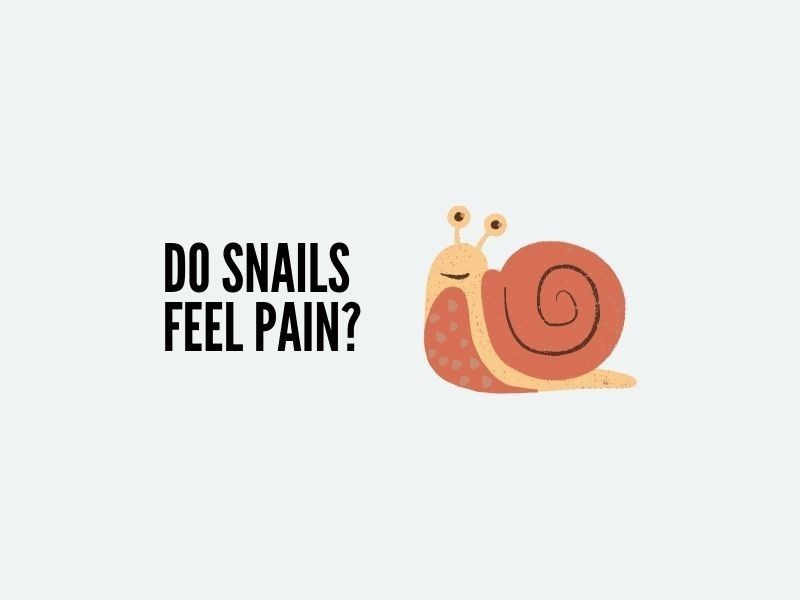 Have you ever wondered if snails feel pain?

Watching these little creatures crawl around your garden and munch on leaves might prompt this sort of question, especially if you are a peaceful sort of person that tries not to harm any living things.

So, how do snails respond to pain, and can they feel it?

Yes, it is believed that snails can feel pain, whether they are injured, or whether encounter a substance like salt that burns their skin. Snails respond to pain as other creatures do, and many people believe that they suffer in the same way that more complex animals appear to when they are hurt.

What Type of Pain Do Snails Feel?

Pain has a purpose in life: it prompts us to move away from the source of pain, which – usually – helps to prevent us from being further injured by whatever was inflicting the pain in the first place. This may be enough to get rid of the pain, or it may continue if a wound has been inflicted.

This sort of reaction to pain is usually referred to as nociception, and it just involves a reflexive response to something inflicting harm upon the organism. This response causes creatures to withdraw, even without any conscious thought.

Think about what happens if you touch a hot pan. You pull your hand away before you have consciously registered that you are getting burnt.

For animals without a nervous system and reasoning power (such as bacteria), it is thought that any “pain” that they feel serves only to trigger the movement promptly. This encourages them to move away from the source of danger, but it does not teach them anything about avoiding that source in the future.

Many scientists argue that this response is present in the “simpler” animals, such as snails, and that it is independent of brain function.

In more complex animals, however, pain can be a learning experience, and when it is coupled with the ability to reason – even on a minor level – it results in animals changing their behavior defaults to avoid the painful experience in the future.

Many people believe that snails are capable of feeling and dealing with this kind of pain. They have a nervous system that will send pain signals to the brain, and it’s possible that they can alter their behavior to avoid reproducing pain responses. How far they can reason is not yet clear, but they are at least aware of and responsive to pain beyond the basic trigger response.

It is worth noting that some scientists argue that a spine is essential to feel true pain in the way that humans feel it. The spine plays a large role in the processing of pain between the nerves and the brain, and it is argued that its presence indicates a much more complex and advanced response to pain.

However, many people feel that the explanation is insufficient and that because the animals do respond to injury, they can indeed feel pain, even if it is not identical to the experience we have when we hurt ourselves.

Overall, then it’s not totally clear what level snails feel pain on, but it is clear that they respond to and move away from injurious circumstances when they can.

Can We Prove That Snails Feel Pain?

Beyond circumstantial evidence, not really – at least, not yet. One day, science might be able to conclusively prove that snails do or do not feel pain when they are injured, but at present, all we can do is make assumptions based on their behavior and our observations of this species and others.

Many experts claim snails do not feel pain because they are simple, short-lived creatures. However, based on the ways snails behave, it seems likely that they can feel pain in some shape or form, and this belief is becoming gradually more accepted as time passes.

It is also a very logical belief. For animals, pain often results in survival, and lack of pain could result in death very easily, as the animal would not know to avoid something that was inflicting damage upon them. The pain response is strong and urgent, and all animals seem to respond to it on some level.

Therefore, it seems reasonable to assume that many or most animals have evolved the ability to feel pain because this ability keeps them safe and increases their chances of survival.

The basic rules of evolution would therefore make the pain response one that is likely to develop; animals that respond to injury quickly are more likely to survive.

How Can We Tell If Snails Feel Pain?

Beyond the logic that they probably can feel pain, what evidence do we have for this? It’s pretty much all circumstantial, but it’s similar to how we can tell other animals feel pain.

The most obvious way that most animals display pain is to yell (or grunt, howl, squeal, yelp, etc.) and move away from the source of the pain as quickly as possible.

Snails, obviously, are not capable of producing a sound in response to pain, but they do show clear evidence of moving away from pain when they can. It has been demonstrated that a snail will try to crawl away if you expose it to high temperatures or something sharp.

More importantly, there is anecdotal evidence to suggest that snails will also alter their route the next time they come into contact with the same area, avoiding the place that caused them pain initially.

This seems a good indication that snails feel and assess pain, and learn to avoid areas that have caused them pain in the past, although many scientists do not give them this level of credit.

Experiments done on hermit crabs (while different to snails, they do share some similarities) showed a quick response to electric shocks, in which the hermit crab attempted to move away or vacated its shell swiftly, possibly associating it with the pain.

Again, this isn’t conclusive proof that snails can feel pain, but it is quite likely that if other similar creatures have developed the pain response, snails will have done too. After all, there is no real logic to them not doing so; lack of pain has no evolutionary benefits and would often be actively harmful.

Is Salt Painful For Snails?

Salt is probably painful to snails, yes. Salt essentially dehydrates the snail by pulling all the moisture out of its skin. Remember, snails need damp conditions to survive because their skins are permeable and lose water easily. The salt removes the moisture from their bodies very quickly and they die.

Salt also prevents them from producing the slime that they use to move around, leaving them immobile and vulnerable to predators such as birds. If you salt a snail, it will not survive.

So, does salt actually hurt it? It’s hard to say for sure one way or another since we can’t ask the snail. However, being salted is likely painful, just as other harmful processes are painful.

If you are trying to avoid harming animals, the safest answer is to presume salt is painful for snails, because this assumption is reasonable, and there is not likely to be a clearer answer soon. While science is looking at pain processing in animals like snails, it’s a complex area and not a priority in many cases.

Again, it’s hard to know for sure, but, probably, snails do not experience the same degree of suffering as humans do when hurt. The emotional and cognitive ability of a snail is not as developed as that of humans, and therefore processing pain is likely to be very different for them.

We can’t know for sure how much a snail suffers when it is injured, but simply because the animal is less complex, it is reasonable to assume that its responses are not as complex as a person’s responses would be in the same circumstances. The snail is unlikely to experience pain the way a person would.

However, this is again something that science has yet to confirm. If you drop a snail in a vat of boiling water, would it suffer as much as a person? The truth is that, while we can make educated guesses, we just don’t know!

Snails are very different and it’s hard to measure their reactions to things effectively because they don’t show the same responses as humans and other vertebrates.

Overall, it seems pretty likely that snails can feel pain, although scientists are fairly divided on this subject and many still say that a snail’s response to injury is purely reactionary and not due to a sense of pain.

Limited testing and evidence taken from other animals indicate that some pain and learning are present even in simple animals, but further testing is needed to truly assess and understand a snail’s ability to feel pain.

Our #1 Recommendation For Vegans in 2021

Future Kind’s Essential Vitamins is our favorite vegan supplement. It’s not your typical multivitamin because it was specifically created for vegans by vegans. It contains the vital vitamin B12, vitamin D, and Omega-3 fatty acids (DHA & EPA). These ingredients are delivered in the right doses so that you never have to worry about a potential deficiency in the future. Read our review of the supplement to learn more about it.

Is Satin Vegan? Or Does It Comes From An Animal Source?