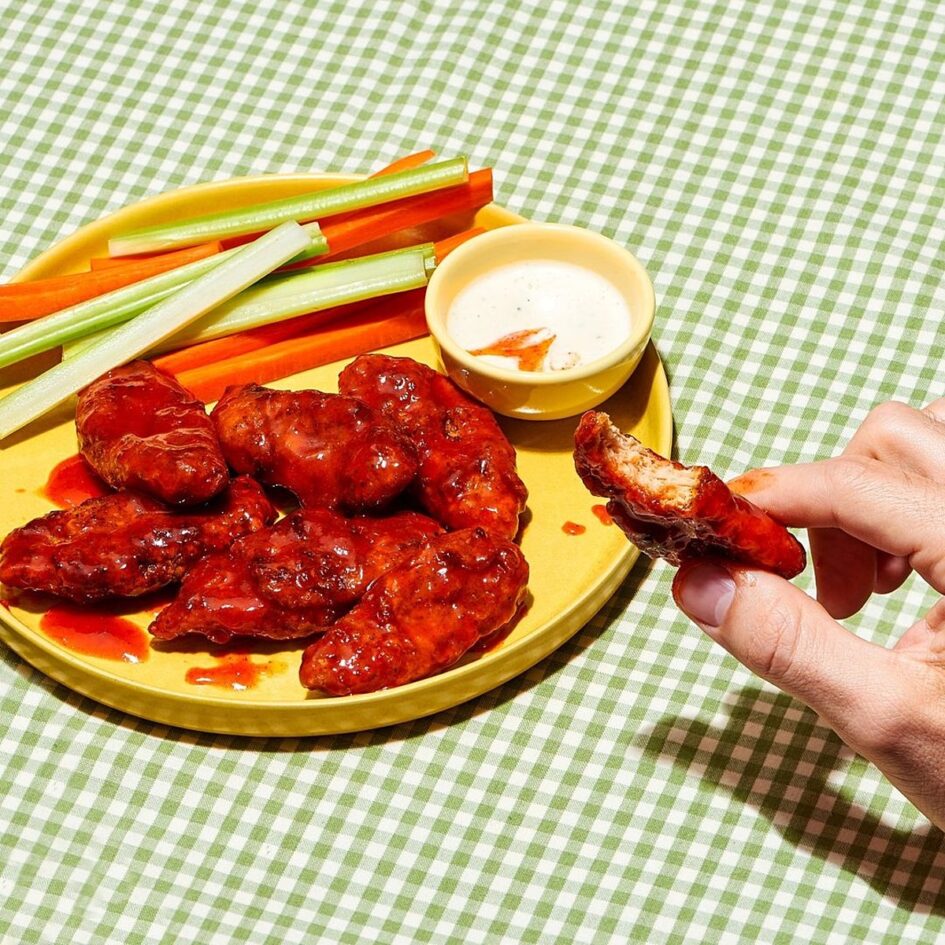 Drake-backed vegan chicken company Daring Foods just announced that its signature products will soon be available across the foodservice sectors. The company revealed that its vegan chicken will be featured at restaurants in New York City, Miami, Las Vegas, and Los Angeles. The expansion marks the first time Daring Foods’ plant-based chicken will be widely available in the foodservice sector.

Daring launched to create a plant-based chicken that could be cooked just like a conventional chicken without sacrificing the juicy texture and adaptable flavor reception. The company – launched in 2018 by Ross MacKay and Eliot Kessas – aims to eliminate the need for poultry in the food systems. Daring’s signature chicken alternative consists of soy protein, sunflower oil, and spices to best replicate the taste and texture of conventional chicken. The company also recently revealed Cajun, Lemon & Herb, and breaded versions.

Where to Buy Daring Vegan Chicken

Another Los Angeles-based restaurant, Delilah, will also introduce plant-based chicken into a staple menu item. The restaurant developed a Plant-Based Chicken Fusilli to showcase the innovative vegan chicken. The pasta dish will consist of butternut squash, herbed butter, and crispy kale. The pasta dish is currently only vegetarian due to the inclusion of butter.

Miami’s Coco Toyo introduced its new “Pollo” al Carbon Tacos filled with pico de gallo, salsa fresco, and queso that can be removed and the “Pollo” Milanesa Torta that features a baked bolillo roll, black beans, avocado, pico de gallo, chipotle aioli, pickled jalapenos, and onions. The aioli and queso can be omitted for a vegan order. Both new tacos will feature the signature vegan chicken, and consumers will be able to add the plant-based protein to salads, quesadillas, burritos, and burrito bowls.

The Daring foodservice expansion will also benefit from a partnership with Groot Hospitality in Miami, facilitating its distribution to four staple Miami restaurants. Komodo will feature the Daring chicken in its Plant-Based Kung Pao Chicken mixed with shiitake, bok choy, lotus root, Sichuan peppercorn, and cashew; and its Plant Based Chicken Kimchi Fried Rice with pineapple kimchi, scallion, and togarashi. Strawberry Moon will incorporate the new vegan protein into several signature meals including kebabs, tacos, and wraps.

Winker’s Diner revealed its new vegan Chicken Pot-Pie complete with coconut milk cauliflower, mushroom, and carrot. The fourth restaurant, Sushi Fly Chicken, will present consumers with a new Plant-Based Chicken Rice Noodles with bok choy, bell pepper, and broccoli. The partnership with the Miami restaurants will give Daring foods the opportunity to highlight its plant-based chicken’s versatility in the kitchen, especially across the food industry.

Ahead of the foodservice announcement, Daring Foods secured $65 million during its Series C funding round, bringing the company’s total investment value to $120 million. The investment round was led by Founders Fund and included previous investor D1 Capital Group alongside Drake, Naomi Osaka, DJ Steve Aoki, Chase Coleman, and Cam Newton. Daring intends to continue its product distribution across both the foodservice and retail sectors, meeting the growing consumer demand for plant-based chicken.

“I don’t think this is a trend, but the future of food, and we are excited to lead in chicken,” Mackay told TechCrunch. “More brands can step into the category, and the innovation going on in the space is super exciting. Capital plowing into the industry is showing the growth trajectory, and at the end of the day, the consumers win.”

Following the investment round, the company announced that it would expand its retail partnerships with Walmart, launching its frozen products at nearly 3,000 locations. The partnership will double the company’s current retail distribution to approximately 6,000 retail stores nationwide. The company previously began distributing its vegan chicken to Whole Foods, Wegmans, Kroger, and Sprouts Farmers Market.

Earlier this year, Daring announced that it teamed up with North America’s largest food redistributor Dot Foods. The company announced that this partnership would enhance its distribution range, making the plant-based chicken more accessible to consumers nationwide.

“When we launched daring, we created the brand with a mission to eliminate chicken as a form of protein in our food systems,” Mackay said in January. “Partnering Dot Foods allows us to rapidly propel new avenues for the brand, providing more consumer access to our signature daring pieces that are better for you and better for the environment.”