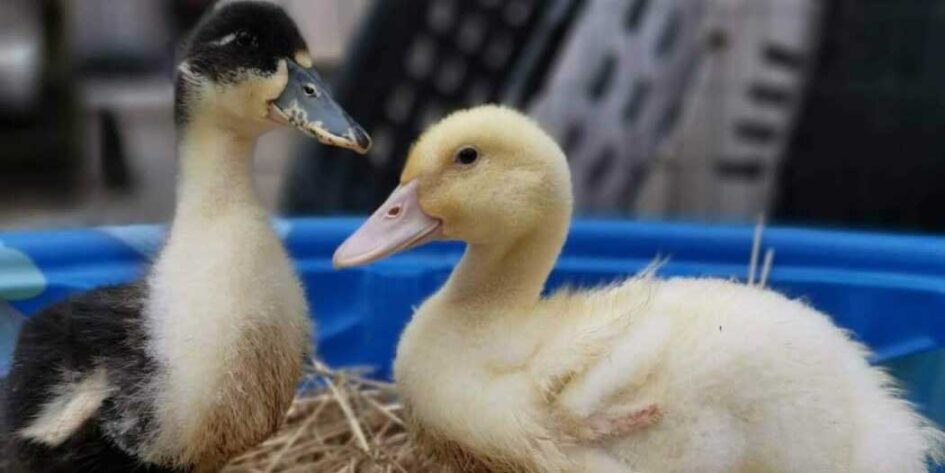 For every “Where can I buy ‘pet’ ducks?” search on Google, there’s an alarming number of “Where can I give my ducks away?” queries to match. Many people buy ducklings on a whim, only to discover that caring for them is more work than expected—and the birds end up neglected or abandoned.

Discover why the answer to “Can you keep ducks as ‘pets’?” is NO. They, like all other animals, should never be bought, sold, or bred. Ducks aren’t “pets” at all.

In nature, ducks are outgoing, social animals who prefer the company of many duck friends. They spend their days looking for food in the grass or in shallow water, and they sleep with their paddling-mates at night.

Many ducks travel hundreds of miles each year during their migrations. They fly in formation for protection and to reduce air resistance. They can fly at speeds of up to 60 mph!

By contrast, ducks bred for the pet trade (as well as for the meat industry) typically come from massive hatcheries where their parents are confined by the thousands to dark, dank sheds. They’re denied the chance to swim in a pond, roam, or forage. Because of breeding practices, most of them don’t even have the ability to fly.

Male ducklings don’t lay eggs, which means that they’re not as desirable in the pet trade and are often ground up alive or killed in other cruel ways, just like male chicks in the egg industry. Ducklings who aren’t killed at hatcheries are shipped across the country when they’re just a day old, typically without food or water, to pet stores and even hardware stores like Tractor Supply Co. Some hatcheries throw in a few bonus ducklings, because so many of the baby birds are killed during these traumatic trips. A PETA video exposé of duck farms in Indiana revealed how some ducklings, like this one, died just hours after hatching.

And did you know that while ducks in nature are extremely sexually aggressive during mating season, domesticated ducks (those bred by humans) may exhibit this aggression year-round? If distributors and sellers—and purchasers, too!—don’t take precautions like separating males and females (as well as dominant males and weaker males), fights, injuries, or even deaths can result.

Yes, everywhere—and often! Ducks typically relieve themselves about every 10 to 30 minutes, and they can’t be trained to do so in a particular spot, so their living areas need to be cleaned multiple times a day.

Ducks need specialized feed. Feeding them generic fowl feed will cause them to develop disabilities.

Because of selective breeding by the pet and meat industries, domestic ducks typically cannot fly, yet most retain their natural instinct and urge to fly. It’s another way these industries make ducks suffer.

“Pet” ducks need a lot! A lot of time, a lot of maintenance, a lot of patience, and a lot of money.

For Those Googling “How Do You Take Care of a ‘Pet’ Duck?”

“Pet” ducks require careful, specialized care. Without it, they suffer from serious and painful health problems, including crippling and deadly niacin (vitamin B3) deficiency …

… wry neck (when their head is turned upside down because of a vitamin E deficiency), or angel wing (when their flight feathers grow too fast and out to the side). All these conditions can be caused by an inadequate diet. Bumblefoot infection—a foot issue caused by hard-surfaced floors—is also common among ducks kept as “pets” and can be fatal.

Ducks need specialized care from a veterinarian with avian expertise, which can be difficult to come by—and is often more costly.

They also need specialized feed that can be hard to find. The junk that places like Tractor Supply Co. sell is just that—junk.

Baby ducklings need artificial heat, but the heating lamps that many people use have been known to cause house fires.

Kiddie pools are often used as a “pond” for ducks, but small plastic tubs like this aren’t ideal. They need to be cleaned twice per day, at least, which is why a large, naturalistic pond is strongly recommended.

At night, domesticated ducks must be locked inside predator-proof coops to protect them from owls, coyotes, foxes, raccoons, and other animals. One of the most common problems with keeping “pet” ducks is that they’re killed by predators—which surely wouldn’t give the child you bought the bird for the warm fuzzies.

In just the last nine years, the folks at Long Island Orchestrating for Nature (LION) have rescued thousands of ducks and ducklings. Most of these birds were bought as “pets” but were later abandoned, probably once the novelty wore off and the hassle of caring for them every day set in.

Each year, thousands of domesticated ducks are dumped outdoors, where they stand virtually no chance against predators, starvation, weather extremes, and other perils.

How Long Do ‘Pet’ Ducks Live?

When they’re not killed in hatcheries, slaughtered for food, or abandoned, ducks can live up to 20 years. People who buy ducks and ducklings often do so on impulse and have little to no knowledge of their special needs for space, heat, expert veterinary care, clean water to paddle around in, and more. Many buyers’ interest and commitment lasts only days or weeks—not years—and many ducks are neglected or abandoned as a result.

How Much Does a ‘Pet’ Duck Cost?

Ultimately, the cost of buying a duck is the bird’s very life.

If you have the commitment, time, money, compassion, and patience necessary to care for a duck for life, please, adopt—never buy a duck or any other animal. If you’re prepared to meet a companion animal’s many needs but building a naturalistic pond in your backyard isn’t quite your thing, perhaps consider adopting a dog, cat, or rabbit instead—an animal who can thrive when properly cared for in a human home.